I was sent the Vaxza iPhone 6 Battery case to show off to readers and fans even though I didn’t have the ability to actually test it as I don’t own an iPhone 6.  I was however able to make a smart assessment and observation of the case which is an iPhone 6 case plus it has a 3100mAh capacity battery built in.

You can see my video unboxing and showing it off here:

For those who don’t have time to watch the video, there are some interesting things about this case the first is that you can leave it on your phone all the time even when you have to charge the case itself and the phone inside of it.  The 2nd is that the case takes a regular MicroUSB cable, so while you have your iPhone 6 inside this case you can charge your phone with a MicroUSB cable instead of a Lightning cable.  This was an odd but welcome decision as I have 5x the MicroUSB to Lightning devices in my house so having 1 MicroUSB cable be able to charge my iPhone 6 is a huge plus. 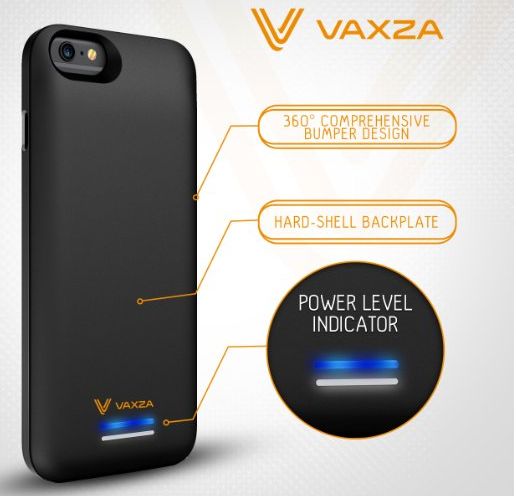 By default the battery is off, but if you notice your phone start to get low on battery or you just want to charge it, you can press the power button on the case which has a blue horizontal light indicating how much charge the 3100mAh battery inside the case has.  This battery case promises an additional 14 hours of talk time and 10 hours of web surfing time and is a great way to keep emergency battery on the iPhone 6 itself. It only extends the length of the phone by a little and adds virtually no additional width with the edge bumper.

Now, because the case extends past the bottom of the phone, it includes an audio extension jack since the audio cable has to fit deep into the case to reach the iPhone this may be the only annoyance for some people but I wouldn’t find it to be an issue as I use Bluetooth devices mostly myself.

Need both an iPhone 6 case and extra battery capacity, then take a good look at the Vaxza iPhone 6 Battery Case

Disclaimer: Vaxza sent me the iPhone 6 Battery case so that I could unbox and feature it to our readers. I had informed them I had no iPhone 6 to actually test/review it and this would be a feature/showcase and not a true review. All opinions are 100% mine and mine alone. I am also going to give the case away on Facebook in a flash giveaway since I have no need to keep it, so make sure you follow Dragon Blogger Technology on Facebook and subscribe to all updates.