Today, we’re going to take a look at the Fiio F1 IEM or in-ear motor. F1 is Fiio’s take at the budget IEM market, and they’ve also introduced a more powerful IEM called F3. These both IEMs falls under the $30 range. So, let’s go ahead and test this budget IEM out. 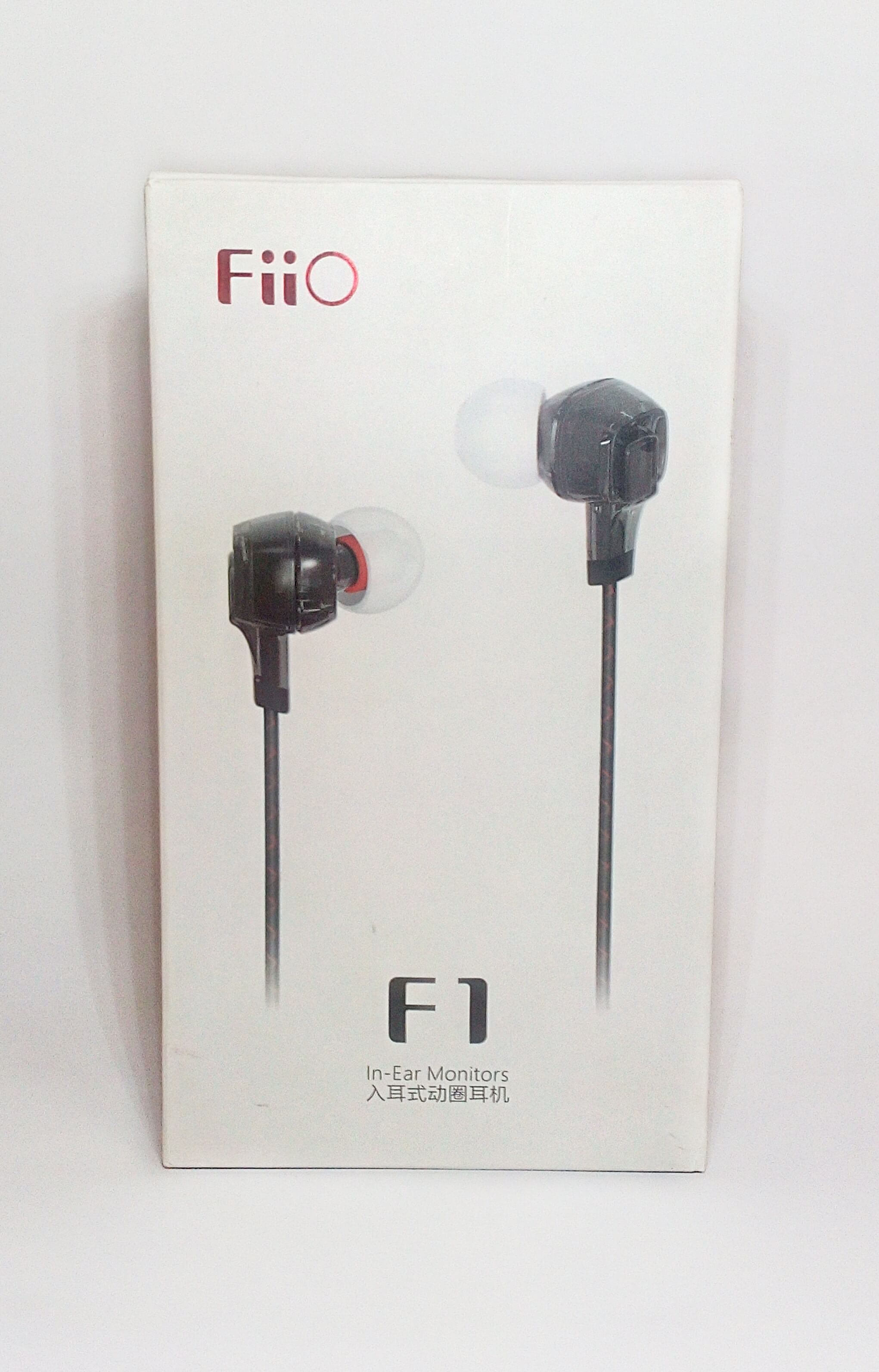 The Fiio F1 comes in a rectangular white box. On the front, we can see the picture of the Fiio F1, brand’s Logo and the model name of the IEM mentioned. 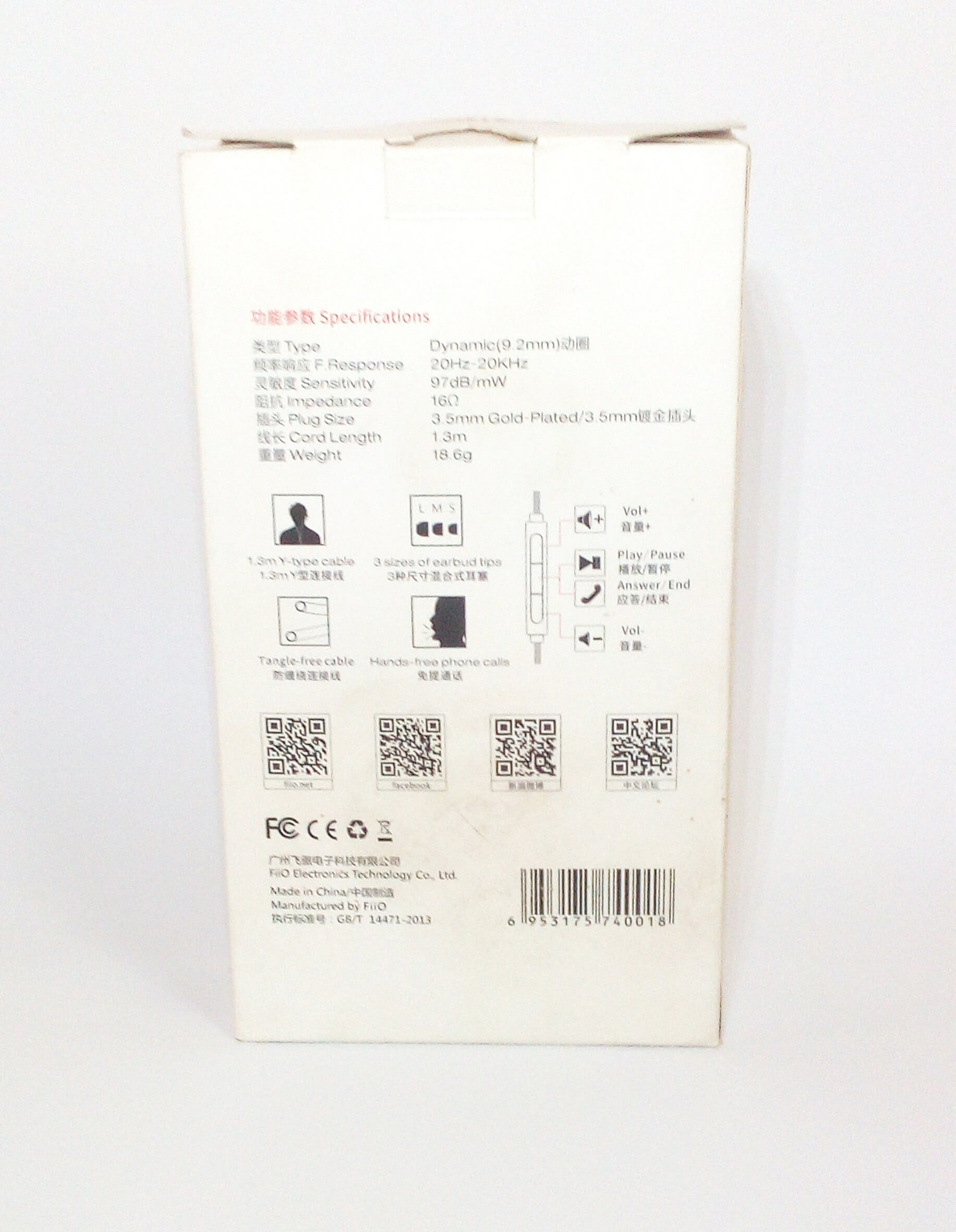 On the back, we have some detailed specification and features of the F1 IEM. 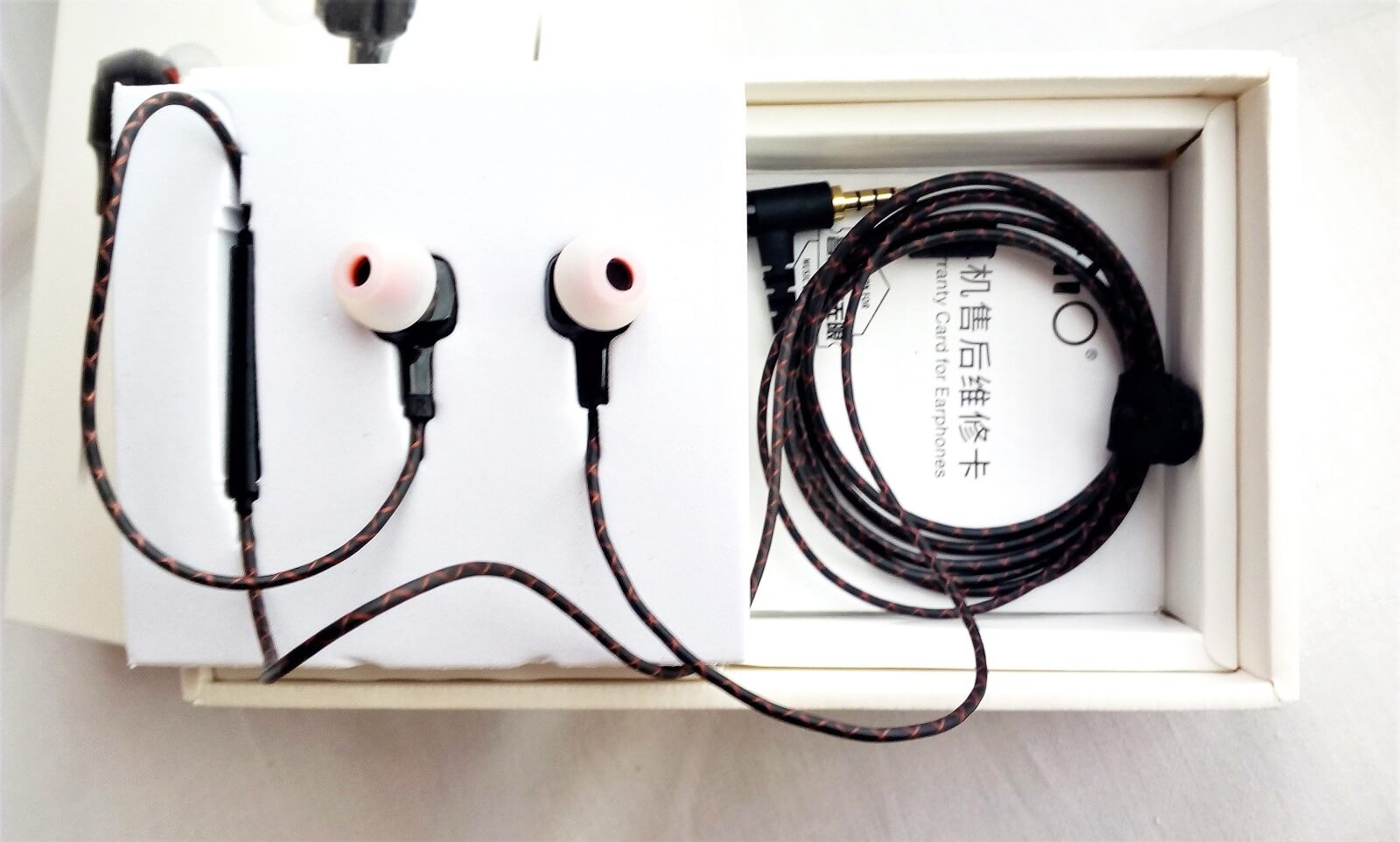 Once you take off the top, you can see the Fiio F1 earplugs and the in-line controller held in place by a Styrofoam while the rolled wire can be seen in a separate compartment. Also, the instruction manual can be seen in the same compartment underneath the mass of wire. 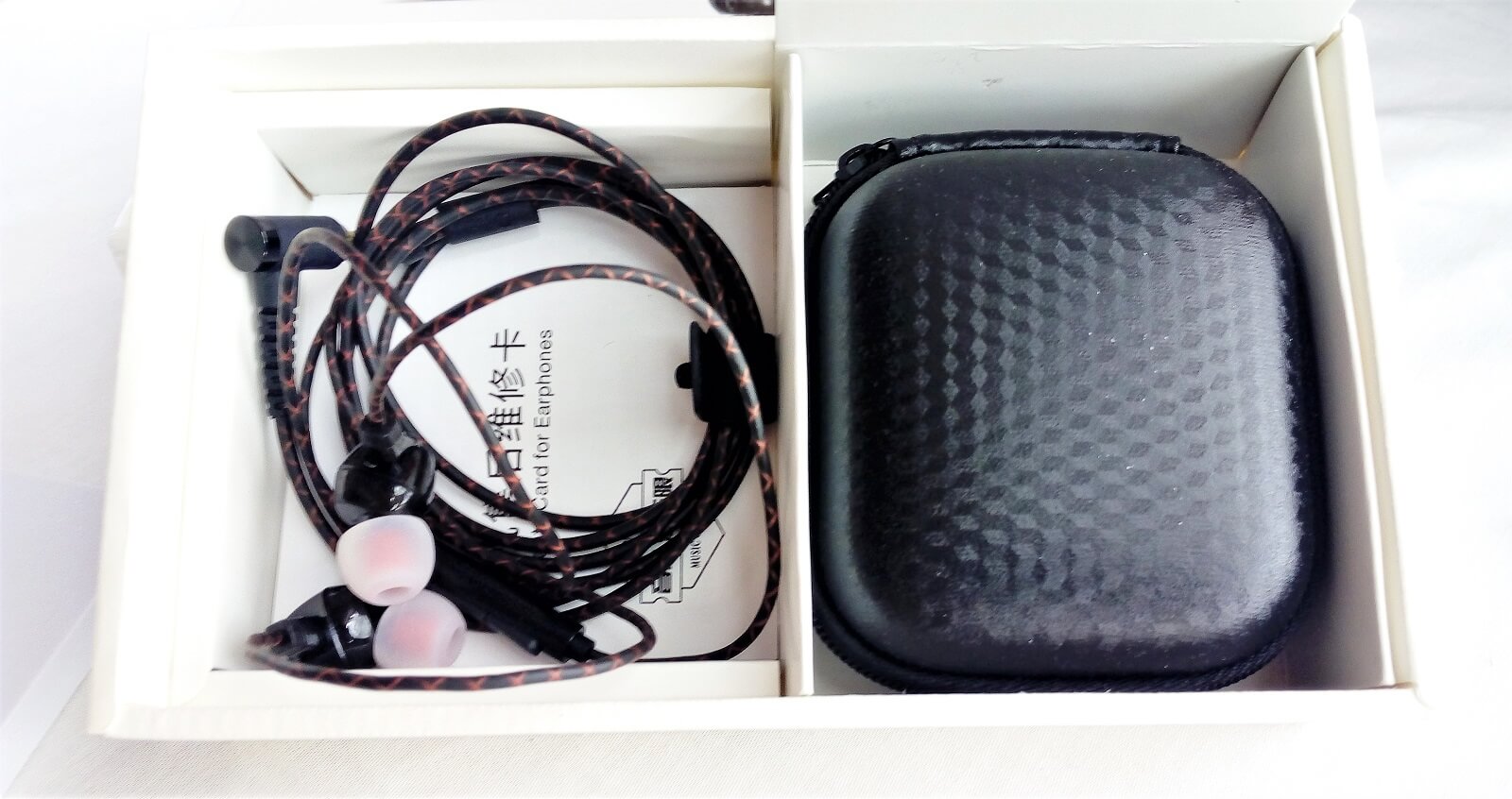 Removing the Styrofoam reveals a leather carrying pouch for the F1 IEM. 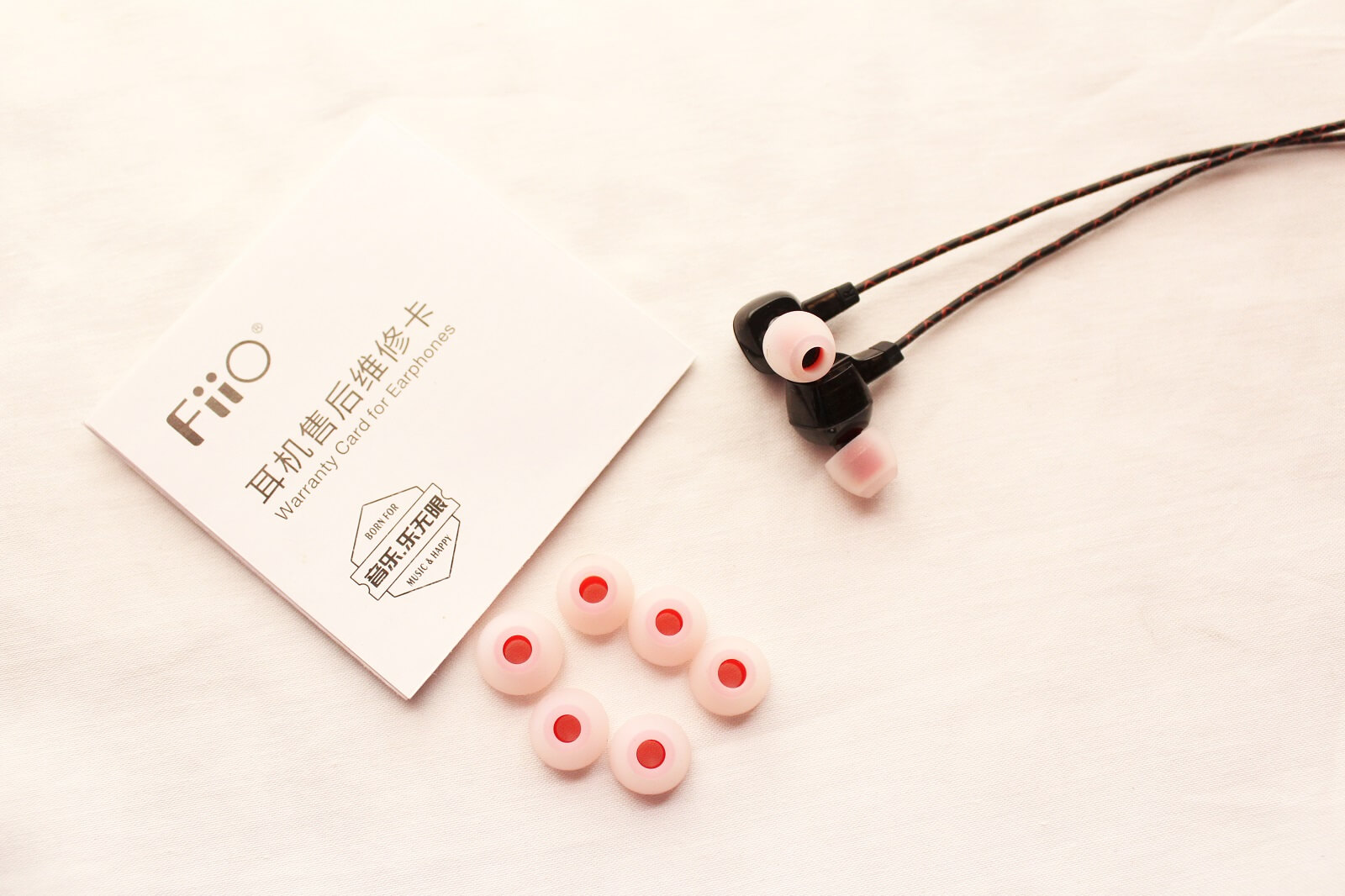 Opening the pouch unveils the different size medical-grade silicone ear tips for the F1 that also helps in producing different sound signatures. Do note that these ear tips were placed in a small polythene bag. 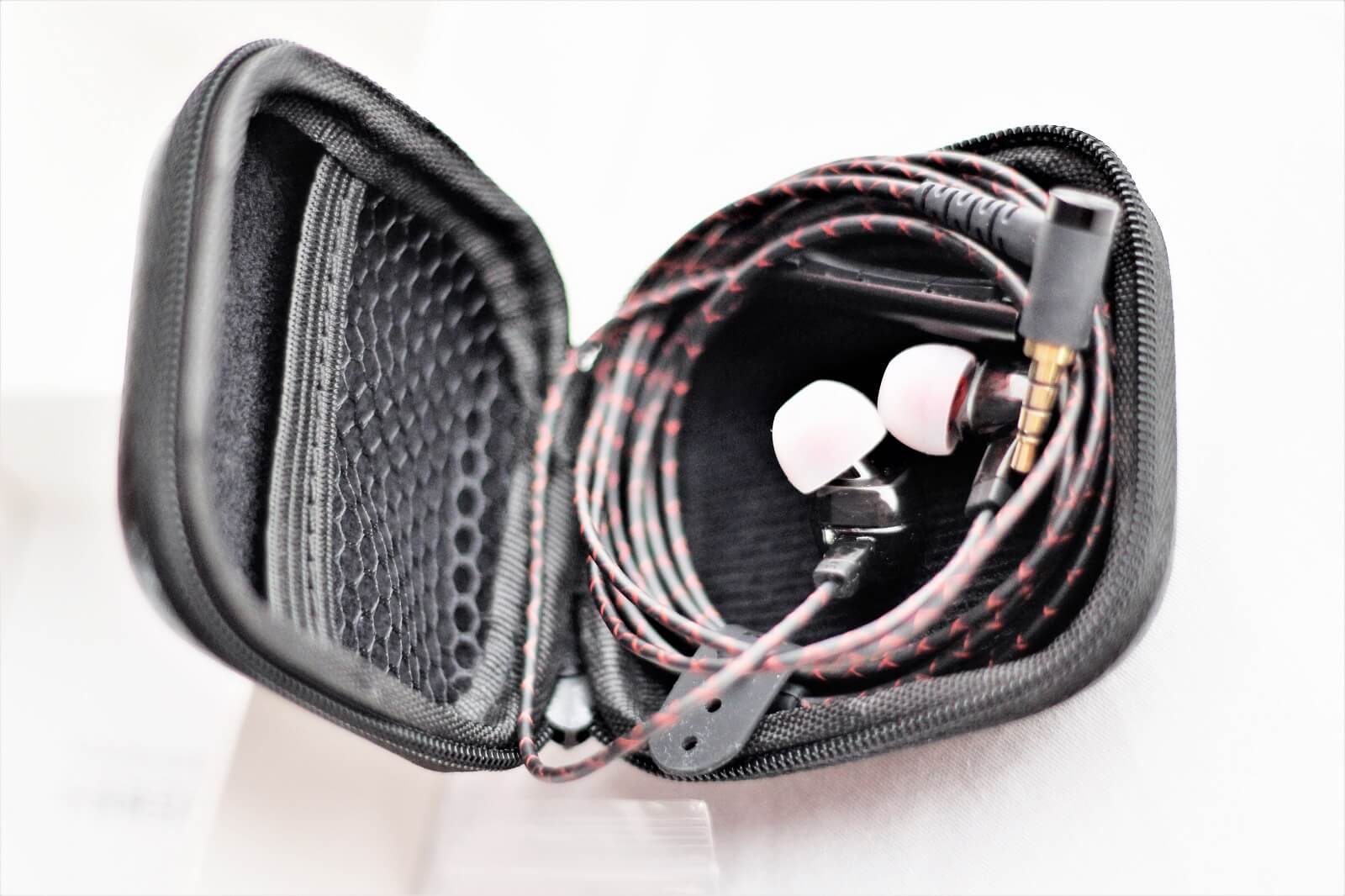 The F1 earbuds feature a 45-degree angular body which helps in better grip and fit. This design is what Fiio says came after much research on the human ear canals and seemed to be the best option for comfortability. Other than that, the earbud body has a gloss finish, while the left and right bud can be differentiated by the small “L” and “R” marking. Also, the ear tips have a translucent on top but have a red touch below creating a beautiful red/white accent. 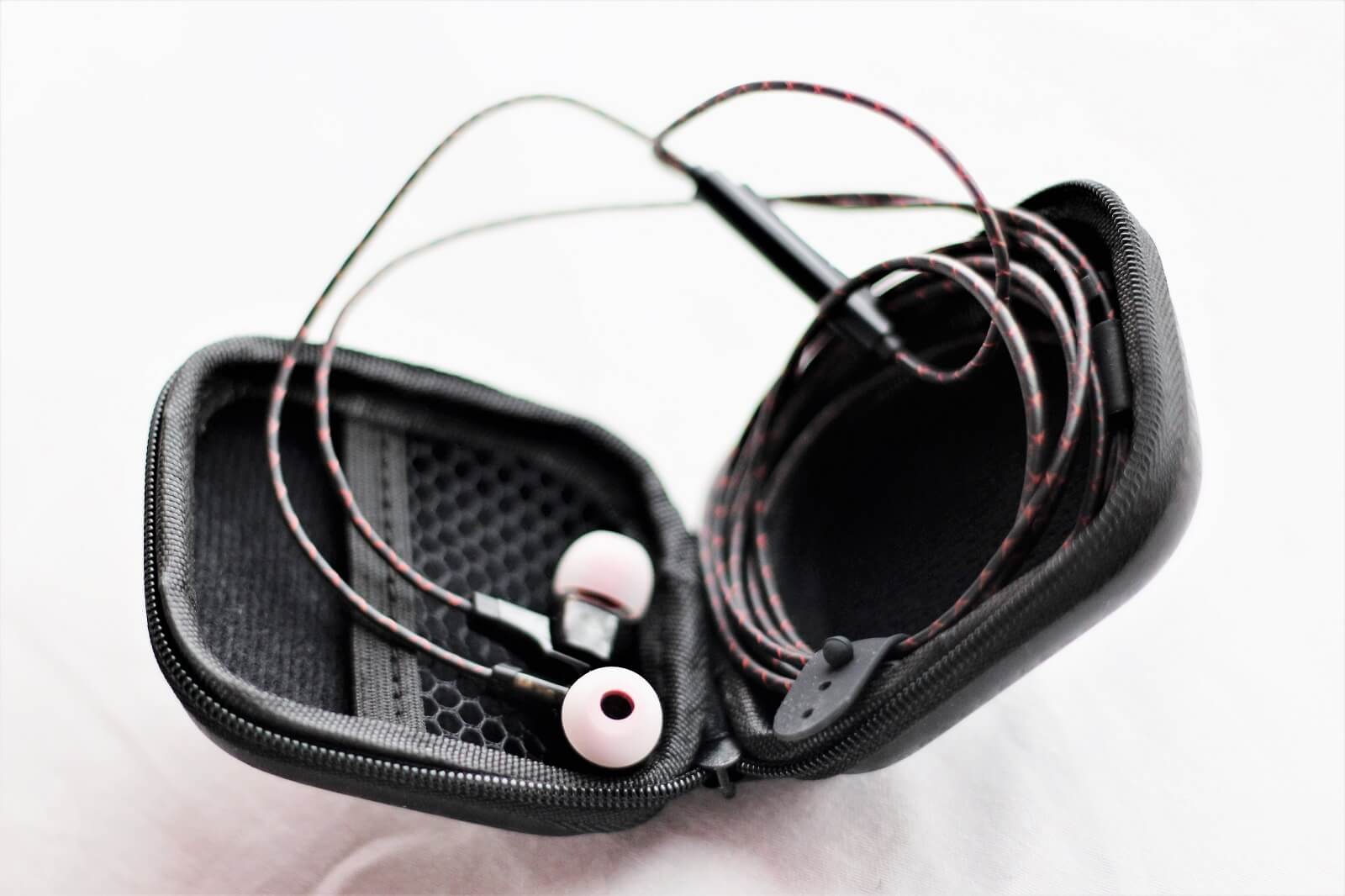 The cable of Fiio F1 is about 1.2 meters long, and Fiio is using lightweight polyurethane material for the wire. As mentioned on the website, the cable is very flexible and lightweight, and it doesn’t feel like I’ll be snapping or breaking the wire inside anytime soon. In another sense, I feel somewhat safer with the wire quality of Fiio F1 which doesn’t happen often. Also, at first look, the cable seems like braided due to the red pattern on the wire, but once you touch it, you can feel the polyurethane material. 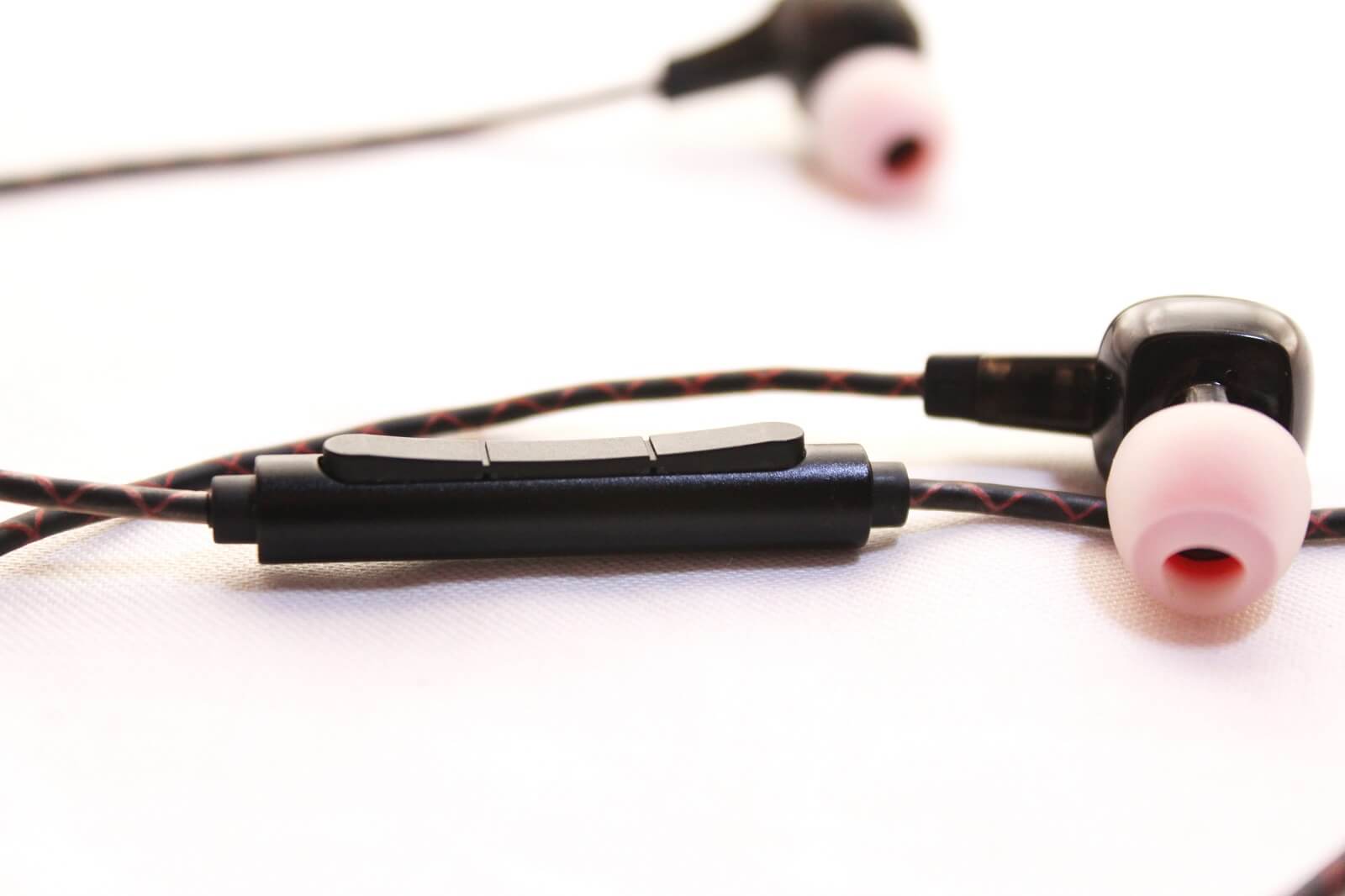 The in-line control features a gloss finish. It has a total of 3 buttons with various functions. The top button works as volume+ while the middle button works as pause/play and the lower button is for volume-. Fiio mentions that the volume adjustment is not available for iOS devices, but I found that it’s also not available on Android 4.4 platform. On Android 4.4, it was working as next and previous tracks, while on Android 6.0, these buttons don’t work as next and previous tracks at all. So Fiio do need to figure out how to make the in-line control work for both volume controls and media controls. Also, the  top button works as pick up and end all on one click while refuse if kept pressed for a while. 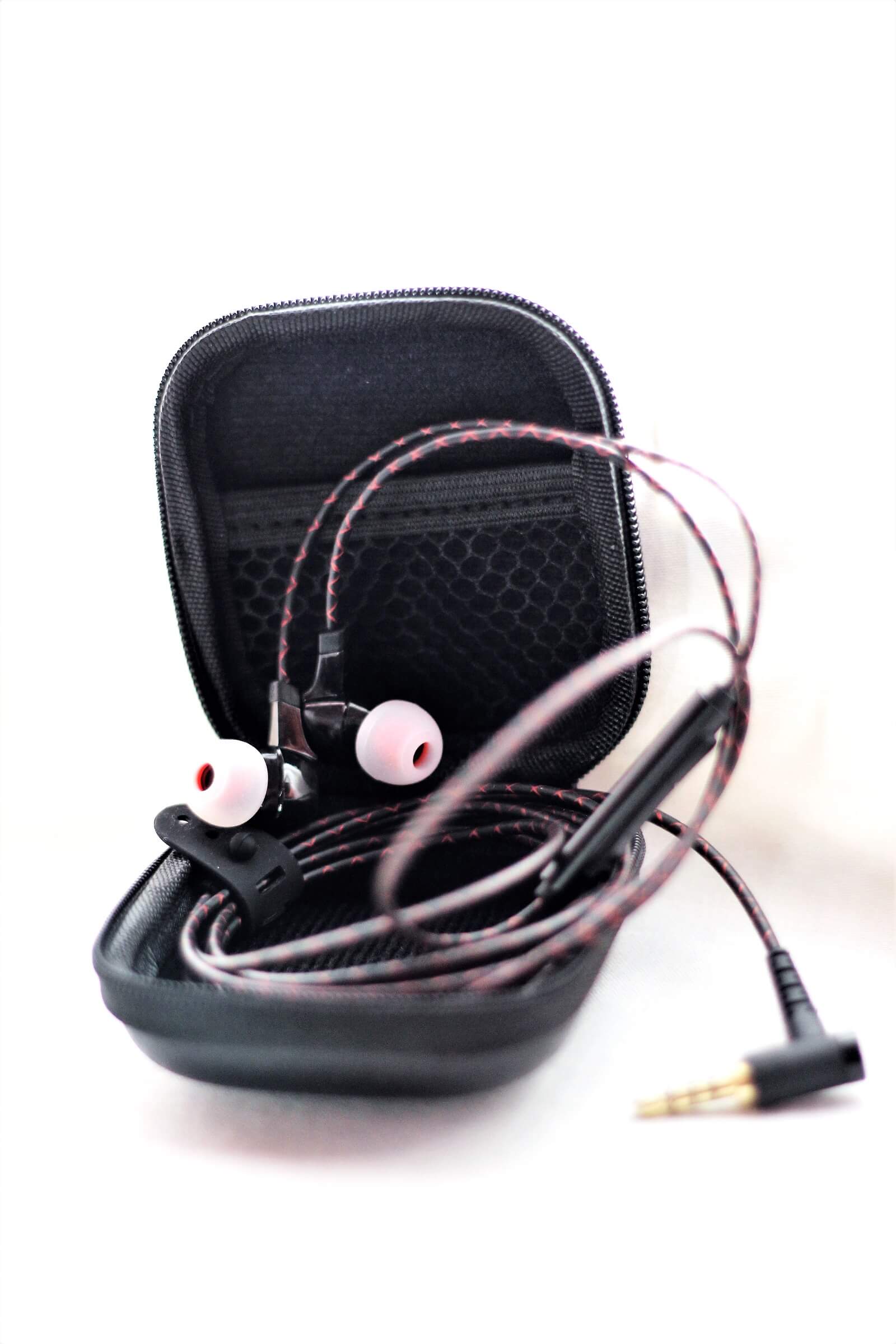 The Fiio F1 features a 3.5mm audio jack, making it compatible with almost any smartphone or device that features a 3.5mm audio port. I’ve been using it with my Android smartphone, and there’s no sign of signal loss so far. Also, the connector is L-shaped which makes it a lot easier and safer to use with your smartphone in your pocket. With straight connectors, you might end up removing the cable while taking out the phone or damaging the cable while exploring your pocket but with the L-shape connector, that’s a problem of the past. 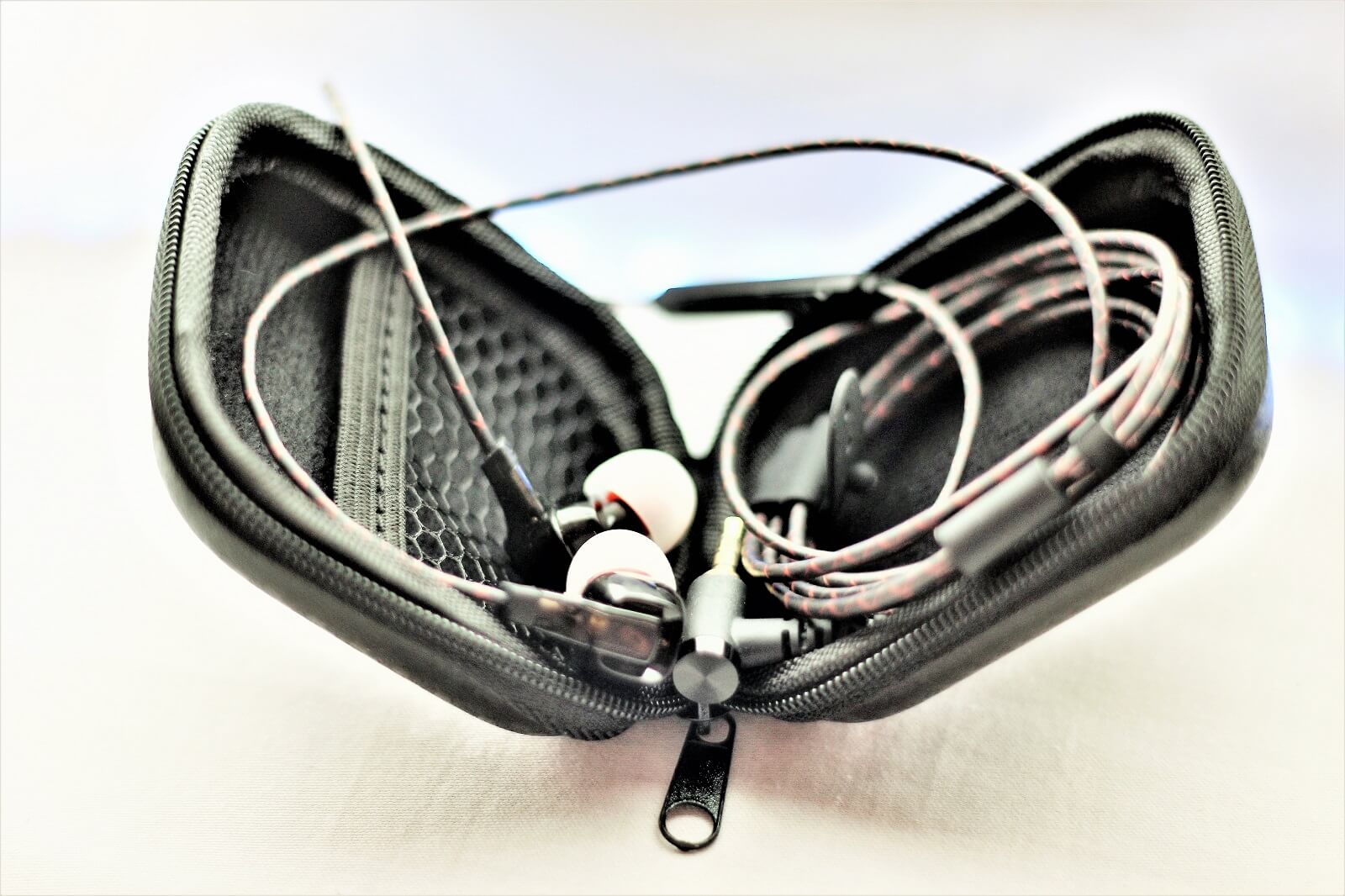 As for the pouch, it’s leather made and feels very sturdy. It features a zipper for closing and opening, and you can also attach it to a keychain. There’s enough room to hold the F1 inside once you roll it up. Also, there’s a divider with a net on one side of the pouch so you can keep the extra ear tips in there as well. 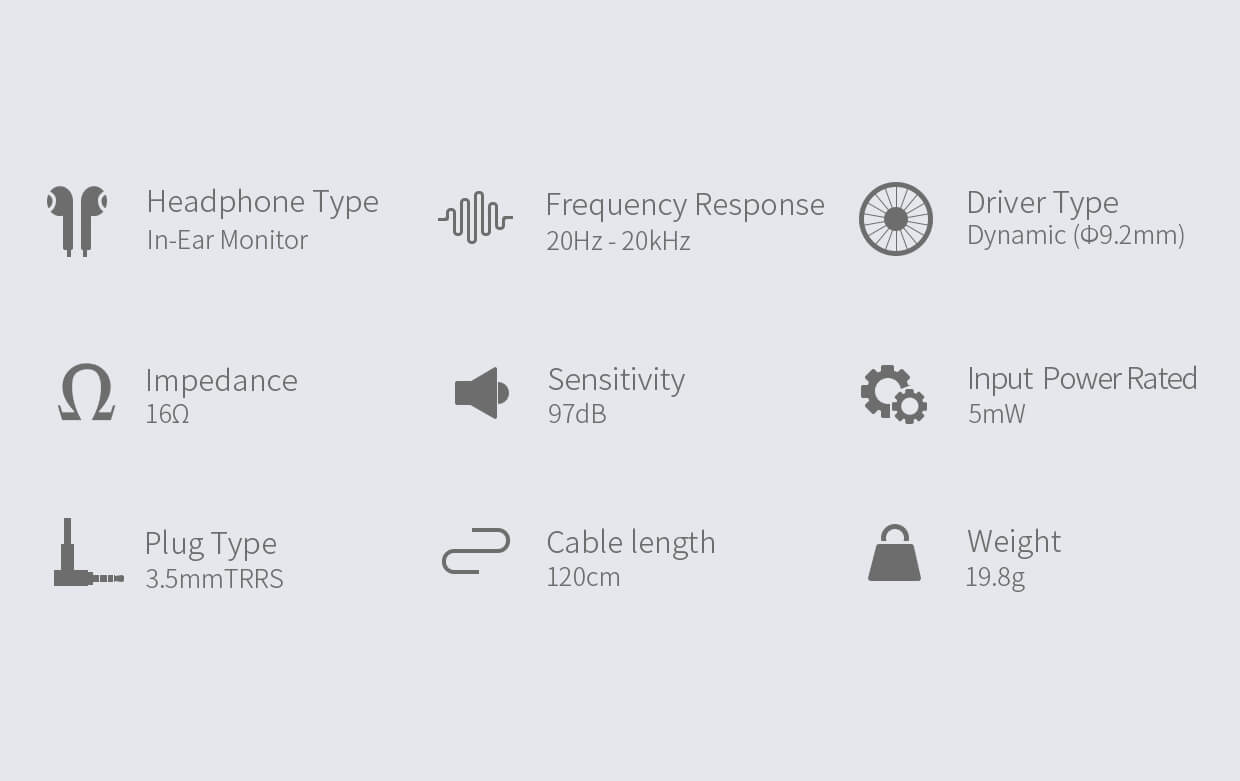 I found the Fiio F1 IEM to be comfortable enough to squeeze out 2-3 hours, but after that, the IEM becomes annoying and start hurting the ear. Same is the case with most of the IEM/earphones out there. So, In the end, it comes down to how long one can endure the earbuds. I can only keep earphones in my ear for as long as 2-3 hours before I need to re-adjust them in short periods for comfortability. Also, the 45-degree angular shape helps keep the IEM in position even during jogging or exercising.

Other than that, I found the earbuds of Fiio F1 very lightweight, and since each piece weighs only about 2.4 grams, they disappear very quickly. Also, the cable is very lightweight that you won’t feel it hanging from your ears. If I were to subtract my personal endurance level of an earphone, I would like to say the Fiio F1 is comfortable and convenient.

Convenient as in, there’s no way you will end up putting up the left earpiece in your right ear. That’s because of the 45-degree turn on the body. It simply won’t fit so you’ll know you’re putting it in the wrong ear. Also since the in-line controller is on the right ear wire, not below the divider, that’s another sign to help you out in figuring which earpiece goes where.

And there’s also a slider present above the divider so you can adjust the cable separation length.

The smartphone I used with Fiio F1 were Landvo S6 and Bluboo Edge.

The Fiio F1 is using an ultra-lightweight 9.2mm polyester driver diaphragm and Japanese copper-clad aluminum voice coil. Compared to some of the previous earphone I’ve had the opportunity of listening to with similar sized drivers, the Fiio F1 is pretty warm, relaxing and easy going. The F1 has a decent punchy bass impact which is well controlled and doesn’t overpower anything. The bass quality and overall audio quality is better than the Luxa2 Lavi X Bluetooth earphone I’m using right now. The mid is very good and sweet to listen to and very clear on the vocals. It somewhat feels like the vocal is the highlighted more than the treble in comparison which I found somewhat lacking overall. The highs are pleasant and smooth but a bit laid back compared to mid and low. The overall sound quality and soundstage are pretty relaxed and easy going. In comparison, it is still one of the best budget IEM I’ve used so far.


The Microphone of the Fiio F1 is very clear as my voice can be heard clearly even when the microphone is in default length position, but there’s alot of background noise being captured as well that can be annoying.

So, I’ve been using the Fiio F1 IEM for a month or so by now, and I’m pretty pleased with the result. The Fiio F1 is comfortable, and the cable is very lightweight that makes the whole earphone disappear real quick. It also comes with different 3 different sets of medical-grade silicone ear tips which not only provides a better option at ear comfortability, but they also help in producing different sound signatures.

The Fiio F1 is available in the market for an MSRP of $15 which makes it a budget IEM. And for the value, I think you’re getting a perfect deal. At an MSRP of $15, I think this is one of the best budget earphones I’ve used so far. Though they still need to make the best out of the in-line controller.