LOS ANGELES, June 30, 2016 /PRNewswire/ — FINAL FANTASY® BRAVE EXVIUS®, the entirely new FINAL FANTASY adventure for mobile devices, is now available in the US and worldwide. The free-to-play app (with in-app purchases) fuses the epic features of all FINAL FANTASY titles, including captivating story, strategic turn-based gameplay and the legendary conflict between heroes and foes with modern streamlined battle mechanics and intuitive touch controls. Appealing for both newcomers and long-time fans alike, the game has already found resounding success in Japan, with more than 6.5 million players. 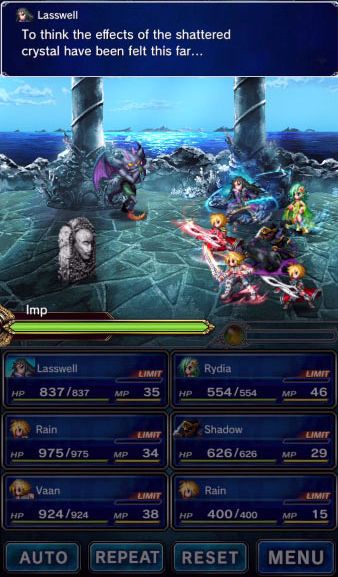 This version includes the following:

New items and daily quests
High-definition graphic support for tablet devices
Achievements and Leaderboards
Game balance refinements based on the Japanese version
Facebook Login Integration
Two types of bundles for purchase:
“Early Bird Bundle” (a one-time purchase at $3.99) will be available at for beginners who wish to grow their characters at a faster pace
Other bundles available regularly for purchase for players to obtain characters and items quicker
Adventurers begin their quest for a highly-coveted crystal, shortly meeting two knights from Grandshelt, and a young girl. With special appearances by classic FINAL FANTASY characters like Cecil, Vivi and Terra, players adventure through fields and dungeons discovering items, collecting gil, uncovering hidden paths, and unlocking high-quality CG-animated summons.

Players can download the game through the following links:

This title is developed as a collaboration between SQUARE ENIX® and gumi Inc. (developer of the hit title Brave Frontier). The game will launch in six languages: English, German, French, Spanish, Chinese (traditional), and Korean.

The free-to-download “FINAL FANTASY Portal App” provides the latest and greatest on all things FINAL FANTASY, as well as exclusive promotional trailers and developer commentary. By logging-in with their Square Enix account, players can accumulate points that can be exchanged for various items. Also, the iconic Triple Triad card game from FINAL FANTASY VIII makes its mobile debut, and is playable in the app.

More information on Square Enix, Inc. can be found at http://na.square-enix.com/.

Founded in 2012, gumi Inc. is a leading global mobile game publisher and developer headquartered in Japan, with overseas operations in China, France, Korea, Singapore, Taiwan and the United States. The company has proven success in launching titles worldwide, such as the widely popular role playing games Brave Frontier and Phantom of the Kill. With ongoing publishing and development projects on various platforms, including iOS, Android, and more, gumi aims to change the world through innovative entertainment products and services, including both original content and collaborations with popular IP. For more information, please visit http://www.gu3.co.jp/en/home-en/ .

Content Creator/Owner of https://t.co/iWP6afuOc9 for Tech, Game, Entertainment and streamer at https://t.co/594fXMdMIA
Special deal right now on the Okaysou AirMic4S Medical Grade Air Purifier which can clean up to a 300sq foot room.… https://t.co/ApNUwbmdS8 - 6 hours ago