Just earlier in the week I noticed that my feeds haven’t’ been updating in a few days, this is one good reason to be on your own RSS feed mailing list as you can make sure you notice if there is a problem before too much time elapses.  (I just wasn’t paying attention as I don’t check my own feeds that often). 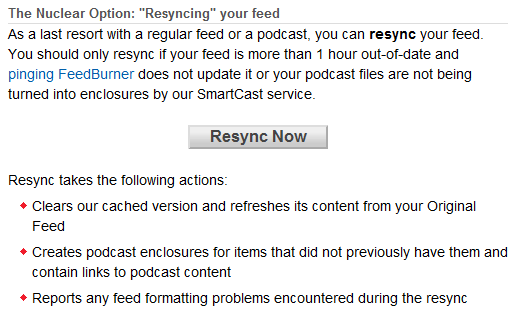 Ironically my feeds weren’t updating and I searched Google which ironically led me to my own article that I wrote in November 2009 to fix WordPress Feedburner not updating issues.  I tried every step in my own article to no resolve, but when I clicked on the Troubleshootize and “Resync Now” buttons on Google Feedburner I saw the following error:

Feed Error: Your Feed Filesize is Larger than 512K

I was curious as to the problem, I had switched to Amazon S3 on a few days prior to my feed not updating so I considered this might be related to the issue.  In troubleshooting further I found that my settings in WordPress > Reading were configured to send my last 10 posts to the RSS feed.  As it turns out when you use several images in articles and even with WP-Smush.it to optimize image file sizes, you can easily exceed the Feedburner RSS feed file size limit.

The solution in my case was to drop the # of feeds I was sending to my RSS from 10 to 5, this immediately resolved the problem and allowed me to resync my articles.  I do send full article feeds to RSS, had I only sent summaries I probably could have left at 10.

So if you run into issues with Feed Filesize when sending WordPress feeds to Feedburner, check your last posts to see if there were any large images inserted in the post body, and tweak the number of articles you publish to your RSS, you may want to temporarily lower this number until you can get your image sizes down or get past a single offending post if you have 1 post with a lot of high resolution images.  It turns out this issue was unrelated to me switching to host my content through Amazon S3 but the coincidence had me digging quite a bit until I found the issue.