In a bid to create the thinnest camera possible, researchers at Rice University have developed one without any lenses! FlatCam, invented by the Rice labs engineers Richard Baraniuk and Ashok Veeraraghavan, uses a photo-sensor chip with a mask to modulate the incident light. Unlike conventional lens-based cameras which directly obtain images of the incident radiation, this revolutionary device relies on computer algorithms to re-integrate the incoming bits of data and create pictures. 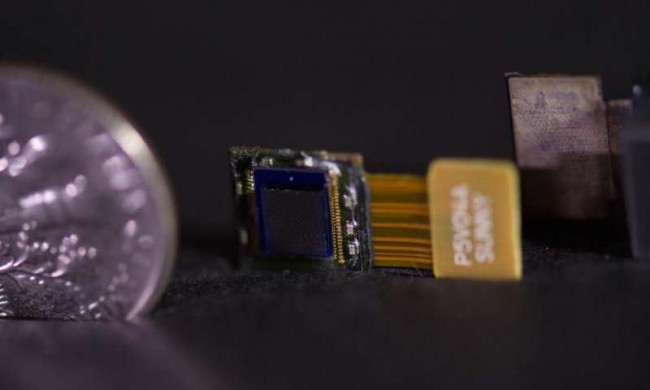 Smartphones and tablets need thinner and smaller cameras without compromising image definition, and conventional lens-cameras need a wide aperture to capture sufficient light. If the aperture decreases, the exposure time needs to be increased in order to obtain a bright image. Currently, algorithms are used to artificially enhance the brightness and saturation of images using programs like Adobe Photoshop and other applications for smart devices.

While handheld device cameras, security cameras and curved surface cameras will become much easier to manufacture using lens-less photographic technology, there are professional photographers who need the huge lenses to have a better control over the photos they take. Automated cameras like web-cams and CCTV cameras can be completely replaced by Flatcam technology, in combination with state-of-the-art image processing algorithms.

The science that makes this lens-less camera work is:

Rice University’s FlatCam – the tiny chip attached to the circuit board — is a lens-less camera that may someday turn large or small surfaces into cameras. Credit: Jeff Fitlow/Rice University.

Much like the early pin-hole cameras which work on interference principle to produce composite images using just a tiny hole and a screen or observer, Flatcam uses an array of micron-sized holes and masks to produce a slightly different digital signal from each sensor, which is then processed by a computer chip using algorithms to develop a human-viewable image.

While the current prototypes do not have a viewfinder screen, the developers say that since smartphones today have quite powerful processors, they can certainly display a low-resolution real-time preview.