This is a review of the Flepow high capacity power bank which not only can charge USB devices but also has an A/C plug for keeping laptops and appliances charged as well. 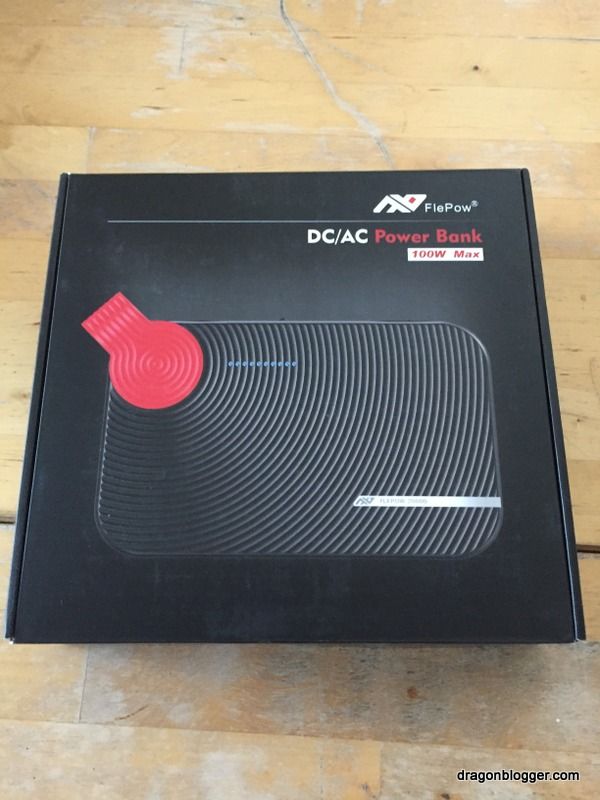 What you get here is an external battery that supports 100W max output when combining the USB + A/C outlet charging, the A/C outlet port is 90W output by itself.  It has an interesting textured top like ripples that prevents slipping while holding the battery and because these ripples are raised above the battery it also reduces how hot the battery feels on your fingers or hands when touching this side because of the gaps between where you are grabbing.  But heat isn’t an issue with this battery at all, when testing and the battery starts to get very warm it has an internal fan that kicks in when the battery reaches about 116 degrees Fahrenheit so that it keeps the battery cool and doesn’t risk it becoming hot enough to cause burns or ignite something.  I have only triggered the fan to come on once with the Flepow battery and that was when I was powering my Acer Chromebook 14 and my wife’s Surface Pro 2 and charging 2 USB tablets at the same time and leaving them all drawing power for 15+ minutes. 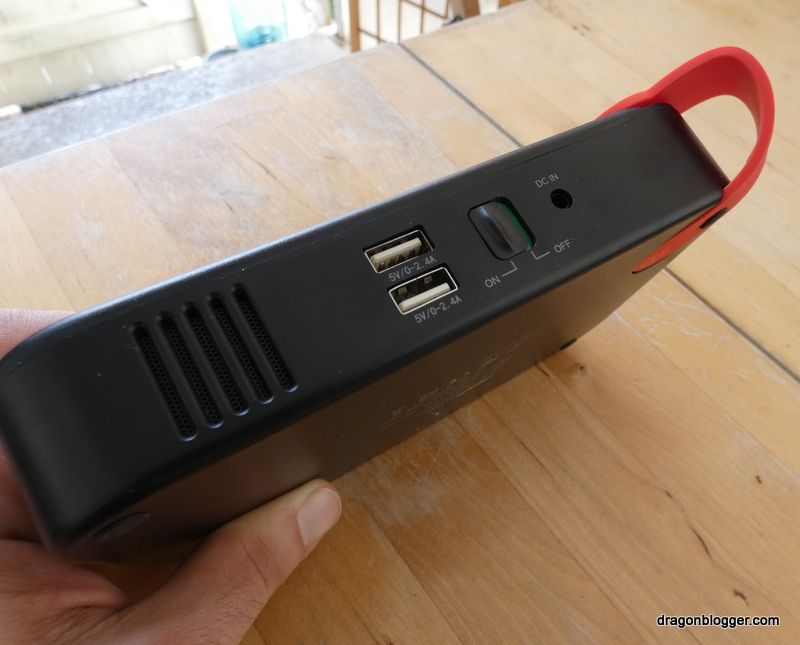 The Flepow 20,000mAh Power Bank has 2 USB ports that are smart charging ports that can output a max 2.4A with their 5V output.  There is a power switch, the DC Input and the heat vent on the same side of the power bank.  The 2.4A output ports are fast at charging USB devices and had no problems charging my iPhone 6, Kindle Fire HDX tablets and other devices very quickly, it however did not charge my Samsung Galaxy S7 Edge as fast as a USB port with Quick Charge 2+ ports.  So it is SMART but doesn’t have the QC charging component for super fast quick charging of QC compatible devices. 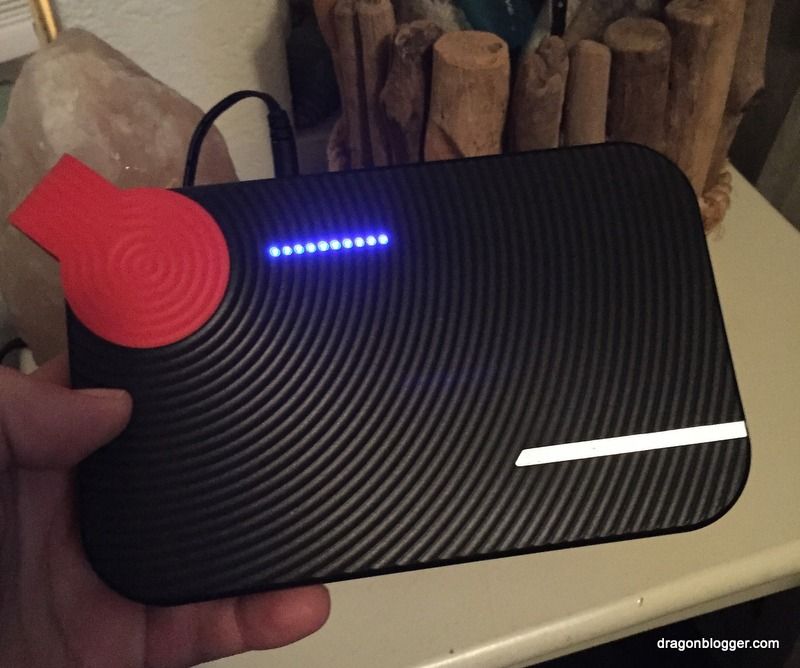 One of my favorite features of the Flepow power bank was that you get a full set of 10 indicator lights for the battery capacity rather than the standard 4 giving you a 25% general accuracy for knowing your power bank battery level.  With the Flepow bank you always know within 10% how much capacity your power bank has left which helps you keep better tabs on your backup power. 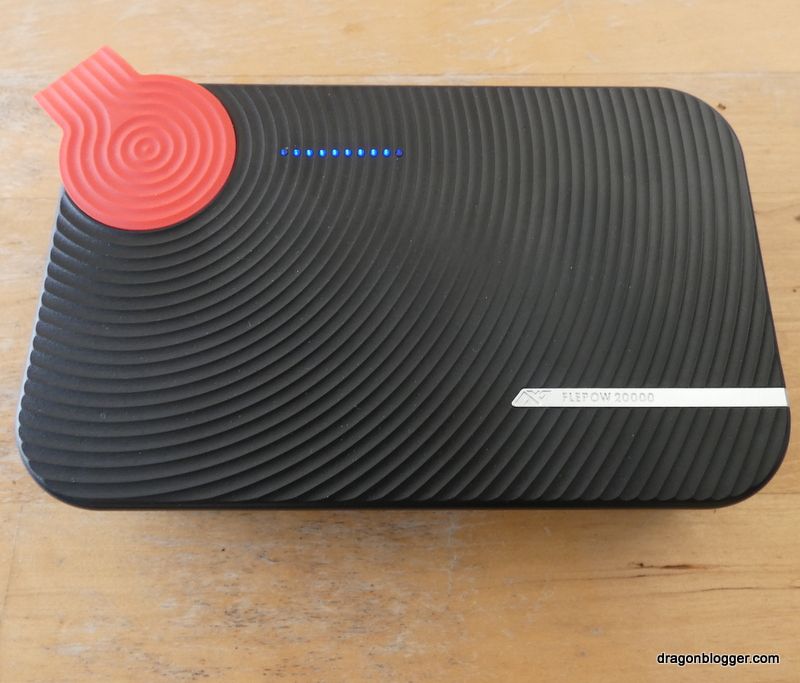 The plastic red cover for the AC outlet helps protect dust and dirt from getting in the port while transporting but I found it to be a bit of a nuisance to pull off after putting it on.  The A/C outlet port does a great job letting you power up or charge devices that need to be plugged in and can’t be powered via USB.  Key here was laptops, chromebooks and small appliances.  I had an Acer Chromebook plugged into the A/C outlet and it would stay charged for nearly a week.  The average Chromebook has between a 3,900 and 4,100mAh battery which means the Flepower power bank can on average fully recharge your chromebook 3-4 times, if you don’t have it dead this means you typically can get at least 3-4x the battery usage time out of your chromebook.  So a Chromebook boasting 10 hours could get between 30-40+ hours of constant usage time when using the Flepower power bank as long as you weren’t draining it for charging mobile devices and sharing it’s capacity across other devices that is. 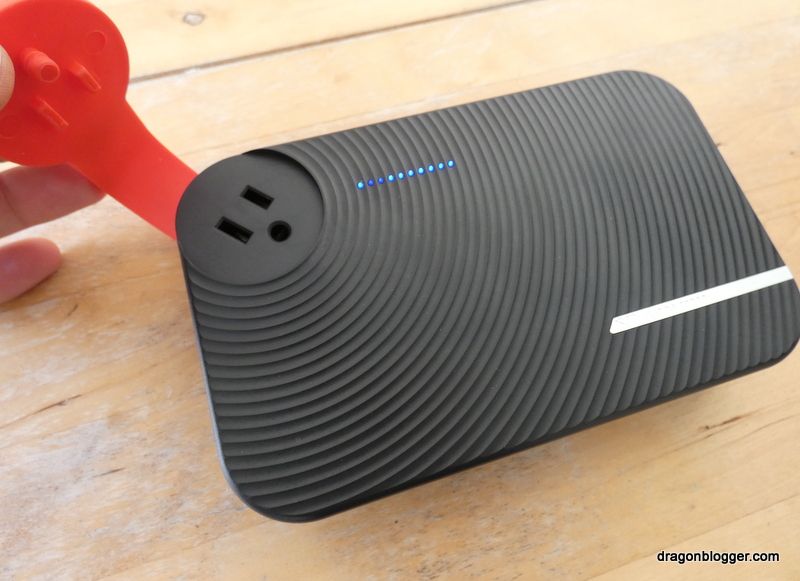 Price wise this 20,000mAh power bank with all these features was $20 cheaper than the nearest comparable brand that I reviewed previously and was a fantastic deal.  As it is a massive power bank you have to know it is heavy and not something you can carry in your pocket or purse, this is something that goes into a larger laptop bag or backpack  mean’t for carrying a bunch of travel gear for your laptop or tablets, not a slim carry bag that can only barely fit your laptop snugly.

The only thing it won’t do is super fast charge a QC compatible phone but even without QC it charges fast and is an excellent power bank to have in a very long car trip with the family, or a long 12+ hour plane flight.  The good news is this battery just makes the allowed FAA Battery Size for carry on at 100W for Lithium Ion batteries and you should be okay with using it as a carry on or packing it in your suitcase without issue.  This is also the power bank you want to take with you camping or hiking for multi-day trips where you may need to plug in an electric stove, coffee pot or any A/C appliance that you need to power up and use while you are outdoors.  This power bank could power an electric grill at a beach for example and let you grill something beach side for a party…etc .

Overall you can’t go wrong with the Flepow portable power bank and this is among the best power banks I have used at this capacity level, it just can’t be compared with smaller USB only power banks due to it’s massive capacity.  Note that it has 4, 5000mAh power banks inside of it, it isn’t one big 20,000mAh power bank.