My favourite day has come and gone. I wish everyday was a Game of thrones day.  But if you were busy and missed it here is a recap of what you missed. 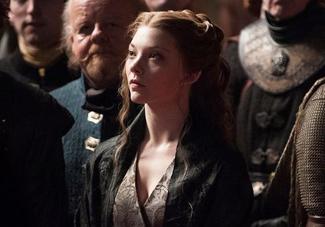 This weeks episode was more laid back then a “normal” episode.  We start in Kings Landing watching a new king being crowned.  King  Tommen, the First of His Name. While sitting in his chair he is making happy eyes across the room at Lady Margaery. Cersei sees what is happening and walks over to her. In a rare moment Cercei shows her some kindness. She asks Lady Margaery if he is still interested in being a queen.  She admits that Joffery scared her and knew he was not a good king, but that Tommen was sweet and kind and that he needed someone like her to look out for him and help him be a great king.  Margaery plays coy and agrees to help and she will speak to her father about arranging it.

Next we see Cercei having a conversation with her dad Tywin.  She discusses about having Tommen and Margaery wed after a respectable grieving time of a fortnight (that is 2 weeks), no need to be sad any longer than that I suppose.  She tells Tywin she knows what she has to do for the good of the family and also agrees she’ll marry Loras a fortnight after that. They have a chat about how they have no money left and they owe money to the Iron Bank and they will want to be paid soon and being with the Tyrell family will help financially.  Tywin also comments about Tyrion’s trial and says he will not discuss anything with her about it to keep a fair trial.  I hope he can be impartial about it. Tyrion is the only Lannister I like.

Cersei making her rounds this episode she now goes to see Oberyn Martell.  He is the only one I think would be an impartial judge for Tyrion.  They take a walk alone through the gardens. She asks of his daughters (he has 8). She talks about how having power was not enough for her to be able to save her son, just like he, who is a great fighter and prince,  could not save his sister. She asks that he take a gift to her daughter Myrcella who is in Doran. I’m wondering if there is something on the ship to smuggle over?  Or maybe so her daughter can escape?  I have a hard time trusting Cercei when she is sad. I can’t tell if she is genuine or playing on peoples emotions. 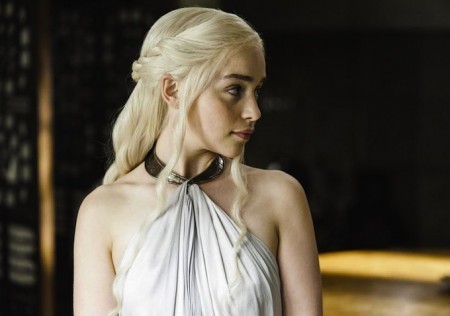 We jump across the Narrow Sea to Daenerys Targaryen who is having a meeting with entourage.  Daario Naharis tells her he has got her 93 ships for them to be able to go to Westeros.  While she is trying to decide if this is a good time to go, Jorah Mormont informs her of Joffery’s death but then also tells her that Yunkai and Astapor are back to being run by masters and the people who stayed behind are back in chains.  She decides that no queen can ever be respected if she did not stay to defend and protect those that were left behind, so Westeros will have to wait. 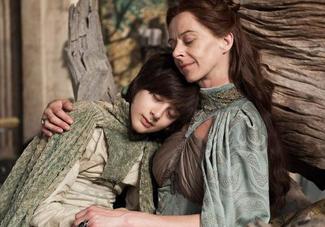 Over in the Eyrie  Littlefinger and Sansa are walking down a path through the mountains where a line of armed guards watch their every move. They arrive at the gate where Littlefinger announces his arrival of himself and his niece Elaine.  They get up to the castle where she is greeted by her aunt Lysa Arryn nad her son Robin.  After a few pleasantries Robin takes Sansa to see her room. Lysa jumps all over Littlefinger kissing him and lets slip all the things she has done for him like poison her own husband and to write a letter to Catelyn saying that the Lannisters did it. I can’t believe I didn’t see that one coming.  Lysa who can’t wait to marry Lord Baelish grabs someone to marry them and then have a very loud wedding night. After Lysa’s screamfest she goes to talk to Sansa. She asks her why Littlefinger is helping her.  Lysa seems to go from happy crazy to scary crazy squeezing Sansa’s hands while she tells of how Littlefinger loved her mother and yet she never chose him. She asks if she has had sex with Littlefinger while Sansa is just crying and denying. She then tells Sansa once Tyrion is killed after his trial ( She assumes he will I guess) that She will be free to marry Robin. 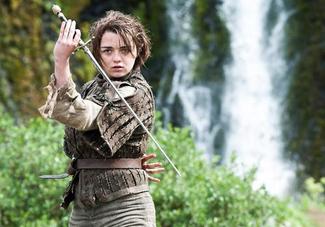 Back to where ever in the world The Hound and Arya are.  She is reciting all the names of people she wants to kill. Still names Joffery so they still don’t know he is dead.  The next morning the Hound wakes to see her not there. He looks a bit panicked and starts looking for her. He finds her by the water where she is practising her water dancing sword fighting training, taught to her by Syrio Forel in season 1. As the Hound goes near her he starts to make fun of what she is doing and explains how the Greatest Swordsman in the world taught it to her.  He laughs at her and says that if he was the greatest he would still be alive. He gets her to show him how it could kill and she takes her stance  does a couple of moves then tries to stab him in the belly.  He smacks her across the face knocking her to the ground and says  to her that fighting dirty, armour, and a “big fucking sword” can sometimes be more powerful than fancy footwork.

On their way to the wall Pod and  Brienne are travelling by horse. Well Pod is trying, he has no idea how to ride. He also burns their dinner while trying to cook as he didn’t know he needed to remove the fur from the rabbit first.  Brienne asks what does he do as a squire and starts to feel bad for him so she allows him to help her remove her armour.

Somehow the boys in black have made it to Craster’s keep in 1 day. Locke seems to have been sent up ahead to see how may they will have to fight. He sneaks in and sees Bran and his friends in a shed tied up.  He goes back and tells them that there is 11 men mostly drunk but to keep away from a shed in the back where they have hounds tied up and they might warn them of them coming.

Back in the hut Jojen is having visions of what is coming and tells Bran that no matter what he has to make it to the magic tree. He said he needs to get there for him to find the 3 eyed raven. He then gazes as his hand and we can see it is on fire.  Karl walks  in with a couple of others and they hang up Meera with plans of raping and tormenting her. Jojen yells they need to stop and that they are worth keeping alive. he can see the future. Karl finds this funny and says so you know what I am going to do to your sister then. Jojen tells him that he is going to die tonight. Just then noises arise from outside. The Nights Watch have started their attack.

While the fight is going on Locke sneaks off to the shed where Bran is.  He cuts Bran’s leg ( I guess to make sure he is a cripple). He tells Bran to be quiet or he will kill all his friends. As he is being carried out he wargs into Hodor. Hordor then rips his chains out of the wall and chases after Locke (Bran is still controlling him) and he kills Locke.  Bran is about to yell for Jon who he can see fighting but Jojen steps in to tell him no. He will not let you continue on your journey. Bran agrees and stays quiet. Hodor looks at his hands covered in blood looking sad at what just happened.

Jon finds Karl who has 2 knives in his hands. They start to battle.  Karl is mocking Jon on fighting with honour and that he will never win that way.  It seems he may just about to take out Jon Snow when all of a sudden Karl is stabbed from behind. One of Craster’s daughter wives. He turns around to move toward her and she falls to the ground. Just as he is about to stab her a sword has gone through the back of his head and out his mouth. He falls almost hitting the poor woman.

They start counting all the dead bodies. They count 4 dead Nightswatch and 10 rebels. They realize Rast is missing, he has taken off into the woods. But Ghost soon finds him and now there are 11 dead rebels.  Ghost is then reunited with Jon Snow. I still don’t know where summer is, I thought he was hurt last episode. They ask Craster’s women what they want to do. They can take them back and find them jobs but the women decide that they are better off on their own. Guess they have had enough of men for now but they decide that they want to burn down Craster’s keep, and the episode ends watching it burn. No idea what the Nightwatch will do to keep warm beyond the wall now.