Its my Favorite day of the week again. Game of Thrones night. Please note if you missed this episode below is a detailed recap that will contain spoilers.  Also please note that next week Game of Thrones will not be on (insert heart breaking).

This week we start off in Tyrion’s cell. Jamie has come to visit him.  Jamie starts in at him for yelling at everyone and how he had a deal to save him. Tyrion admits to falling in love with Shea and that he could not listen to her lies about him. he also shared how glad he felt being able to tell everyone how he really feels about them.  They start to discuss who he can get to fight for him in his trial by combat.  He starts to mention that even with 1 hand Jamie can fight for him but Jamie has to admit he is not strong enough to even beat a stable boy at this point.  He asks Jamie if he can find Bronn for him. He fought once for him already and won.  Jamie also reveals who will be fighting for the other side.  The infamous Ser Gregor Clegane, also known as the Mountain. 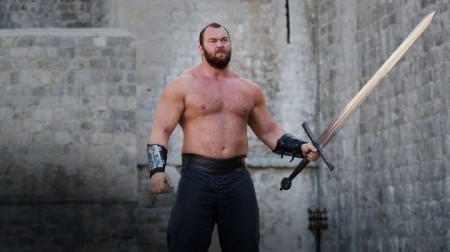 We start to watch The Mountain practicing on some poor prisoners. He is smashing them to pieces one by one.  Cercei heads over to speak to him, casually stepping over the guts that has fallen out of one of the men.  She welcomes him back to King’s Landing and thanks him for getting there so quickly. They don’t know yet who he will have to fight but The mountain is not worried.  I will say he is big and tall but his face does not look mean at all. He looks like a cuddly teddy bear.

Somewhere on The Vale we arrive to see The Hound and Arya speaking with a farmer who had been stabbed in the belly. The have a brief conversation about what nothing is. The Hound gives him a drink of water then ends his pain with a knife to the heart.  As he gets up he is jumped from behind by The Biter. We last seen him accompanying Jaqen H’ghar in Harrenhal. He bites down with his  sharpened teeth into the Hound’s neck, but the Hound knocks him off, and breaks the his neck.  There was another man standing back as well. Someone else the Harrenhal days. The Hound ask Arya if he is on her little list. She says no only cause she does not know his name. The hound asks him his name and he replies with Rorge.  She immediately stabs him through the heart with Needle. And like a proud father the Hound compliments her handy work and says she is learning fast.

We now  join Jon back at the wall as he has just got back from Craster’s Keep.  As the men start to give him a warm home coming Ser Alliser Thorne walks in to kill the mood.  They then have a meeting about what will need to be done to defend the wall against the wildlings.  Jon stands to suggest they flood the opening and tells of the giants they have and how they can not defend against their 100,000 men. Ser Alliser Thorne belittles Jon and says basically that he knows nothing and gets First Builder Othell Yarwyck to back his decision. Then punishes Jon with night duty on the wall until the next full moon. 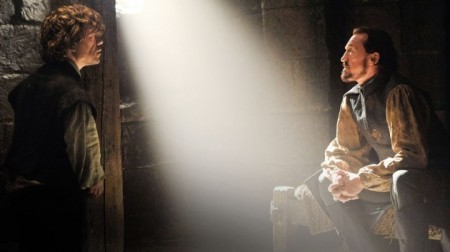 Bak in Tyrion’s cell, Bronn has finally come to visit him.  It has been a couple of days since he had Jamie go ask him to come visit him.  He walks in with his fancy new clothes. It appears that Cercei has bought his sellsword with money and the offerings to marry Lollys Stokeworth.  Bronn explains his decision to Tyrion.  You can see he does not think he can beat the mountain.  If Tryion could make a better offer to make the possibility of dying worth it then maybe he could change his mind, but Tryion has nothing of substance to offer.  Bronn finishes their conversation stating how much he does like Tyrion and wishes things were different.  You can see the sadness in Tryion’s eyes but he does understand.

We now jump across the sea to Meereen.  Daario Naharis sneaks into Dany’s room with some flowers fir her that he got from across the river.  She seems less than impressed. He says he is there for a favour. He explains he is only good at 2 things, war and women but that in Meereen patrolling the streets is not meant for him and that there is only 1 woman he wants but that she does not want him back. He asks if he can send him to Yunkai to fight for her.  Dany offers him he can do as he likes but first asked him to get naked.

The next morning Jorah walks in for a meeting with a disapproving look and tone of what has happened with her and Daario.  She tells Jorah that she has sent Daario to retake Yunkai and slay all the Masters. Jorah pleads to  her to use restraint, as a model to the others in the city who have only known brutality.  That if some like Ned Stark had not shown some compassion that he himself would not be standing here now.  Daenerys is swayed and tells him to go Tell Darrio there is a change of plans. She also decides that Hizdahr zo Loraq will accompany Daario to Yunkai, and they will attempt to use persuasion on the Masters of Yunkai. But if they will not change to live in her new world they can die in their world.

Queen Selyse visits Melisandre in her room.  She finds the her naked having a bath.  Melisandre relaxes and attempts to share joke with the queen who is very uptight, with little success. The red priestess explains her array of potions that are on a shelf beside her bath and the nature of their deceptions.  Selyse is concerned about Shireen coming with them when they depart, due to her lack of faith in R’hllor.  Melisandre and Selyse stare into the flames and they must see something in them that make them believe Shireen must come with them on their journey.

A quick back jump to The Vale we see the Hound trying to sew back his wound he got from the Biter. Arya tells him he needs to burn off the ends or they could become infected. The Hound quickly jumps and says no fire.  he tells the sad tale of how his brother accused him of stealing his toy as a child and that he didnt steal it, he was just playing with it.  How the Mountain held his face over the fire and how is father did nothing to help him but only protect his brother.  Arya feeling bad for him and understanding his fears offers to at least help him clean the wound properly. 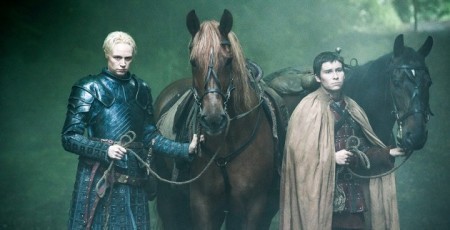 Brienne and Pod have been travelling for a while and have decided to stop at an inn for a hot meal and a proper bed for sleep.  They encounter a chatty employee you will remember as Arya’s pal, Hot Pie. Brienne asks him if he’s seen a girl matching Sansa’s description. Hot Pie recognizes the name Stark, but gets up looking a bit nervous and tries to keep the conversation about food.  Brienne tries to reassure him, by telling Hot Pie she pledged herself to Catelyn, but he leaves in a hurry.

Pod looking a bit worried tells Brienne that openly mentioning Sansa Stark may be a mistake, given the current situation. As they are getting ready to leave Hot Pie comes up behind them  and tells them about Arya.  He explains that he last seen her  with a man they realize must be the Hound. He presents them with a piece of wolf bread to give to Arya when they find her. He has improved his skill a lot since the last one he made for her.  Pod explains to Brienne  that the Vale is where the Stark children could be as they have an aunt there. Unsure if they should change course, they decide that they will now head to the Vale. 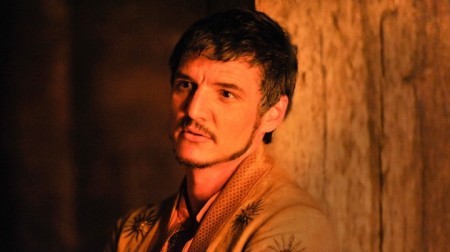 Tyrion receives a third visitor in his cell, Oberyn Martell. They have a small conversation about monsters and disappointment and then  tells the story of how  he first met baby Tyrion. He tells the tale of how he heard about a monster baby with a big head and claws. When he first arrived at Casterly Rock he couldn’t wait to see this monster. And after a few nights Cercei and Jamie finally took him to the nursery where Tyrion had laid. He pulled back the curtain only to see a baby with a slightly larger head and small baby arms but there was no monster. And Cercei had grapped his baby penis pinching it so hard that he thought she would rip it off until Jamie had stopped her. It beomes clear that Cersei really has hated Tyrion his entire life.

Oberyn then reveals his true purpose for the visit. He has came to King’s Landing for justice for his sister Elia and her children. Tyrion laughs and says he has come to the wrong place for justice but then  Oberyn tells him that he will be Tyrion’s champion against Ser Gregor Clegane. This has made me so happy and excited. 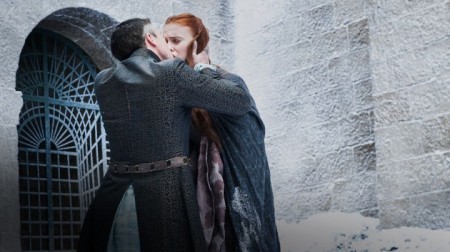 In the Eyrie up at the castle, snow has fallen and we see Sansa having a moment as she is playing in the snow and building her Winterfell Castle or what she can remember of it. Robin comes out and asks questions like did they have a moon door. After a couple of minutes of happy conversation Robin asks to help and Sansa says ok, but first thing Robin did was destroy one of her buildings. They have a small heated yelling match and then Sansa smacks robin across the face and he runs off like a baby.  Littlefinger comes walking down the stairs having seen what happened and tells her not to worry. They have a chat about why he really killed Joffery and he shared with her that when someone you love is killed you do what you can to get back at them and shares how he has only ever loved her mother.  After complimenting Sansa on how much prettier she is that her mother was he lays a big kiss on her. But standing in the walk way above is Lysa who sees them kissing.

Sansa was summoned to the main chamber of the Eyrie.  She finds her aunt Lysa standing by the Moon Door. Lysa starts talking about how he doesn’t know the exact hight of the fall but how devastating the effect of the fall on bodies.

Lysatells Sansa she knows what she did. Sansa begins to apologise for hitting Robin but Lysa cuts her off and tells her its about kissing Petyr. She drags Sansa to the edge of the moon door. Lysa is heartbroken and screaming at her niece, with her holding Sansa’s head over the Moon Door. Littlefinger arrives in the nick of time and demands his wife let Sansa go and that he will get rid of her.  Lysa breaks down sobbing, and throws Sansa back from the edge. 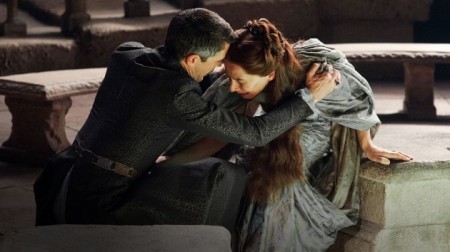 Littlefinger takes her into his arms and comforts Lysa, telling her, “I have only loved one woman. Only one my entire life.” and then he whispers in her ear  “Your sister.” And with that, he shoves her through the Moon Door, to her death.

Thanks for reading my recap. Let me know what was your Favorite part.