I can’t believe we are already at episode 9. The time moves to quickly for this show. This recap will probably seem shorter than usual as this episode only focuses on The Wall and all the other story lines will have to wait until next weeks finale.  Remember this is a recap so this post will contain spoilers.

We start the episode with Jon and Sam on top of the wall during their night duty.  Sam is trying to have a very awkward conversation about what it is like to be with a woman.  He confesses that he and Gilly have never had sex and he wants to know what it was like to love someone and have them love you back in case they die soon, Jon’s story will be the closest thing to ever being loved before they all die.

We see the wildlings around a  campfire.  Tormund starts to tell a story of having sex with a bear. Ygritte keeps jumping in and is annoyed with the story as she has heard it a million times before. She is making arrows, Styr the Magnar taunts her about still having feelings for Jon Snow. She jumps up and gets in his face, and vows that she will be the one to kill him. As the camera pans away you can see someone at the top of the hill staring at them and they take off.

Maester Aemon has a talk with Sam in the library at Castle Black.   Aemon observes that neither Jon nor Sam listened when he told them that “Love is the death of duty.” Aemon says that he was in love once, when he was still Aemon Targaryen. “Nothing makes the past a sweeter place to visit than the prospect of imminent death,” he sighs cheerfully. I wonder if the love he is talking about is Olenna Tyrell. Remember I have not read the books.

Sam goes outside and hears Gilly crying by the gate. He demands that Pyp let them in. Pyp listened to him Sam used a curse word when yelling at him and said he has never heard him swear before.  I realize that it was Gilly that had seen the Wildlings on the hill. The horn on the top of the wall is now being blown.

Ygritte, Tormund and the rest of their band begin to run at Castle Black. With the sound of the horn they know it is time for the attack to begin.

Jon races to the edge of the Wall and sees that the forest has been lit on fire. Alliser Thorne watches as the men load barrels of oil to the edge of the Wall.  He admits to Jon that they should have sealed the tunnel. Thorne says this is not the end and that  he and Jon will definitely continue to hate each other past this night.

Sam hides Gilly in Castle Black, for what looks like a meat closet.  He tries to leave but she wants him to stay. He explains that they are his brothers and he has to help them. He promises her that he will not die and will come back. So now I am expecting him to die because after all this is Game of Thrones.  As he is about to leave he first grabs Gilly and kisses her. At least he gets a kiss before dying right? 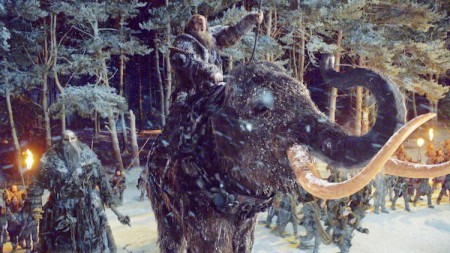 The Wildling army approaches the Wall from the north. You can clearly see the giants and mammoths. From the south, Ygritte and the other Wildlings attack the Night’s Watchmen and begin to storm Castle Black.

Alliser Thorne  commands at the top of the Wall to Janos Slynt, who has news that wildlings are approaching from the south.  Thorne gives the men in courtyard a rousing speech. “When the sun rises, I promise you, Castle Black will stand!”

On the Wall, Slynt continues to insist there are no such things as giants even though you can clearly see that the giants are right in front of the wall. His scared attitude is just causing problems so Grenn tells him he is needed below and Slynt gladly leaves.  Jon Snow takes control of the Wall.

The Wildlings from the North have begun to climb the Wall. The Nightswatch are trying to defend using arrows lit with fire, but the giants also have arrows that are massive and they begin to fire back.

Down below Olly, the boyd who’s dad was killed by Ygritte and then the Thenns ate his village, watches as the Thenns and Ygritte invade Castle Black. They have made it into the castle courtyard.  Janos Slynt runs off and hides. He runs into a locked room where he  finds Gilly hiding as well.

Jon, Grenn, and Dolorous Edd start dropping barrels on the Wildlings attacking from the North. One giants dismounts from his mammoth and hooks the tunnel gate to a chain and the other end to the mammoth and start to try to rip down the gate.

Jon fights his way down to the courtyard to help out at the gate. Tormund and the Thenns are making killing everyone in their path. There was a really nice continuous shot following Tormund running and killing.  We get to see Ghost as well attacking and killing feasting on the Thenns.

Styr the Magnar heads for Jon and the two begin to battle. Ygritte hears the swords and knows it is Jon and makes a run over to get him, killing his brothers all the way. Jon drops his sword, and Styr starts to beat him until Jon grabs a hammer and smashes him in the head. Jon turns and sees Ygritte who is pointing an arrow at him. Jon almost smiles at her and they stand frozen in a private moment that is shattered when Olly shoots her in the back. Jon holds Ygritte. She tells him they should have never left that cave. He tells her they can go back and she says “You know nothing, Jon Snow,” before she dies in his arms.

Jon  approaches Tormund who is filled with arrows but still standing and fighting. When Jon orders him chained, Tormund says “I should have thrown you from the top of the Wall, boy!” Jon says sadly. “You should have.” The Wildlings head away from the wall at least for the day.

Sam goes back to Gilly ( I can’t believe he is still alive after everything). She has done some damage to Janos Slynt, which he probably deserved even more.

In the morning, Jon and Sam discuss damage to Castle Black.  Jon says that Mance ( who I have no idea why he wasn’t shown at all this episode) has a hundred thousand more Wildlings,  giants, and mammoths. Jon tells Sam he is going out to find Mance and kill him. If the Wildlings lose their leader then maybe the rest will back off to where they came from. Sam thinks this is a horrible plan, but Jon makes it clear that they have no other options.

As Jon and Sam walk through tunnel to the gate, they find the corpse of the giant, surrounded by Grenn and his men.  Jon tells Sam to have the bodies burned. Jon hands Sam his sword Longclaw, so he will not lose it again. As the gate rises, Sam looks at Jon telling him to make sure he comes back.

Well I guess like Jon,  I know nothing as this recap is just as long as the others I have done. When I started I did not think there would be so much to write. Stay tuned for another post later this week of getting ready for the finale party as well as the recap of the finale episode that will be up next Monday. Let me know what you though of last night’s episode.