Having had the PlayStation 4 for one week now and having played through quite a few online PSN network download games, a few Free to Play games and Battlefield 4 and Call of Duty: Ghosts, I feel I can finally share some feedback and first impressions with confidence on what I think of the PS4 so far and what is needed in the near future. 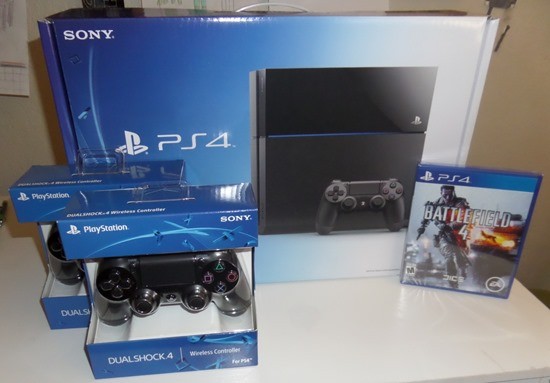 First off I will say that PC Gamers will hate the consoles all they want and compare how awesome and superior computers are with state of the art graphics cards and whatnot, but most of us live on a budget.  And if you have $400 to spend, you will not find any device more powerful or capable graphically than the PlayStation 4 for gaming in my opinion.  It takes a PC with graphics card that is at least 2x to 3x this cost to equal equivalent graphics quality maybe you can get close with a Steam OS and omit the cost of the Windows OS built into the cost of the PC but you still can’t match the price/performance ratio of the PS4.  This is single handedly why consoles still sell millions of copies, the fact is most people don’t have the budget for $1000+ gaming PC’s so have to rely on consoles to fill the need for not having a PC capable of playing the latest and greatest in gaming.

PlayStation 4 does have an incredibly slim and nicely designed controller, I personally love the feel of it compared to the Xbox 360 controller, slim, neat but the lack of a start button and “options” button instead with Playstation button at bottom was a little confusing.  Now the touch sensitive button at top and center is cool and adds function but it does not compare to the capability of a Wii U tablet controller.  So Nintendo really did have a nice controller here in my opinion that should have been showcased more.  Drawing squares, circles in Trine 2 with the PS4 touch sensitive button was fun and it was responsive, but the small size doesn’t make drawing shapes on it as easy to do as a larger touch screen controller.

Trine 2 is awesome on the PS4 and is local co-op.

There is a distinct lack of games still, considering it hasn’t even been a year yet this isn’t a surprise but there needs to be more games coming out quicker.  Sony needs to up the deals with getting more Free to Play games on the PS4.  Warframe is great, but why is Loadout not on the PS4 yet as well?  DC Universe online is also fun but what about Marvel Heroes and so many others?  There needs to be more F2P games online that are on the PS4 as soon as possible as well as more indie content demo’s.

There is still a distinct lack of local co-op games for the PlayStation 4 and Xbox One as well, so if you want a PS4 and enjoy couch co-op with another player your options are limited.  Call of Duty: Ghosts and Trine 2 support, as do a handful of indie titles, but not much.  Plants vs. Zombies Garden Warfare will come to PS4 in August and will offer local co-op too so this will help.  Battlefield 4 does not support any sort of co-op play so if you have a local player and you both want to play online together and split screen, CoD: Ghosts is the better option.

There are a ton of fun games to play from the PlayStation Network however, and the 2 free games per month from being a subscriber makes it well worth it.  In June Trine 2 was one of the free games for PSN Subscribers and this was one of the most fun games I have played in a while.

Meanwhile another indie game bought was King Oddball which is very fun to take turns with other players and should appeal to anyone who likes playing Angry Birds.

Resogun on the PS4 was the first game that really astounded, this game is very similar to Defender back on Atari days but is just incredible in the amount of details, pixels and scope of the 3 dimensional world you fly around in.

Stick it to the Man was another free game for PlayStation Network Subscribers and is quite fun, it is a story/puzzle based game where the main character is Woody Allen-esque in mannerisms and you have to solve peoples problems while dealing with this alien in your head that gives you a hand extending from your brain that only your character can see and control.  The cartoony style is fun and watching yourself get printed repeatedly when you die is also entertaining.

One of my favorite features of the PS4 is the built in game recorder, simply double tapping the share button and recording starts.  This allows you to also record your voice with plugging a headset into your PS4 controller.  This allows you to create your own gameplay videos and you simply tap share and save or upload when you finish with your recording.  The PS4 does give you trim tools but honestly I would rather just export them to SD Card and do my editing/branding with Camtasia studio as the trim tools are a bit limited and clunky to use on a PS4 controller.  Still the capture feature is such a great built in feature for anyone who loves doing gamecasting.

Using your PS4 to watch Netflix, Hulu or Amazon is done with ease and I like the format and interface for those applications.  We now watch Netflix on PS4 instead of the Wii U gamepad because it is so much faster to load up than the Wii-U and the format is better and seems to always pick 1080p streaming more on PS4 than Wii U when streaming Netflix.

Finally ,the fact that you can put your PS4 into sleep mode and it will continue to download updates while sleeping so all your game patches and downloads happen without you having to wait and waste time is awesome.  Combine this with the fact that you can browse the PSN network from any internet device like the PSN iOS app and select/download demos or purchase games and they will download to your PS4 right as you order them from your mobile device, so that they are there and waiting for you when you get home to use your PlayStation 4.

All in all the PlayStation 4 is a huge hit my house, and the only complaint we have is that there isn’t enough local co-op games that split screen yet for it, or enough new titles.  Destiny is probably the most anticipated new game for the PlayStation 4 in my house because if it’s co-op design built around it.  Last but not least I have 3 PS4 controllers, and I wish it had 4 or 6 USB ports as compared to only 2, the Xbox 360 had a plethora of ports and that would be my only thing I wish it had more of, since if I get a Skylanders Portal it will tie up one of the USB ports and I can’t charge 2 controllers at the same time anymore, plus I have to constantly rotate the controllers on the charging.