It took less than 2 days for the GameStick which is an Android based console that merges the controller and console into the same device to be fully funded. 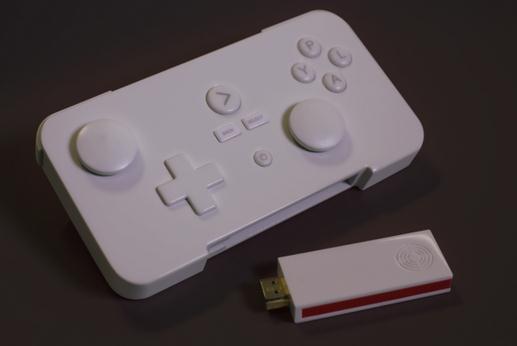 GameStick is also now announcing XBMC and DLNA support for the device.  The GameStick which looks like a standard 2 analog stick controller that you would find on a Wii, Xbox 360 or PlayStation 3 actually houses Android Jelly Bean.  The device has a USB dongle attachment that plus into the HDMI port of your TV and transmits the video while providing the connection to the controller which houses the brains of the entire unit.

They are also claiming support for up to 4 linked units, presumably the same dongle allow multiple controllers to connect to it and sync for local Co-Op play as well.

Obviously the GameStick competes with the Ouya and other Android based gaming console concepts that are flooding the market to develop in time to capture what is anticipated to be a massive audience who wants to play their Android games or newly developed Android games on a big TV instead of their little smart phone or tablet.

While I don’t see these devices replacing or even decreasing the mobile gaming market of Android and iOS devices, I do see it potentially bringing in more casual gamers who haven’t wanted to buy a full Xbox 360 or PlayStation 3 console and want something less expensive and more casual that already plays many of the games they already know.

Granted, there are only a handful of games that support an analog controller instead of touch screen, but I do believe the market will grow considerably.  Eventually I see bluetooth gamesticks that will connect with tablets so that users can use a gamestick with the tablet which only makes Android devices become more like the PS Vita in my opinion.  I have a friend who opted over getting the PS Vita instead of an Android Tablet because gaming was at the forefront and the controller which console gamers know and love so much was a requirement.

I do believe there is a market for the GameStick and I believe that games will be developed for Android that will be designed for this type of controller interface.  It is ironic because it fundamentally is going backwards from the touch screen concept and standard interface of Android.  I do not think that the hardware power of the GameStick will make it compete against the likes of the current or next generation gaming consoles.  Though if the next generation of Xbox and PlayStation 3 cost more than $400 for the consoles this will give all but the serious gamers pause and consider a cheaper alternative.

Personally the idea of the controller housing the brains is a good one, it allows you to simply bring your device with you, all games, profiles everything and connect anywhere to any TV.  You can instantly play in Hotel rooms, friends houses and anywhere that has an HDMI input.  This will only serve to continue to expand gaming as a major source of entertainment for the masses which is a good thing in my opinion.

There is no doubt when GameStick is finally released for purchase I may purchase one, or give one away to readers.  Maybe I can get one to do some reviews, one thing I think should be built into the GameStick right away is the ability to screenshots / captures of your gameplay with some button combo so you can instantly share online, possibly combine this with some video capture if it is capable.

Oh, since the GameStick can put out 1080p video and my thinking is you can get Hulu+ or Netflix app to it it may even directly compete against Roku or other Internet Streaming devices too!

What do you think of the GameStick?