It was Jarret over at High Health Media who first mentioned to me that I might be able to improve my AdSense earnings by using Google DFP or DoubleClick for Publishers to squeeze higher CPC and CPM rates from my AdSense ads.  I spent a lot of time trying to learn Google DFP which is a complicated system for those who aren’t familiar with some of the advertising terminology and the interface is nothing like Google AdSense or Analytics which only further delayed my ability to figure the system out.

Still I figured it out enough to replace my top horizontal 468×60 banner on DragonBlogger.com posts with a DFP ad block with AdSense enabled, what this means is that I set a certain CPM dollar amount and in theory an AdSense ad will display if it meets or exceeds the CPM price you have set.  If the AdSense sponsor doesn’t meet or exceed then your default “creative” or “advertisement” is displayed instead. 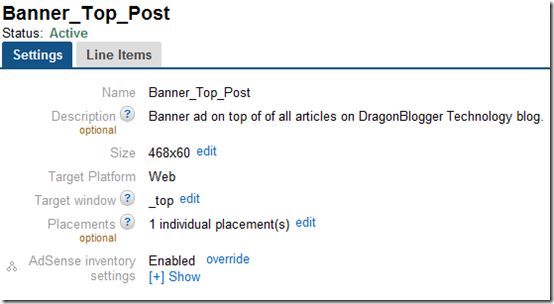 At least this is how I thought to understand it, in my testing I created an order for a Amazon Affiliate product and manually setup the creative which is just another word for the “banner image” you intend to use for the order.  Right now Google DFP is still too complicated for me to fully understand enough to write an effective post to tell others on how to use it, also since installing Google DFP around 2 weeks ago my CPC and CPM rates for the Banner ad are virtually the same as prior to using Google DFP at all.  Even worse my creative default ad which had 1,500 impressions only received 2 clicks since being in for 2 weeks which isn’t a very good click through rate.

I will be experimenting further and when I fully compare, I will start to convert other banner ads to Google DFP and start increasing or tweaking CPM rates to see if I can reach an price that will drive my AdSense earnings higher.  Heck, in theory you could make more from affiliate sales so by having an affiliate product as your default creative and using that with AdSense only if matching or exceeding CPM you could earn money both ways.

Remember that Google DoubleClick for Publishers does not actually list or sell your ad spaces for you and provides no means for an advertiser to purchase a banner, you must clearly list your ad spaces for sale and either set an order that lists that banner ad slot is for sale, or you need to have some other way to showcase that the ad space is for sale.  Listing your website in Google Ad Planner is one such option for making sure your advertisement slots are listed and can be found by advertisers using the Google adplanner system.    Here you set what your CPM is that you display for advertisers, and Google itself will include the average # of impressions per day, keywords related to your site…etc.

The Google DFP has potential in that you don’t have to have wasted ad slots that just say “buy here” and that your ad slots can serve as both AdSense banners when they exceed your set CPM rate and you can sell much more flexible options for banner ads.

With Google DFP you can sell a specific # of impressions, # of clicks, or even unlimited impressions for specific date range.  It is however far more complicated than just setting up a BuySellAds or AdvertiseSpace banner and my testing involves around trying to maximize AdSense earnings or alternate between affiliate banner ads and AdSense ad banners in the same slot.  I will let my fellow bloggers know if I am able to stumble on some formula or derive some way to increase earnings or gain new earnings from Google DFP but for now I am still in the experimentation phase.