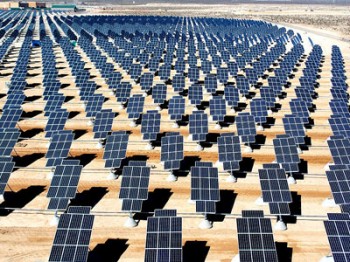 Hey there.  Are we finally entering into the world of solar power?  For over a decade, there have been talks of reducing fossil fuels and going the way of electricity and solar energy to power our daily lives.  Even though you may sporadically see an electric car or solar panels on a house, it’s still not mainstream.  Even with all the government incentives to urge residents to conserve energy or use alternate forms of energy, we still haven’t really gotten on the alternative energy boat.  Well, that may soon change.  Internet giant Google and buyout specialists Kohlberg Kravis Roberts & Co., have teamed up to purchase 4 photovoltaic power plants in California from Recurrent Energy (A subsidiary of Sharp).

Although Google has now invested in over $900 Million in renewable energy, the plan with KKR will have the most impact.  Projects are planned to power the Sacramento Municipal District through the use of solar power plants.  By generating approx. 88 megawatts at peak hours, the four solar power plants will test the infrastructure of whether or not a district or city could be powered by renewable energy!  The first of these projects is set to come to fruition sometime in 2012 and it will be exciting to see how well it will do.

We’ve all come to see how most everything that Google touches, turns to gold (with the exceptions of Google Buzz, Google Friend Connect, and other minor hiccups) so for them to continue to push renewable energy as opposed to coal produced energy is a bold move.  Bold because it goes against the grain.  Bold because oil companies still has a firm grasp over the energy industry.  It takes a giant to start a movement and Google is as giant as they come.  Later!