My experience with laptop cooling mats has not often been pleasant. I’ve bought several at my local electronics store and I tend to be disappointed with them. So when I was offered the chance to review the HAVIT HV-F2062 Laptop Cooler I was coming in with pretty low expectations. My gaming laptop overheats very easily, and the cooling mats I bought in the past never really cut the mustard. So they send it over, I open the box, and I plug everything up, the fans start spinning, and I turn on a high draw game. Three hours later my laptop was showing no signs of overheating and I was more satisfied with this cooling mat than the four I had bought previously. So let’s break down what makes this such a satisfying product.

This doesn’t seem like such a big deal, but it is. Quite a few of the other cooling mat brands I’ve purchased in the past had one or two adjustable angles. They were usually weird angles and made gaming difficult for me. It wouldn’t be as big a deal to me if I could just leave the mat closed, but in some of the manuals it is specifically stated that if the cooling mats are not opened to allow airflow, they won’t work as well. This means that the more angles you have, the better, and while those chumps had a set angle (which hurt my hands to use for a long time) HAVIT gives you options. 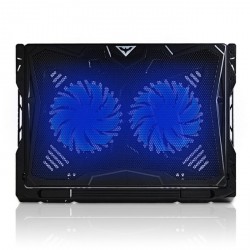 Look into my eyes…

This one is a bit more obvious. See my laptop can really get heated when I get a high draw game, or start compiling a video. This means I need serious cooling power. The mats I’ve bought in the past have always had a very poor design. The fans were covered by a solid wall of plastic with vents here and there. I understand the idea, you want to compress the airflow to certain areas to guarantee that the airflow is more powerful. I’m sorry, but that is a poor idea and you could all learn from the HV-F2062. HAVIT gave their cooling mat an open mesh design. This means that the airflow is uniform over the entire area of the laptop, cooling it more efficiently and therefore doing a better job of being a cooling mat!

Item 3- The settings and USB port

So when you buy a cooling mat, you are dedicating one of your USB ports to cooling mat limbo. You will be unable to use it for anything. HAVIT again saw opportunity. When you plug up your laptop to the HV-F2062 you have an extra port on the side to use. Not only that, but you can also adjust the fan RPMs. I’m not sure what else to say about this bit. It’s just really good design. 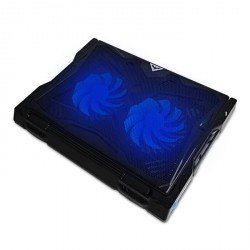 The fact is that this is just a good product. I love it. It’s got tabs to keep it from tipping over when you have it at an angle. It’s lightweight while still being solidly built. It’s LED lit so the fans just look really freaking cool. I love it. I want two. I want to put them facing each other so that they can cool each other down, making each other more efficient in and endless loop until the earth itself freezes under the sheer cooling power of these incredible devices.

Or maybe I’ll just use it the way it was intended. This is the first cooling mat that I can actually use…so I’ll probably just do that.