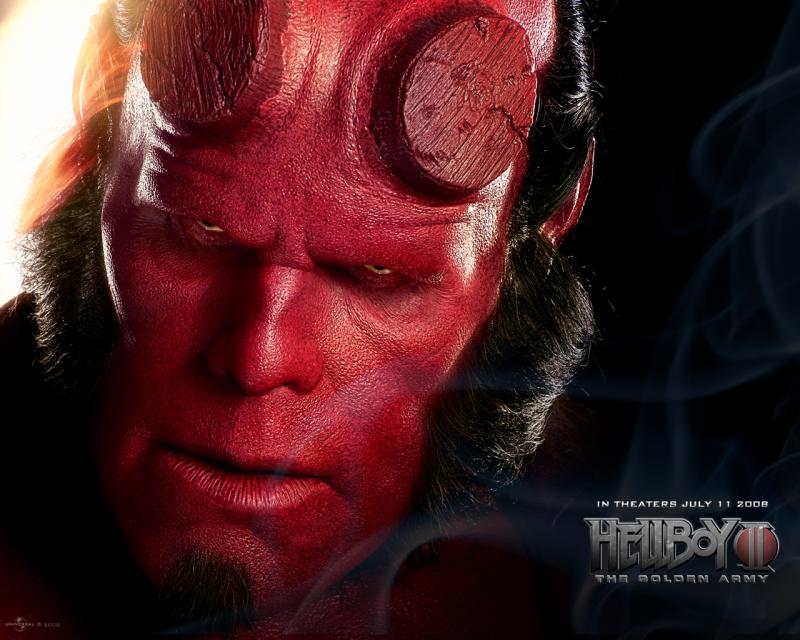 First off I have to tell you I am a big fan of Ron Perlman and his portrayal of Hellboy from the first film, and a huge fan of Guillermo del Toro the director.Â  I loved Pan’s Labyrinth and this movies creatures and set designs remind me of his previous film in many ways.

This movie has it all and starts off fantastic with a flashback to Hellboy’s early childhood years where his father reads him a story about the war between elves, goblins and humans and how the elves had used a golden army of seventy times seventy indestructible mechanical soldiers to beat the humans back.Â  The elven king regretted the bloodshed and forged a pact of peace and vowed never to use the golden army again.Â  I have always loved the human aspect of Hellboy, he is a lover of cats, beer and has a complex where he desperately wants everyone to like him and he also likes to show off.

This humanizing aspect is what makes his character so great and the movie itself so great, and Hellboys character in many ways reminds me of Mel Gibsons character in the Lethal Weapon movies.Â  Brash, cocky and full of his own personality and insecurities that you really get into the character and feel for him.

I have to say I think Luke Goss did a fantastic job as prince Nuada, and portrays the emotion and conviction of a being who has felt wronged for centuries, I wasn’t necessarily for saving the humans in this film.Â  I thought they did a good job showing how Hellboy kept seeking approval from humans but even after saving a baby and trying to help people derided and feared him which hurts his feelings.

I also liked the new boss of the Paranormal research Johan Krauss at first he seems cocky and uncaring, but you learn a lot behind his story and how he feel’s.Â  His ectoplasmic form are are a really cool feature and he is of particular benefit in some of the final scenes in the movie.

Selma Blair had a much larger part in the second film and had more scenes and was more vocal, I did enjoy her finally showing her feelings for Hellboy and her reasons for brooding and being moody were explained in the film but my favorite part of her scene was when she was saving Hellboy’s life and pleaded with Death.

Speaking of that scene, the way Death was portrayed in the film was magnificent.Â  The makeup, artistry and disturbingly eerie appearance and personality was addicting to watch.Â  I literally hung on every word studied every facial feature and was very impressed.

Action packed almost from beginning to end the movie has a few scenes in between that really show the heart of the movie, most notably when Hellboy convinces Abe to have a few beer’s and talk about love and romance, and the two of them are singing together.Â  As mentioned the fact that Hellboy is human inside just with a different appearance and abilities is what makes this film so engaging.

In Summary I loved the film even more than the first one and am hoping that there will be a third in the future.