Frankly, I just wanna voice my opinion on Blizzard, and their awful loot system, so please bear with me as I take you on the not so complex summary of the horrid grind of the Azerite Lottery.

The residuum price is unfair, in the sense that if you can modestly pump-out ten to fourteen keys you’re looking at around four hundred and seventy azerite to not gamble. This is fine, but you’re looking at thirty or so weeks to get all three, then you hardly spend any time enjoying them before the expansion is old content.

I don’t care about taking such a long time to earn stuff, but I DO care about the four thousand seven hundred and fifty residuum shortcut that yields one in seven odds to get your best in slot, and three in seven for an item that’s only half as effective. Some people may take this as me whining that I couldn’t get the required gear to raid the waking city, but surprise, I put up with this torture without resorting to gambling away my hard-earned residuum. I wasn’t having a bunch of vendor trash standing in the way of me raiding, nooooo sir.

My gripe is that it’s neither a fun nor fair system for earning your gear, frankly whoever invented this consistent system of loot boxes should be put in stocks, and beat to death with an oar. This may sound harsh, but keep in mind that children play games with these systems in place, and when you look at the system you realize something. This is just a slot machine. “Why am I wasting my life pumping money into this game, this foul machine that only punishes me for rewarding it” you’re likely asking yourself right about now dear reader. The answer is all too clear, even to a flashing lights and nice sound addict like myself.

THEY’RE ALL GEARED TO DO THIS. You’re already playing an MMO that is effectively considered cookie clicker, they’re toying with your dopamine receptors in the same way mobile apps do, only with a far more insidious goal. WASTING EVEN MORE OF YOUR TIME TO KEEP YOU PLAYING, AND MAKE THAT FIFTEEN DOLLARS A MONTH FEEL WORTH IT.

Faff, and the world faffs with you, a wise internet reviewer once said. That’s all recent world of warcraft expansions are, faffing simulators, and frankly it hurts me to see. The Azerite lottery means either showing up to raids in gear you didn’t earn, or missing thousands of baseline DPS compared to others, just by luck, not skill or effort.

Then you have the mythic loot system. Running mythic plus dungeons can be tough in some spots, as there’s so much junk on every drop table that the chances of you getting your best in slot are effectively dropped even further than dealing with the lottery system. Corruptions are another useless lottery system, dressed up as a “choice” when it isn’t really.

Gone are the days of plannable gear paths. I’d take Mists of Pandaria’s reforging system over this mess. At least back then you could adjust gear stats into slightly better pieces, that were somewhat usable. It gave the player some control over their horrid luck, not to mention made the good rolls feel like you worked for them. Frankly if Blizzard continues with this system into Shadowlands I might truly lose faith in their ability to treat modern World of Warcraft as a respectable IP. 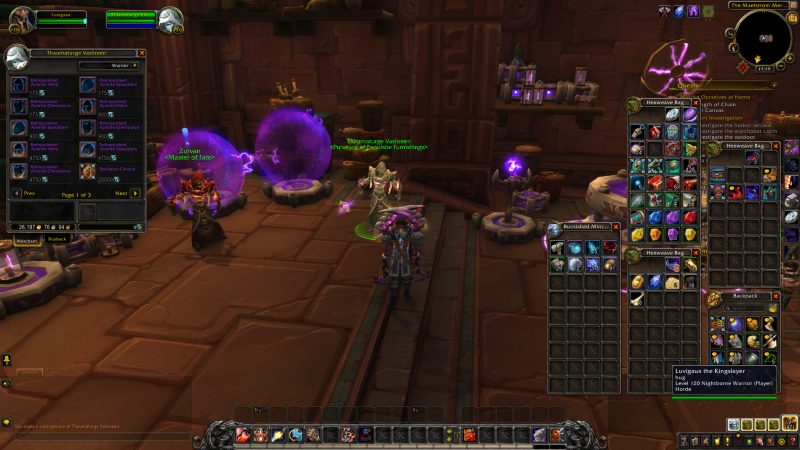 We like to grind for things that make us feel good Blizzard, not useless garbage that we’re going to shill for two copper, and CERTAINLY NOT USING SOME ABSOLUTE NONSENSE OF A LOTTERY SYSTEM WHEN THE LOOT TABLE IS ALREADY TERRIBLE AS IT IS. Why do you not understand that? The fun of vanilla WoW was working for that next level, getting that next piece of loot that made your grind that much easier, walking six hundred miles to purchase your next spell, and enjoying how cathartic it felt when you used it. In short, take two thirds off the crap loot table, azerite traits included, and stop trying to turn us into gambling addicts Blizzard. You’ve already done enough damage.  I mean we already see that lotteries are incorporating many of the engaging features of games but video games themselves like what Blizzard has done is not incorporating a lottery very well.