Sometimes you just want to know what is going on in your home in the most covert way possible.  This is why spy cameras and hidden cameras are becoming every increasingly more common, flexible and creative in how they are designed to be obscure and less detectable than your typical cloud home security camera.  Now, obviously someone can use hidden cameras for disreputable purposes but let’s assume that you would be interested in a hidden camera for your home to help protect your property, or monitor a shared living environment where you suspect a roommate or Airbnb situation may necessitate some detective work.

Here are a list of a few home hidden cameras that you can use to spy…I mean monitor certain rooms and locations indoors.  I am also curious to know if you are someone who uses hidden cameras in your house or are interested in using them because I like to know purposes, benefits and if it helped solve a problem for you by capturing something happening on a hidden camera which gave you the proof you needed to take action on something. 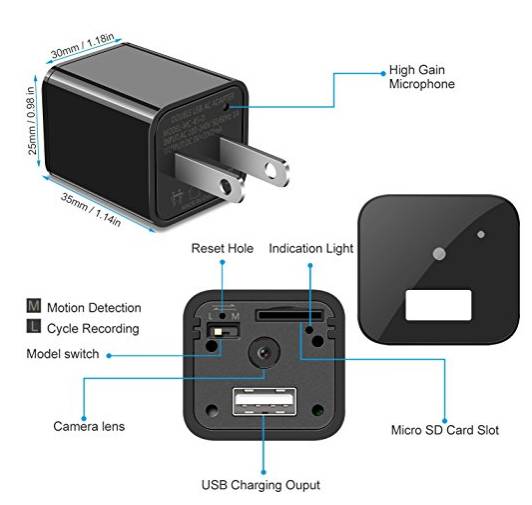 So this combines the benefits of a USB Wall Charger with a hidden camera and most people would gloss over the small lens thinking it was related to the LED charging light.  Due to the fact that this hidden camera is a wall charger this probably would be more useful in outlets that are high off the floor like kitchen counter outlets, but if you are trying to find out who keeps unplugging or searching for something under your bed or something perhaps you can use it to monitor a couch, underneath a bed or other area depending on the angle and location of the wall outlet that you plug this hidden camera plus wall charger into.  This is also the ideal spy cam for pets as it is low to the ground and designed more to capture things at floor level.  This mini spy camera records in 1080p at 30 frames per second and supports a 32GB MicroSD Card which is included.   You connect the camera to a PC to configure it and it records the movies in AVI format which you can transfer to your PC via the USB cable to the device, or take out the MicroSD card and transfer directly.  Some have said this spy camera charger is also good to take to hotel rooms and use it to monitor your stuff while you leave to make sure things aren’t stolen or someone isn’t messing with your items while you are out of the room. 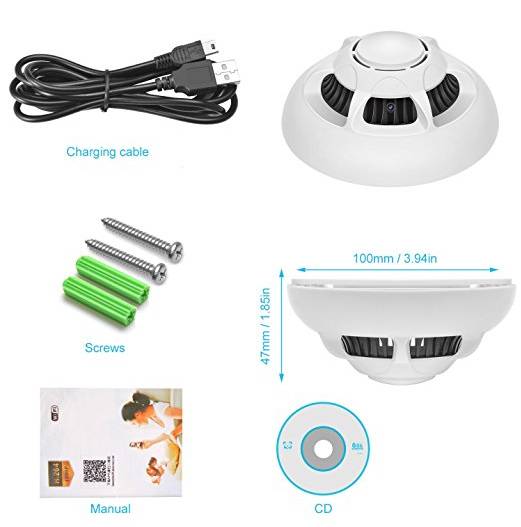 How about surveillance from your ceiling?  This is a Smoke Detector with hidden camera built in that connects via Wi-Fi and supports up to 128GB SD Card.  It supports live viewing and recording and can make an ideal way to monitor an entire room from above.  This hidden camera smoke detector supports several video formats including 1080P, 720p, 640P and has motion sensing and 4x digital zoom.  It can also send notifications and alerts directly to your phone if it detects movement which makes it a good system for monitoring an empty room or house right as a front door or back door would open.  This has a wider range of capture and is also great for seeing what rambunctious pets may be doing in your house while you are gone as well.  Some have mentioned that it doesn’t look enough like an regular smoke detector and has a glowing light which may give it away, but if you have higher ceilings this may not be an issue as most people don’t default to looking up.  So a hidden camera smoke detector may be just the thing to keep tabs on what is going on in your house. 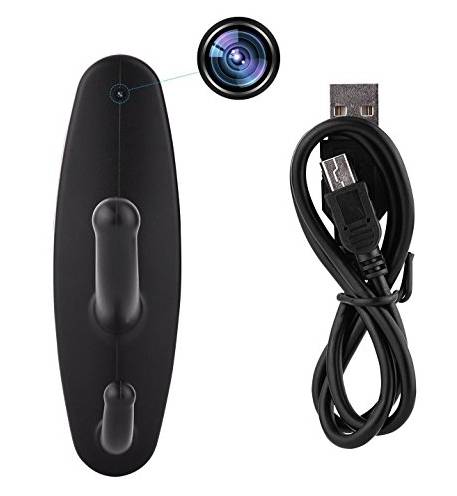 This hidden camera clothes hook is a real functioning clothes hook and has an on/off switch on the back plate and takes 1280p video.  It does only support up to 16GB MicroSD which isn’t included, and it does have to be taken off and charged between uses.  It is recommended to charge the battery at least 12 hours for the first three times you use the device and it records video in AVI format.  This could be good as a coat rack or jacket rack near an entry/exit door, or maybe a hat hook in a bedroom.  Possibly even a laundry room as well.  It is recommended you place the spy camera clothes hook in a brightly lit room. 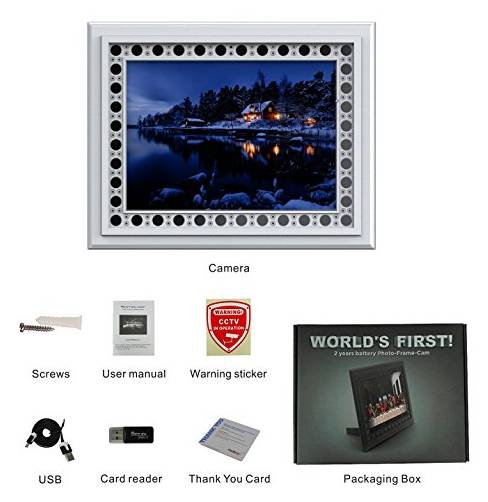 Okay so one of the best and most discretely hidden home spy camera devices is this photo frame spy camera from Conbrov, the fact that it is a photo and has these circle designs at the edge make the camera lens on the right virtually undetectable.  Surround it by other similar frames and nobody will know that you are surveying your living room or bedroom to make sure the babysitter is behaving and properly taking care of your kids.  This camera has motion detection and night vision but does not have any Wi-Fi or Internet connection so it can’t do real time alerts or alarms, this makes it more of a device that records for you to review the footage later than to security monitor and be alerted in real time.   But the most interesting feature of this photo frame spy camera is the fact that it has a built-in 1000mAh battery capacity and the brand advertises that this nanny cam has up to 2 years stand by time, when using PIR motion activated mode.  It also can record 30 days of footage and 10 hours of night vision footage as well.  This is a good monitoring system to leave running at a house while you are out of town but you won’t be able to receive any notices.