SAN FRANCISCO, Feb. 3, 2015 /PRNewswire/ — The 15th Annual Game Developers Choice Awards (GDCAs), the premier peer-based awards celebrating game development, will be honoring Hironobu Sakaguchi, the creator of the bestselling Final Fantasy series of games and the founder and president of Mistwalker, with the Lifetime Achievement Award for his contributions to the world of gaming. The Game Developers Choice Awards ceremony takes place on Wednesday, March 4 at 6:30 pm at the Moscone Convention Center during the 2015 Game Developers Conference® (GDC) in San Francisco, and will be streamed online and open to all GDC pass holders.

At Square Company, Ltd. (now Square Enix), Sakaguchi served as Director of Planning and Development and created Final Fantasy, a groundbreaking role-playing game (RPG) that has since gone on to spawn 13 sequels, numerous spinoffs, films and TV series. The famously prolific series was titled “Final Fantasy” as a reference to Sakaguchi’s plan to leave game development, should the title prove unsuccessful, a plan he ultimately decided to scuttle. In his tenure at Square, he also helped produce a plethora of iconic titles, including Vagrant Story,Parasite Eve, Kingdom Hearts and many others. In 2004, Sakaguchi founded the development house Mistwalker, where he helped with the creation of Blue Dragon, Lost Odyssey, The Last Story and Terra Battle. Since its initial release in 1987, the Final Fantasy video game series has sold more than 110 million units worldwide and has received seven Guinness World Records.

“Over his illustrious and thriving career, Sakaguchi-san has established some of the most successful entertainment franchises of all time, and helped cement the RPG genre in Japan and around the world. But the gaming world owes an even greater debt to Sakaguchi-san and team for making a compelling game narrative as important to game development as its graphics and sound,” said Meggan Scavio, General Manager of all GDC events. “Final Fantasy helped pave the way for game stories that dealt with death, regret and character development in a mature and significant way, and we’re proud to honor Sakaguchi-san as a true leader in the space, and an inspired game developer.” 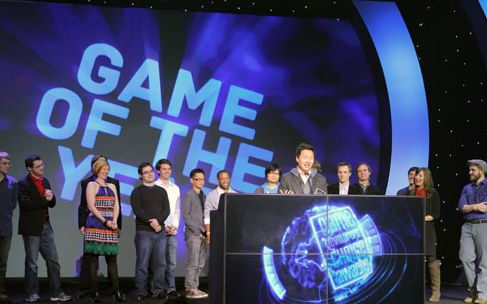 The Game Developers Choice and IGF Awards are also excited to reveal the hosts for this year’s award ceremonies. Returning as host for the Choice Awards is Tim Schafer, noted game creator and founder of Double Fine Productions. Tim Schafer has previously hosted the Choice Awards in 2007, 2009, 2011 and 2013. In addition, Capybara Games president and co-founder Nathan Vella (Superbrothers: Sword & Sworcery EP, Super TIME Force, Below) is returning as the host of the Independent Games Festival Awards after his successful hosting stint in 2014.

Prior to founding Double Fine, Tim spent a number of years at LucasArts where he was responsible for several award-winning adventure games, including Full Throttle and Grim Fandango, also co-designing Day of the Tentacle, and working on the seminal The Secret of Monkey Island 1 & 2. At Double Fine, he has helped produce such acclaimed titles as Psychonauts, Brutal Legends, Broken Age and Once Upon a Monster.

The show will be held immediately following the Independent Games Festival Awards, and for the fifth consecutive year, those not attending GDC can watch both sets of awards shows live online via GameSpot.com and Twitch.tv.