The Hobbit, an Unexpected Journey, released Friday to theaters nationwide.  Many of the showtimes were sold out, including the ones late Friday night (and probably Saturday as well).  As the latest film from Peter Jackson, and the first in the newest J.R.R. Tolkien trilogy, it is not a surprise this was the case. 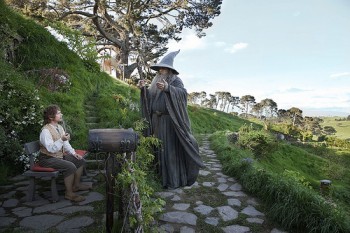 Jackson released the film in every available format out there for the theaters; 2D, 3D, IMAX 3D, and others which most people don’t normally see anymore.  This gave him, and the fans, a chance to see an Unexpected Journey any way they wanted.  I saw it in IMAX 3D, which was truly incredible (one of the best things was watching the first 10 minutes of the next Star Trek film which only the IMAX viewers were privileged to get.).

I liked how the film began with the history of the dwarves and how they came to be homeless.  I didn’t like that they wouldn’t show Smaug at all; just a shadow on the ground and fire as he destroyed everything.  I thought it was interesting to note the things that are named differently in the time of Lord of the Rings and how that really does happen in the real world.  I also thought it was nice to see Bilbo and Frodo speaking of the party that begins in Fellowship of the Ring, along with the sign on the gate and Frodo heading off to wait for Gandalf.  Despite the fact that it wasn’t necessary to add any of that, it was a nice reminder that this is not a single entity story (even though it is a stand-alone novel) and life does go on. 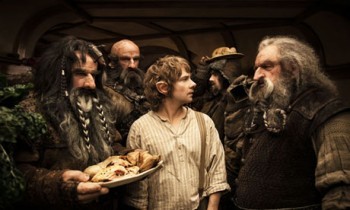 Once we get into the tale of what led to Bilbo joining this odd group of dwarves, who are all so different including how they look, I have to say I was enthralled.  The beginning did drag some, but I think all epic stories are like that; whether it is on the screen or on the page.  There definitely were some allusion to the first Rings book with Gandalf hitting his head on the hanging chandelier and making Bilbo’s Hobbit-hole dark as he tells the dwarves that he stands by what he said about Bilbo being a thief.

The journey of this group of 15 isn’t much different than  the one in Rings, except that what they are doing is not quite so world changing nor is it a combined effort of all the races in Middle Earth.  However, it is life changing for Bilbo.  Gandalf does warn him that if Bilbo comes home, on that there is no guarantee (although we know he does or there would be no tale), he will never be the same.  This could be foreshadowing of the One Ring falling into Bilbo’s hands but who knows. 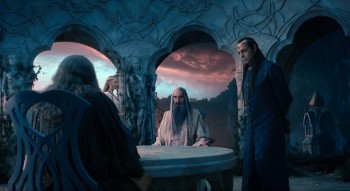 The graphics were amazing but there was a lot of the film where it was obvious they were CG.  The movement was so fast that much was blurry but the still or slower moving shots were just as beautiful as the Rings trilogy.  Seeing some of the characters we know from the first trilogy again showed that the world goes on, which I liked.  There was some mixing though as the Brown Wizard was explained in the film but we actually “meet” him in Fellowship.  While the beginning was slow, the middle to end was extremely fast paced and it seemed every few minutes we watched the small band get out of one danger only to be placed in another.

Like any adapted film, there were severe changes.  Some who know the books well will not be pleased.  I always remember that watching a film based off a book should be viewed with a grain of salt.  There will be changes and you won’t like them no matter what.

I will say that if you are a purist, don’t go see The Hobbit an Unexpected Journey, you will not enjoy it.  If you realize that it is designed to be an action film with outstanding visuals, well then you should at least enjoy it enough to warrant spending the money on it.  For me, I can’t wait until 2013 when the next one is released.