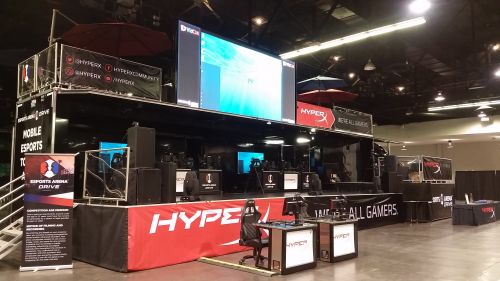 What:  HyperX is teaming up with Esports Arena Drive, an 18-wheel, 35-ton semi-trailer that unfolds into a state-of-the-art mobile arena that features a competition stage.  A VIP lounge gives fans an opportunity to go on stage and game like a pro.

When:  Comic-Con runs Thursday, July 19 through Sunday, July 22, 2018 and the mobile esports arena is open for fans and players to test their gaming skills using HyperX gear as follows:

Where: Just outside the San Diego Convention Center, at the Park at the Park Whiffle Ball Field, Petco Park in downtown San Diego.

Why:   Comic-Con attendees and fans are encouraged to stop by the mobile battle rig to test their gaming skills using the latest HyperX gaming accessories on stage at the fully-loaded Esports Arena Drive. Conference attendees and journalists are encouraged to visit for prime game time and to learn more about HyperX and the company’s long-time support of the esports community.

HyperX is the gaming division of Kingston Technology Company, Inc., the world’s largest independent memory manufacturer, with the goal of providing gamers, PC builders, and power users with high-performance components. For 15 years, the HyperX mission has been to develop gaming products for gamers – high-speed memory, solid state drives, headsets, keyboards, mice, USB flash drives, and mouse pads – to the gaming community and beyond. The award-winning HyperX brand has carved its name atop the leaderboard by consistently delivering products that deliver superior comfort, aesthetics, performance, and reliability. HyperX gear is the choice of pro gamers, tech enthusiasts, and overclockers worldwide because it meets the most stringent product specifications and is built with best-in-class components. HyperX has shipped over 5 million headsets worldwide.

Join the global #HyperXFamily at facebook.com/hyperxcommunity, and learn how HyperX products can enhance your console experience and boost performance for both you and your PC at hyperxgaming.com. Whatever your skill level, whatever genres you play, we embrace all gaming enthusiasts everywhere with our core belief — We’re All Gamers.