In a lab and test tube IBM researchers have developed a nanoparticle that can target and destroy antibiotic resistant bacteria which could eventually lead to a method to reduce infections and kill bacteria that is becoming increasingly resistant to antibiotics like MRSA. 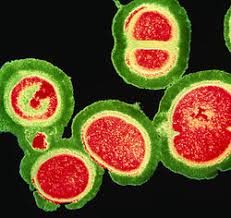 These nanoparticles which are 70,000 times smaller than the thickness of a human hair basically attracted to these bacteria and only destroy these type of bacteria without harming any of the surrounding cells.

Literally, this could be a breakthrough in modern medicine and it will be scheduled for animal testing and possibly human trials if no side effects or negative impacts are discerned.  Imagine the future potential this could have as nanoparticles can be developed to target specific infections or even cancer cells without harming surrounding cell tissue.  This could lead to all sorts of therapies and treatments and may actually user in a new age of “medicine” that doesn’t use chemicals to treat but more like specific targeting and destruction of unhealthy cells or bacteria.

Obviously causes for concern would be what happens to the nanoparticles after they complete their goal of destroying the infection?  Do they forever flow in the blood stream attaching or eventually get dissolved, excreted, or lodged in cell tissue at some point and build up?

Still, this technology has potential and especially with bacteria becoming more resistant to methods of treatment.  With new strains of Tuberculosis, Pneumonia and MRSA of course becoming harder and harder to treat effectively science and technology have to come up with a solution that prevents any chance of “resistance” from being developed.

Could 100 years from now people just be injected with nanoparticles that constantly flow through the blood stream acting like robotic immune system cells that can target and destroy any infection, detect and destroy cancer cells as they develop and before they can become larger tumors?  It makes you wonder just what the future of medicine will be in the coming decades.