There is something about roller coasters that clouds my judgment and draws me closer to an unnamed fear, each time I find myself in an amusement park. It is only when the doors close behind me and the vehicle begins its ascendance that reason returns and countless questions rush into my mind…but by that time it is already too late. With Roller Coaster Rampage I can go a step further and not only ride insane roller coasters but also design some crazy rides, without worrying about safety. 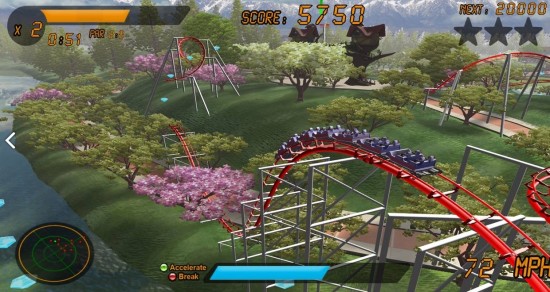 Without the inherent limitations that result from placing the emphasis on safety, you can afford to create the most ambitious designs. The tracks are being built behind you in real time and the combinations you can create are virtually endless, so no matter what you have on your mind you can translate your idea into reality. All this freedom would be in vain if the laws of physics wouldn’t apply, but fortunately Roller Coaster Rampage found the perfect balance between imagination and reality.

Collecting gems is just one of the ways of earning the needed points, so you need to think about the most effective track designs that will set your roller coaster into the right direction. Speed is the most important selling point of roller coasters, but while there is an overwhelming temptation to increase it as much as possible, excessive speed will lead to derails. In the early stages, these incidents will not have a deterring effect on your desire to build increasingly bold tracks, but eventually the mishaps will take their toll. 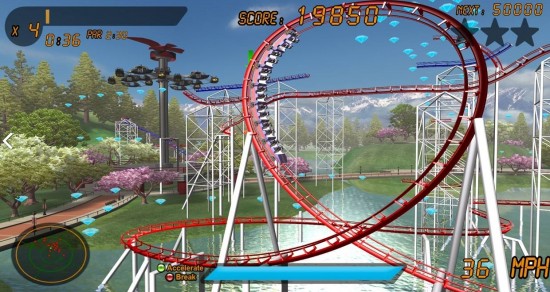 All the effort of building the ultimate roller coaster would be for nothing if you wouldn’t have the chance of putting your creation to the test. Roller Coaster Rampage won’t deny you this opportunity, because every time you feel like going for a ride, you can jump right in and get your adrenaline fix. The developers still need to make controlling the roller coaster easier and more intuitive, because as it is, the few keys meant to keep it on track are not responsive enough.

Speed needs to be adjusted very often and if you fail, or react too slowly, derailments are almost inevitable. Especially for those who are trying to beat a high score and see their own names at the top of the leaderboard, these incidents will generate frustration. Overall I like what Pantera Entertainment did with Roller Coaster Rampage and until I get the chance to ride the real thing again, I’ll settle for this simulator. I will rate it three stars out of five, due to some cumbersome controls and shallow content.