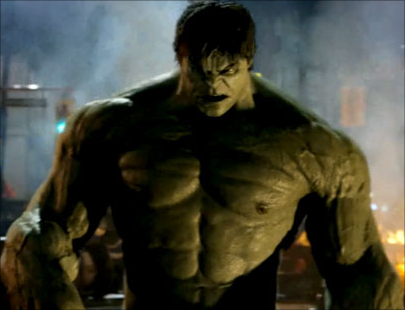 I must say it was a very good movie, much better than “Hulk” from a few years back.Â  Edward Norton does a very good job as Bruce Banner, and William Hurt plays General Ross.Â  This movie basically ignores the previous movie and treats it as if it never existed.Â  Now I did like some aspects of the previous film, such as the fact that Hulk became random sizes based on the strength of his rage transformation. This was true to the original comics, which Hulk became much more “same size” in the later comics.

During the opening credits the movie eludes to how Bruce Banner becomes the Hulk, through a series of experiments he gamma radiates himself and rages as the hulk injuring his girl Betty Ross (played by Liv Tyler) and just about everyone else at the lab and testing facility.Â  He is on the run, but he is also seeking for a way to cure himself of his affliction.

Hiding out in Brazil working at a soda bottling plant he manages to keep low for several years while working with a doctor from New York on ways to undo Gamma Radiation Poison.Â  He tries a rare herb extracting and amplifying the dosage, but alas it doesn’t have an effect.Â  Meanwhile during an accident at work a drop of his blood made it into a soda bottle (nasty, this is like people who find mice heads in jarred pickles).Â  A cameo by Stan Lee himself as the one who drinks the bottle and has an attack, this clues the Government into Bruce Banner’s location and they send in a strike force team to immobilize and capture him.Â  Tim Roth I must say plays some of the most wicked and sociopathic villains, his role in “Planet of the Apes” was the best role in the film and he does play just as evil and cunning a villain in this movie as well.

The apprehension fails and Bruce gets enraged and goes all Mutant on the soldiers, tossing them around like rag dolls, throwing heavy machinery and I love how they emphasize he isn’t bullet proof.Â  The bullets carve holes in his green skin, he just regenerates so fast they do no damage.Â  So he feels pain from being shot which only enrages him further.

Bruce then realizes he has to go back to the states and collect more data about his transformation and the project and this causes him to meet up with the love of his life Betty, who was trying to move on with her life but fell immediately for Banner the moment she laid eyes on him again.Â  Ah, I do love stories about True Love, somewhat of a sucker for these type of romantic scenario’s.Â  I also like the cameo by Lou Ferigno as the Security Guard at the University.

Meanwhile, Major Blonsky (Tim Roth) realizes he needs to be enhanced to catch The Hulk, so he asks the General to test the serum on himself.Â  He takes a low dosage at first which makes him faster, stronger and more agile.Â  When they next catch Bruce at the University, they unwisely engage him with guns (pointless) and then Major Blonsky has at him.Â  He is fast, but Hulk is too strong and he is unable to overcome that point.Â  These sonic weapons are brought out which temporarily incapacitate the hulk but after seeing some soldiers manhandle his girl, he is able to overcome the sonic weapons and destroy them.Â  The Major goads him into attacking him and The Hulk just literally kicks him so hard his body shatters against a tree.Â  You figure he’s dead, and in fact at the hospital the medics say his bones are pretty much crumbled like dust.Â  The Hulk escapes but not before he saves Betty’s life from an attack ordered by her Father (General Ross) who did not realize his daughter would be caught in the line of fire.Â  Hulk saves her and carries her away to safety.

However the serum did grant him regenerative powers and he asks the General for more dosage to fight Hulk again.Â  Meanwhile Bruce made it to the City to meet his mystery scientist awaits Bruce and Betty and they try to induce a “Hulk Attack” to try and neutralize it with an antidote.Â  This seems to work and Bruce reverts back into his human form and they believe that he may be cured.Â  Meanwhile the General is all hocked up on his 2nd dosage of juice and decides to rough everyone up.Â  After learning that the Scientist had cloned Bruce’s blood he demands to be enhanced just like “Hulk”.

Of course this is where the Major mutates into this distrubing looking cross between “The Hulk” and some sort of Exo-Skeletal creature.Â  Makes for a pretty interesting creature that goes around smashing, killing and goading the army.Â  Bruce who was being carried away under capture offers to assist and asks to be sent back in.Â  The General realizing he has no choice lets Bruce jump out of the helecopter where he falls through the ground and arises fully transformed.

One of the best battle sequences commences, equal I would say to Iron Man final battle here.Â  As we see The Hulk is out muscled but still retains some of Bruce Banner’s wit.Â  The thing I liked was the fact that even as The Hulk, Betty was able to stop him and have him show mercy to the monsterous Major, releasing him without killing him.Â  (They don’t explain how they subdued that monster though and keep him from escaping).

The best scene by far in the movie is when General Ross is sitting at the bar at the very end and is drinking shots, when Robert Downey Jr. shows up as Tony Stark.Â  He says that “They” are putting a team together and they should talk.

This is a setup for The Avengers movie, and I am so DAMN Excited to see this one coming.Â  Really cool to have Robert Downey do that cameo.

Influencer / Reviewers / Live Streamers - Get in Touch https://t.co/ed4q6Q2aZM
16 Ways Merch Stores like Shopping Dragons Can Save You Time and Money https://t.co/J2rsJTyBqI - 18 hours ago