While on my trip to Europe I knew I had to purchase a few iPad 2 games to keep myself entertained for the over 13 hours of combined flights. After playing the free demo of Medieval HD on the iPad a few weeks prior I decided it was worth purchasing the full game which was only $2.99 at the time and provided about 10 hours of entertainment. 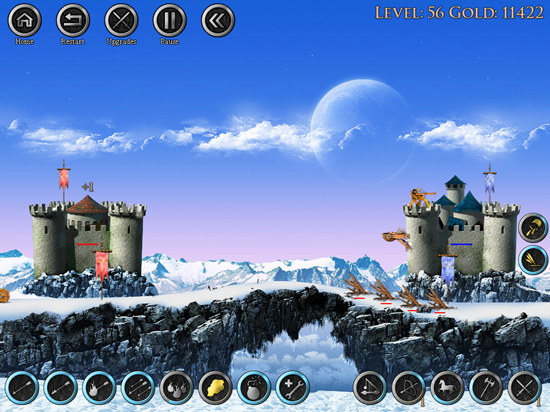 Medieval HD is a type of Castle defense game that combines some elements of Angry Birds in the fact that you have a ballista mounted on a castle and use your thumb to drag and shoot arrows, boulders, bombs at knights, axe men and even against flying blimps and hot air balloons that all attempt to assault your castle or capture your flag.

In addition to simply using finger drag/fire repetition you have the ability to purchase four types of barracks which add soldiers to your arsenal which include archers, swordsmen, axe men and catapults. There are three types of victory conditions for each level which include either capturing the opponents flag which gives you the most gold, destroying the enemies castle or killing all waves of units that descent upon your own castle. 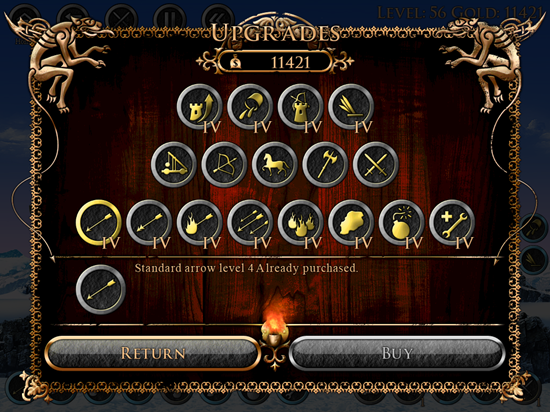 There are also a variety of weapons you can purchase and upgrade each to level 4, this increases refresh speed, damage and in some cases duration. I particularly like the flexibility early on in the game and you can choose to focus on producing legions of units to confront enemy forces or simply upgrade your ballista and assault them manually from the top of your castle.

The game however does lose a little of it’s allure when you run out of upgrades and by the time I upgraded every option to level 4 around Level 35 or so, I was starting to get a little bored. The variety in levels and unique unit types ends at around the 30th level so I trudged on until Level 50+ and at this point there is no challenge anymore on normal as the same units in varying patterns keep attacking my castle and it grew a bit duller.

That being said the game is very fun and I enjoyed it immensely for the first 25 levels, only on a few levels did I lose and have to restart the level. If the game forced you to start over at level 1 each time this could have made the game last longer, but it would have been more frustrating. Instead if you lose you can simply replay the level you lost on.

If you enjoy castle defense games with an added drag and fire gameplay, then you will definitely find Medieval HD is worth the $2.99 investment. This equates to about ten cents an hour gameplay and you can even play the first 10 levels of so with the free version of the game first.