Leapfrog introduces the LeapBand in August which will feature an interactive pet and encourage children to get active and track their activity. The device will include 14 challenges pre-loaded and kids can choose one of eight pets. It will also come in 3 different color styles.  The LeapBand is Leapfrog literally taking a leap into wearable technology and trying to capture on the fitness trend of wearable tracking devices which help encourage users to measure and track their activity.  The data collected is also uploaded to a site where only parents will be able to monitor their childs activity, Leapfrog mantains they will not use or share the data with any other party or for any other purpose to comply with federal regulations around children under 13 years of age. 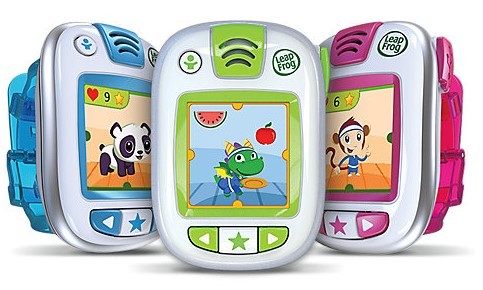 Now while I am not opposed to any fitness tracking gadgets, and the age range designed for this is between 4 and 7 I am struggling to consider whether this product will be something kids will actually enjoy for more than a few minutes.  I can see how parents may be inclined to purchase one for their kids and set reward systems for meeting daily activity goals given how many kids spend idle time watching YouTube or playing video games, watching TV these days but ultimately with some of the activities being described like  “wiggle like a worm” or “pop like popcorn” I have to wonder if there will be enough actual activity/fitness to really make a difference as far as calorie burn for children and whether or not it will truly be entertaining enough for them.

I don’t know about other parents kids, but my kids were using tablets and computer since they were 2 and playing RTS, and MMO games since they were 5.  This very “kiddish” activity and design of these apps look more for ages 3-5 than 4-7 at best from what I have read and maybe would encourage them to do more activities, but really any more than doing an interactive show or DVD, or any more benefit than a parent actually going out for a bike ride or run with their kid for 15 to 20 minutes a few times a week?

What do you think about Leapfrog’s direction and about fitness bands in general?  Even Nike announced they won’t make the Fuelband anymore after knowing Apple is releasing their smart watch soon.

Influencer / Reviewers / Live Streamers - Get in Touch https://t.co/DwhaTltp6U
Do not forget to enter for your chance to win a Gigabyte G5 GD Gaming Laptop with an RTX 3050 GPU or $800 (PayPal o… https://t.co/lEWEiLGEMS - 6 hours ago