I was having a ton of issues with making phone calls and hastily needed to find a Wireless USB Headset that I could use to make phone calls over my PC with MagicJack or Skype.  I couldn’t wait for a product to ship in a few days so I went down to my local Best Buy and purchased the Logitech Wireless H760 headset based on some reviews I read online.

The headset itself is very comfortable and is a behind the head kind which I wasn’t used to but seemed to work pretty well, I felt the ear cushions could have been a little higher quality and the microphone doesn’t have any noise cancellation apparently at all. 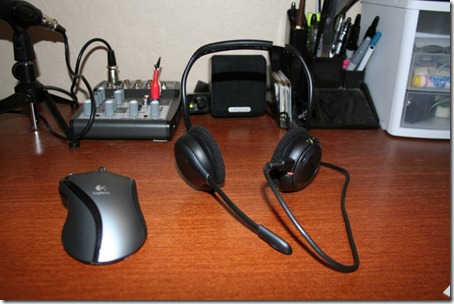 At first my call quality wasn’t very good as far as voice is concerned, my callers told me that I sounded too “unnatural” with too much background noise.  I was miffed that I had so much trouble with mic audio quality especially when just one hour earlier I dropped $100 at Best Buy locally to pick up the device.  I experimented and found a setting in the Windows 7 audio control panel however that solved my problem.

There is a communications tab here: 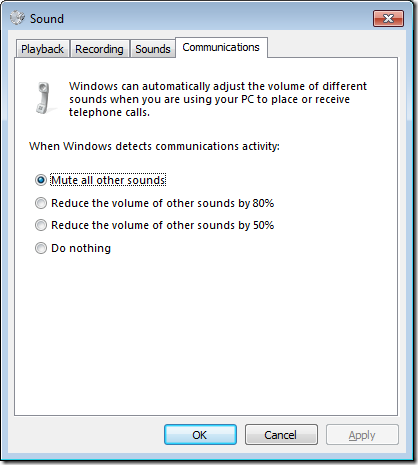 I found that when I set the “Mute all other sounds” in letting Windows adjust the volume I had much better call quality according to people I spoke to on the phone.

Now the phone functions much better and I get no complaints at all, the wireless range lets me move about 15-20′ from my PC without issue.  The USB cable to charge the headset appears to be a standard type of USB for such devices and it charges fairly quickly, though it seems to only hold onto battery for about 3 hours from what I have read (I haven’t been on a call that long with the Logitech H760 yet to determine how long battery life is).

The headset configures instantly, just plug in the USB Wireless plug and turn on the headset (after charging).  It connects and you can immediately select it as a device for your Skype, Magic Jack or any other Internet audio call service.  The headset automatically mutes when you lift the microphone piece up at an angle and I found this to be intuitive and clever.

Meanwhile the audio controls are over the right ear and you can raise or lower the volume easily.  It has play/pause and track forward/backward buttons for those who are listening to music and want to control their music program while maybe in another room listening to the headphones which is a nice feature.

Overall the headset works pretty well but for the price it should have a higher quality noise cancelling microphone and higher quality ear cushions.  Unfortunately, I was in a hurry and I didn’t have a chance to shop around and look for any coupons or discounts, but if you aren’t having to pick up a product in an emergency I suggest you find use a Best Buy promo code  to save money on any Best Buy purchases online.

Content Creator/Owner of https://t.co/kw5uyPjwWQ for Tech, Game, Entertainment and streamer at https://t.co/e072uYSy5Y
We are now Live Streaming on the Dragon Blogger Channel, come check us out and say hi and see what is streaming now! - 6 hours ago