You may have come to this article with an instant opinion about whether loot creates and by similar token micro-transactions belong in the gaming industry and whether or not your favorite games from casual ones to AAA featured titles should contain them. Should loot crates be regulated by the gaming industry and be treated more like gambling, or should they continue to fall under the video game industry with some rules or standards that apply to prevent abuse?

How Loot Crates are Different from Micro-Transactions

Loot Crates revolve around paying something and getting something random in return. It can be cosmetic only for the game, or it could have some benefit that increases your odds of performing better. Normally, there are multiple ways to earn loot crates through playing the game. You can earn credits per achievement or time played, as well as, purchase them with cash, or with the in-game currency which is normally also paid for in cash.

Loot crates can be a great incentive to reward gamers for loyalty. If used properly, rewarding players for reaching milestones and amount of time played, can be a great way to recognize players and make them feel like they earned a real achievement. The random aspect of loot crates makes it similar to gambling, because there’s a little rush involved with opening a crate. You may get something great and exciting that you really wanted to help improve your gameplay, but you also run the risk of getting junk or common stuff.  Typically, with loot crates the items you can win are categorized as common, uncommon, rare, legendary, or with similar types of descriptions to indicate the frequency of the drops, and what you can expect from them. There are also probability ratio’s associated with the “payouts” of gear or loot that work much like lotteries and slot machine games. 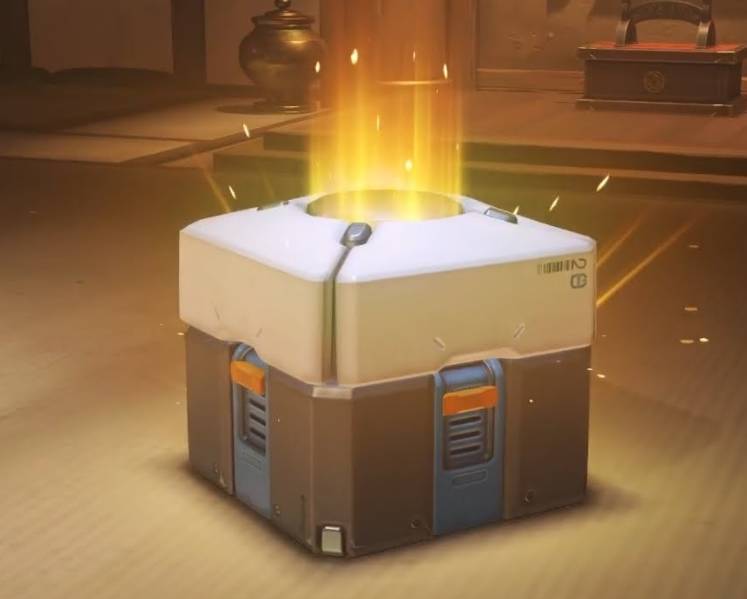 Why are Loot Boxes Bad?

Micro-transactions and loot creates stimulate the psyche similarly to how gambling does when rewards are received. A higher risk lies on kids who are prone to fall for immediate rewards, and don’t necessarily understand the concept or value of money since they just ask their parents for it. They will simply ask can I have X amount of dollars for in-game currency and purchase crates.

Loot boxes can be similar to CCG (collectible card games), except with CCG’s at least physical ones, you can sell or trade the cards you don’t want, you get a physical tangible asset that has value even if it is pennies. With digital CCG you aren’t physically owning anything and can’t do anything with it. It would be different if you can list or exchange and trade digital cards, but because you can’t they fall under loot boxes. Buying 50 packs in Hearthstone is not the same as purchasing 50 loot boxes in Overwatch. Hearthstone gives you cards to play in the game which can give you an advantage and better odds of winning, the other is purely cosmetic. Either way, loot boxes can be abused to where you feel like you aren’t getting the full content of a game as you would in the old days and instead have to keep buying or paying your way to unlock better things in order to get the best play experience. Manveer Heir, a developer from BioWare, explained how someone spent $15,000 on Mass Effect cards which is an incredible amount of money to be spent on in-game purchases.

The truth is, making games is big business and for every indie title that you see with a handful of developers making it big, there are triple A titles which cost tens if not hundreds of millions of dollars to produce and market. Marketing is extremely expensive in addition to the overhead of paying for the development of the titles. Simply making games and selling expansions or DLC (downloadable content) isn’t necessarily enough anymore to bring a return on investment.

For example, for a game that costs let’s say $100 million to create, produce and market, to break even it would have to sell 1.66 million copies at the standard retail price of $59.99, and that is just to break even. If it doesn’t fare well with reviews, or just simply doesn’t catch on against the plethora of other games being released now, then this could end up being a loss. With the amount invested in games, entire gaming companies can be leveled or take such a blow that they have to layoff staff to recoup losses. The price of entertainment in all its forms has gone up in recent years, but video games have held their standard price point for a long time. After all who would pay $119 for a game with all included DLC and content instead of $59 and just pay for whichever DLC they want if they want it after the fact?

Then when it comes to multi-player games, especially MMO’s and MOBA’s like Heroes of the Storm, you have to produce a never ending stream of new content, moderation, hosted servers, and more, all which require constant upkeep for the company long after the initial investment. You cannot keep relying on new sales to continually pay for improvements, hosting, and moderation, because at some point you end up with more people playing than paying for new copies to cover all the expenses. App based games, like the Rivers Casino Play4Fun app, also rely on microtransactions to fund the development work behind bug fixes to keep the good times rolling.

Implementing micro-transactions and loot crates is preferable over a monthly subscription fee in that you don’t require people to pay money every month to play the game, and is a necessary source of income to help cover the costs when a product fails to meet commercial success, or has a high upkeep cost after its release.

After all, you pay $10 – $15 for a movie ticket to see a 1.5 – 2-hour movie, right? So, by that cost comparison a game that costs $60 should give you about 8 hours of game play content to be equal to the entertainment cost of a movie for an equal amount of time. Yet often games offer 20+ hours, some even 100+ hours of gameplay, and some online games potentially have unlimited amount of content.  There is no other form of digital art and entertainment that gives you as much entertainment hours for your buck.

Micro-transactions and Loot Crates are here to stay, some will only sell DLC content and others will try to fold all the cost into the base game (which is more achievable with single player games which are a dying breed). However, measures should be put in place to ensure that players don’t Pay To Win and to allow players that invest more time in gameplay to gain the same content without having to pay to level the playing field. Battlefield 2 messed up by having players spend way too much time to unlock characters that can bought and unlocked outright. Battlefield 2 needed a more balanced system, and unfortunately the way that the game facilitated micro-transactions backfired and cost the company tremendously in both PR and in stock price.

Micro-Transactions that allow you to get specific content rather than random content is nothing like gambling, but loot crates may very well be depending on how they are implemented. Should there be regulation around this, or should consumers be left to basically boycott and leverage their collective influence to affect the industry trends?