Moscow, Russia (February 18, 2021) — Today, independent developer Tiamat Games is thrilled to announce their high-stakes, seafaring roguelike RPG, Maritime Calling. Set for a PC release later this year, Maritime Calling puts players in the captain’s seat of a sailing ship during a time when the sea was still largely an untamed frontier. It’s up to players to support the crew, navigate uncharted waters, and claim untold riches from the far edges of the world. There’s more to this journey than just glory, though, as Maritime Calling tasks players with managing all aspects of a fully-fledged ship, ensuring the crew stays happy and healthy, while the ship itself stays in tip-top sailing shape, all while choosing the best course to set for finding resources and avoiding hazards. 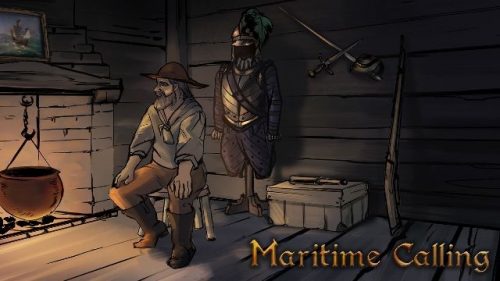 Maritime Calling is set in a thriving archipelago during the Age of Sail, a perilous time for would-be adventurers attempting to make names for themselves on the high seas. After hearing whispers of mysterious lands beyond the boundaries of any known map, a fleet of ships full of accomplished sailors assemble and set out on an expedition to see if there’s even a hint of truth to these tall-tales. Unfortunately, a deadly ambush sinks every vessel save but one with a steel-hearted captain at the helm — that’s where the player comes in. Being the only ship around for as far as the eye can see means captains must earn their stripes by supporting the crew at all times, even while the boat is frequently under the threat of storms, reef-packed shallows, or other navigational hazards! If players survive these dangers and keep the crew happy, it won’t be long before they discover new lands and exquisite treasures! Remember, for all the sea’s perils, its rewards are bountiful. It’s time to carve out a place in the annals of maritime history!

Check out the announcement trailer below:

“Our goal with Maritime Calling is to create a sailing experience that fills you with a stirring sense of discovery,” said Nikita Veselov, Game Director on Maritime Calling. “It’s a title with all of the spontaneous fun roguelikes are known for, while featuring in-depth crew management systems that bring the ship alive.”

In Maritime Calling, each game begins with players setting out to claim unexplored, resource-rich lands for the crown. Captains must utilize special masteries and skills to ensure the ship is properly maintained at all times — even if that means ordering members of the crew to take on dangerous and decidedly un-glamorous tasks. Everyone aboard relies on the captain to steer the ship clear of environmental hazards, while simultaneously preparing for unexpected attacks from rival nations. Taking these threats seriously is crucial, as a sinking ship means it’s “game over” for the player! Thanks to procedural generation, though, no two excursions are the same, so players don’t have to sweat not being Blackbeard from the get-go.

Work-life balance is important too! Being captain means that players will need to speak with crewmates to get a feel for their personalities while taking advantage of their strengths and weaknesses. A crewmate that’s adept at navigation probably should not be on the front lines of a battle as their death could mean that the ship becomes lost at sea forever. Work through it all, and maybe the crew will be lucky enough to find islands with specialized quests that will lead to rewards like forgotten treasures. This is far from a pleasure cruise, but gaining glory was never a relaxing nor easy pursuit.