Lately, mobile devices seem to be the hottest thing in consumer-oriented technology. From the humble tablet evolving to an elaborate laptop alternative for many professionals that need work done on the go, to iPhones consolidating their place not only as powerful machines but also as a cultural statement, mobile devices have risen among other options as the future of must-have gadgets. When they were first introduced, nobody would predict that smartphones would surge in popularity so quickly and effortlessly.
Yet it was also functionality that rose beyond expectations, as smartphones have gone on to conquer unlikely markets – such as online shopping.

Despite early concerns about their suitability, the newer generations of smartphones with larger screens and more effective software keyboards have established themselves as a viable option for online shoppers. In fact, in the third quarter of 2017, online shopping on mobile devices accounted for 23% of all e-commerce spending. It seems that most consumers reach for their smartphone when shopping for entertainment and games, as 58% of all e-commerce spending on toys and hobbies and 55% of money spent for video consoles, video games, and relevant accessories is done through a mobile device. Music, movies and videos come in third at 51%, along with jewelry purchases, while consumers do not prefer to shop online for electronics (14%) or computer hardware (13%) via their mobile devices.

You will find more infographics at Statista

E-Commerce the Future of Retail Shopping?

These statistics, combined with the fact that e-commerce seems to be the future of retail shopping – with online retail giants like Amazon and Ali Baba to thank for that in big part – make it clear that mobile devices will have a crucial role to play in that surge. In the fourth quarter of 2017 and during the year as a whole, e-commerce in the US demonstrated a growth that was the fastest it had seen since 2011 – and amounted to 13% of all retail transactions and an astounding 49% of the total sector growth. Just in the US, roughly $453.46 billion was spent on online shopping in 2017, in a total of $5.076 trillion for all retail purchases. This amounts to a 16% rise in e-commerce, compared with over $390 billion in 2016.

Yet when shopping online from a mobile device, consumers need to be extra careful as the latest wave of malware attacks and flaws in Wi-Fi security have taught us. Except for the usual advice like only logging on to trusted networks, using better passwords and updating your phone software regularly, there are things that consumers should look for on part of the online vendors, too. If you are going to share your banking details with an e-shop or shopping app, make sure that it complies with PCI DSS – that stands for Payment Card Industry Data Security Standard. It is a set of security requirements that all major card issuers like Visa and MasterCard agreed on in 2004 in order to protect debit and credit card transactions against online fraud. Online shoppers should also always look for the “https” in the URL instead of the plain “http” – the former indicates a secure connection and guaranteed added safety for your banking data. Finally, make sure you log off these apps and sites if you tend to share your gadgets with others. 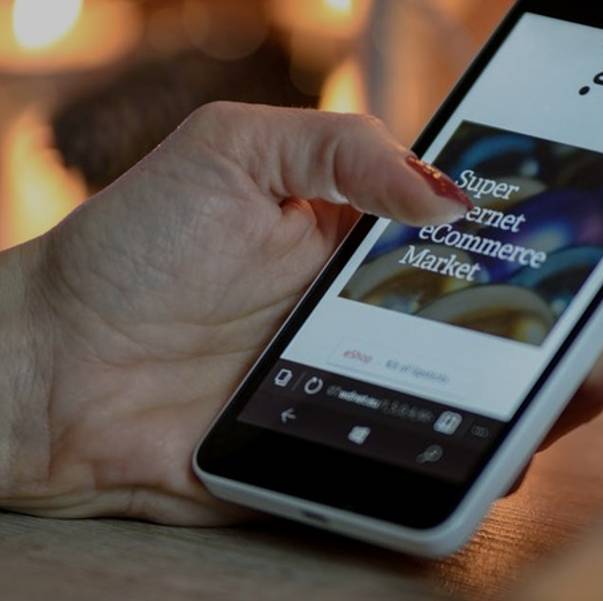 These simple yet crucial features are particularly crucial when shopping on smaller scale e-shops that do not necessarily have the resources that Amazon has to invest in the security of their website. So next time you grab your smartphone to order something, take that extra level of care to examine the security of your transaction!