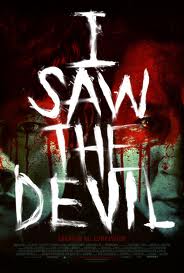 We are already familiar with director Jee-woon Kim’s amazing film work in The Good, the Bad, the Weird, which starred both Min-sik Choi and Byung-hun Lee. This dynamic trio is the reason why a Korean horror- revenge cinema will always be a guaranteed win to watch.

This film, however, has to come with a warning. There is nothing held back in this film—which adds to it being a visually impressive and extremely violent film.

Joo-yeon (San-ha Oh) has a flat tire, and finds herself stranded on the roadside, on a late and snowy winter night, when Kyung-chul (Min-sik) offers to help change her tire. She refuses, because a tow truck was already on its way. Kyung-chul, after pestering her again about her tire, brutally attacks Joo-yeon, drags her to his car, and takes her away. Now Kyung-chul, likes to sexually assault his victims before he mercilessly slaughters them–and his newest victim, just so happens to be the fiancé of Soo-hyeon, a highly skilled secret agent–did not take too kindly to his beautiful fiancé being murdered. 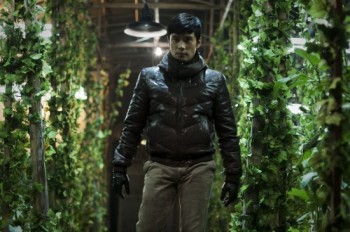 This incident set the stage for the most brutal cat and mouse game ever documented on film. One of shocking scenes, well, aside from watching some skull bashing and limb hacking—was after Kyung suffered another attack by Soo-hyeon—himself, and after a while of watching the film, it becomes difficult to discern who the “devil” here truly is. With Kim being deep in grief at the loss of his love, he conveniently takes it out on Kyung. Soo-hyeon, himself, becomes a monster, brutalizing Kyung in horrific and vile ways, then letting him go–just so he could track him down again; breaking his wrist, even severing his Achilles tendon, to punish him for murdering his beloved fiancé.

What is so disturbing about watching this film is the gruesome depiction of human bodies being hacked and carved, without so much as a grimace from Kyung’s character. The director does not have a problem with you hearing the victims beg for their lives in one instance, and the sound of a clever hacking away at arms, hands, or legs, with no exception to rolling heads—literally. This is what makes this film intriguing to watch–even with all the slaughter that is being depicted–I found it hard to turn away.

When measuring the “quality” of a revenge thriller—it has to meet a certain criteria—the right psycho, to murder a loved one; a grieving, hell-bent on revenge lover; and the right director to connect all the pieces together. Jee-woon Kim successfully, and brilliantly, delivers the most shocking and brutal scenes to ever be depicted on screen—to add, with a brilliant and consistent story. I Saw the Devil has everything fans of this genre want in a serial horror film. With 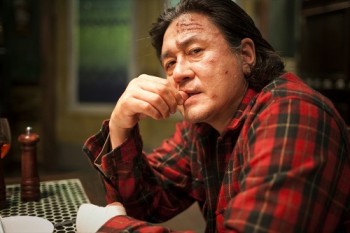 incredible performances by Min-sik Choi as Kyung-chul, famous for his role as Daesu in Oldboy, he thrills us in his role as a cool, calm, and collected serial killer who has an obvious disdain for women. Also, let’s us not neglect Byung-hun Lee’s role as Kim Soo-hyeon, in mourning and at times become just as sinister in his plot for revenge that the lines of good and evil are blurred. His descent into madness will concern you. Brilliantly filmed, scripted, and casted—I Saw the Devil is the most gruelingly satisfying 141 minutes of pure, unrelenting action—and the enduring, emotional turmoil of watching just how far Soo-hyeon would go to avenge the woman he loved.

Genre horror films like I Saw the Devil are oftentimes pushed aside from the media mainstream, and not appreciated because they push the threshold of moral and cultural  norms— however guilty, we all still line up and will watch films that depict humanity at its worse, for example the Saw and Scream movie franchises, take the safe, light-hearted approach to death and judgment.

Again, I will have to issue a warning in watching this film—as it may not be for everyone. While I am privileged to be able to watch and review these unique types of films, I take great pleasure reviewing them with a genuine appreciation for their creative impacts, and the director’s willingness to challenge the critics and venture outside of the horror-genre norm.

I Saw the Devil, and I liked it.

Deleted scenes –  the deleted scenes are just as potent and thrilling to watch as the entire film. Many of the deleted scenes from the movie were not necessarily cut because it was not good enough to put on-screen, it was only a matter of adequate screen time. Raw and Rough: Behind the scenes of I Saw the Devil (2011) gives you a behind the scene look on how the film was made and some of the director and actor commentary, which was pretty interesting to watch.