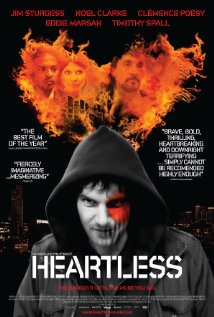 Heartless (2009) is a fantasy-horror thriller, written and directed by Philip Ridley, that stars Jim Sturgess (21, Across the Universe), Clémence Poésy (127 Hours, Harry Potter and the Goblet of Fire), Noel Clarke (Doctor Who TV series, Centurion), and Joseph Mawle (Game of Thrones (HBO), Waking the Dead TV series). The film is about a young man with a heart-shaped birth defect, who discovers that it really isn’t a good idea to make a deal with the devil.

Jamie (Sturgess) is born with a heart shaped birthmark on the left side of his face, and is a socially awkward young photographer working in London, who begins to see some strange things on his nights out after work.  He witnesses these reptilian-faced creatures, dressed in hoodies committing strange crimes– like throwing the occasional Molotov cocktails at innocent pedestrians who travel the city at night–and writing graffiti on the walls. His mother falls victim to one of these attacks, and a vengeful Jamie decides to take matters into his own hands. 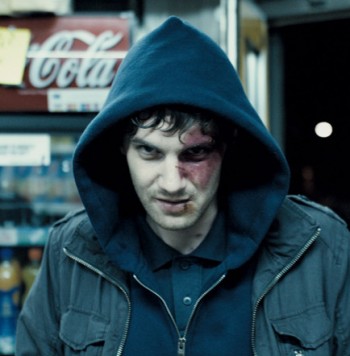 Those matters are what drove Jamie into the eyes of Papa B (Mawle) who offers him a deal to remove the birthmark on his face and body, in exchange for a favor. Unbeknownst to Jamie at the time, the task is to kill someone. Of course, dealing with a demon comes with its own caveats, which Jamie finds that it will not be an easy task to remove himself from.

Heartless (2009) turned into an extremely, slow-paced horror that failed to maintain the same excitement as it does in the promotional efforts for the film. It turned into an ever-twisting drama–that had absolutely nothing to do with connecting the film’s plot–his brother being a thief or junkie on the run from some anonymous person, who enters the film just as confusingly as he exits. There is a little romance thrown in there—and Jamie finally lands his first big kiss—at 25.

There are other bits in the film mildly worthy of mentioning; stellar performances by Sturgess and Mawle, the cinematography and brief CGI in the film fantastically created a dank and hellish atmosphere. The overall concept for the film was extremely creative. Nevertheless, no thorough execution is this film’s downfall. It wound up only succeeding as a great concept for a horror genre film. I feel a Hollywood remake underway. 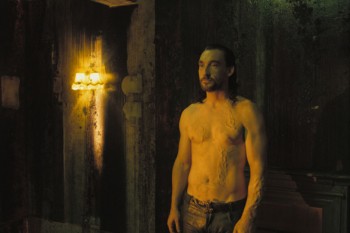 Philip Ridley’s supernatural thriller, Heartless (2009), turned into a melodrama of otherworldly proportions. We watch horror films to be horrified. Heartless (2009) could have been a great horror film if the proper director had a hold of it. So many of the more interesting concepts of the film were wasted. The opposite effect was achieved. At the end, I was left with a tear in my eye, wondering why I ever decided to watch Heartless in the first place.

What people (don’t) do for money?

Horror films have really become a hard sell these days. The Saw and Scream film franchises have turned into nothing more than an insignificant comedic regurgitation of predictable –high budgeted- bloody violence that may soon run out of leading mindless, pretty things to slaughter. These hyperactive kill-or-be-killed horror genres have taken its financial toll on the box-office as well. Case in point, the Scream 4. With a budget of $40 million, the overall domestic gross for the 2011 film was just under $33 million. Of course, a box-office failure. However, if we take the sum of all sides, meaning—all four films—an estimated $491 million, overall, prepares you for another franchised mediocre horror.

I had it up to here with studios cranking out sub-par entertainment sequels, selfishly geared at emptying our pockets—knowing full well—we will still line-up at the troughs, swallowing whatever slop they wish feed to us.