[easyazon_image asin=”B004XFZ4JK” alt=”Season of the Witch” src=”http://ecx.images-amazon.com/images/I/519RqygpELL.jpg” align=”right” width=”300″ height=”369″]Season of the Witch (2011) is an action/adventure/fantasy film directed by Dominic Sena, written by Bragi F. Schut and stars Academy Award Winner Nicholas Cage (Leaving Las Vegas), Ron Perlman (Hell Boy I & II film series), and Claire Foy (Going Postal, and The Promise TV Series) in a film about 14th-century knights transport a suspected witch to a monastery, where monks deduce her powers could be the source of the Black Plague.

I have to say that I was surprised by Season of the Witch (2011). It wasn’t that spectacular, or hardly a memorable of film. Nevertheless, it most certainly seals itself in a B-movie class all its own.

Behemen (Cage) and Felson (Pearlman) are 14th century knights who warred with, and slaughtered the innocent in the name of God during the crusades for a little more than a decade. The film entailed spectacular battles and montages over time. The scenes, themselves, were fantastically choreographed and brutal. However, Behmen and Felson developed a conscious after one too many slaughter-filled battles, and realized that their doing “God’s work” resulted in slaughtering innocent villagers–women and children. They both decided to desert the Crusades and lived their life in exile.

In their journeys, they encountered the city of Marbog, where the black death–the plague–is rampant. They are soon discovered and met as deserters by the local 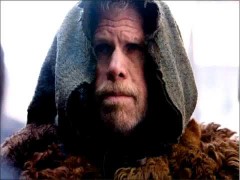 religious order and their Cardinal, D’Ambroise (Christopher Lee), which I had to search for after viewing the ending credits because he was so disguised and layered under a tremendous amount of gruesome plague boils (makeup) that made him completely unrecognizable. The Cardinal, believed that a witch cast the curse upon them and that young witch or “the girl” they captured while mumbling strange things about town, was imprisoned in the dungeon below them. They were tasked to transport the girl to an old and crumbling monastery so that she may be exorcised by the monks there, reading an old tomb and ridding her of the demon. So she was caged up and drawn by horse and buggy–escorted by Behmen, Felson, a priest by the name of Debelzag (Moore)–Eckhart (Ulrich Thomson), who was grieving the loss of his own daughter to the plague and a bumbling misfit, Hagamar (Stephen Graham) who will serve as their guide. Lest I not forget, a knight wanna-be in (Robert Sheenan). 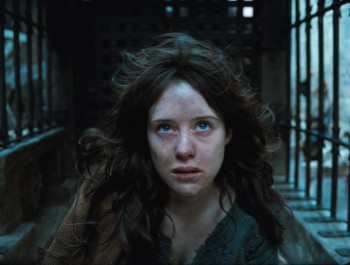 They encounter on their journey possessed wolves, an almost impassable bridge. The entire trip to the monastery was clouded in uncertainty as to how can this frail girl actually be a demon? Strange things began to happen, and Behmen begins to suspect that this young girl had something more about her than he originally thought.

The story main conflicts were the actual plausibility of the different elements that comprised the film’s intent overall–like how Behmen and Felson surviving the Crusades with not so much a scratch on them; women being considerably being labeled as witches and the root of all things evil in those times, etc. But this was okay because the film was actually watchable. The special effects were boss. However, you still get the same, bland acting performances from Cage, and Pearlman’s role was seriously undermined–only allowing him flat, one-liners and as an empty headed tank. But never matter. The pair did great together and enhanced the film and story engagement.

In the end, Season of the Witch was a mediocre film. I guess it was as good as it could have been.

Season of the Witch (2011) DVD features include