The second season of Grimm will premiere on August 13.  For a supernatural drama show that started slow but then gained a huge audience, an early premiere is quite a feat.  Anyone who missed the first season, or those that just want to catch up, can find all of season 1 on NBC’s website.  What will the new season be like though?

Before we look ahead, you can do a quick recap with this seven-minute video from NBC.

For one thing the show is going to take a turn with the monsters now searching for Nick instead of him running across them accidentally.  Nick has grown into his “skin” so to speak as a Grimm and now has confidence in his abilities.  Of course he still has Monroe, who has become a Grimm sidekick despite being a creature that Grimms normally kill, and Nick has discovered that his mother is still alive.  What meeting her holds in store for him should be interesting to see as the new season progresses.

The second season will pick up right after the first ends, moments after in fact.  Nick will have to deal with his life unraveling uncontrollably especially since now he’s got to worry about Juliette on top of if his mother is good or bad.  Plus will viewers find out anything about Renard?  In one interview the showrunners, David Greenwalt and Jim Kouf, say that yes we will and quite a bit early on. 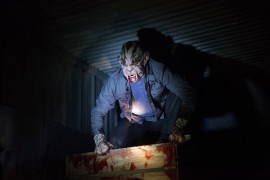 Unfortunately not much else has been revealed except the Siber-toothed villain Nick will be fighting in the first episode.  Mark Pellegrino, Jacob from Lost, will also have an appearance as one of Hank’s high school friends that is a creature on the second episode.  Makes you wonder if Pellegrino will have a reoccurring role like Analind and make Hank’s life even more difficult now that he’s seeing things.

Grimm Season 2 will have several episodes on Monday night before going back to its normal Friday time slot.   I just hope that moving Grimm, even for a short time, doesn’t prove to be a downfall.  I also have to wonder if there are enough Grimm Fairy Tales to keep the show going with its use of a line from each at the beginning of the episodes.  I guess we will wait and see as the season plays out.