Ninja Bounce is a new iPhone game that is similar to rhythm-based action gameplay where it relies on your fast reflexes and the ability to make precise timing. 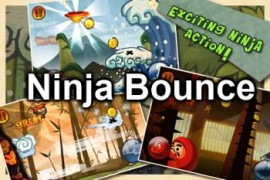 This game is a side-scroller in which you control a Ninja trying to avoid an oncoming deathly fire. To avoid dying, you must jump onto the oncoming pad by correctly hitting the right button that corresponds to the color of the pad. However, that is easier said than done as the distance of your jump and the points collected are entirely based on accurate timing. For example, if you time your jump perfectly then your Ninja will jump farther and will collect more points. Mistimed jumps will do the opposite and will bring you closer to the wall of fire. 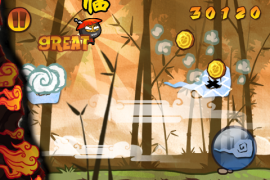 Though it sounds simple, it becomes challenging as you progress in the level. The game throws you unpredictable patterns that make maintaining a rhythm progressively difficult. Also getting the timing right is another challenge as the approaching pad will approach you at different lengths.

This game offers 2 different modes, challenge and time attack. In Challenge mode you will try to collect the most amount of points before dying. In Time Attack, you will try to beat the clock as the game throws you many different combinations.

Graphically this game represents high production quality. The animation of the jumps and moving 3d background are a really nice touch to this game. Also, the stages and overlook of the game is reminiscent of Ancient Oriental culture. Overall, gameplay is challenging and addicting for players who love trying to beat their own score. This is a great game for casual iPhone gamers! Currently the Developers are having a 50% sale to promote their contest with the Top 3 Scores posted on their Facebook fanpage receiving $100, $50 and $10 iTunes Giftcards.

Content Creator/Owner of https://t.co/iWP6afuOc9 for Tech, Game, Entertainment and streamer at https://t.co/594fXMdMIA
Cellulose Board Game – Back to School for More Plant Cell Biology https://t.co/GSgpBbsT9L - 37 mins ago