PCMagazine did a recent review of the Onlive gaming platform which expanded its offering recently to now allow for streaming of platform quality games that you can play on your iPad or Android tablets.

Onlive is a game streaming service similar to how Spotify streams music and how Netflix streams movies.  With Onlive typically you purchase a smaller “console” like device that acts like a streaming receiver and you can hook it up to any television and play games that are streamed to your device.

Now OnLive allows you to stream these games to your tablet device which basically allows you to take the games with you even more places.  The caveat however is that you need to have a really good broadband connection or the whole system is pointless.

When streaming quality games the amount of bandwidth used is tremendous and far more than an HD Movie.  Combine this with the controls having to respond their actions back to the game server and back to your device again and you can have some wicked lag and jitter problems if you don’t have network stability. 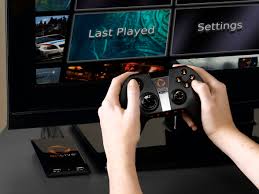 For the iPad or Tablets, OnLive games really require you purchase a wireless gamepad like controller to play with.  According to PC Magazine some games are quite playable if you have a good Internet connection but others just lag too much or the graphics quality degrades so much you can’t really enjoy the game.

Still, if the technology continues to improve and bandwidth continues to expand we could be seeing a big future in game streaming to compete with dedicated consoles at a much more affordable price, or as a 2nd device in a home where there are multiple gamers.

What do you think of OnLive streaming Xbox quality games to your iPad or Android Tablet?