I have always been a little behind in technology, and my phones are no different. Up until a couple years ago I was still using a traditional flip phone, and as soon as a year ago I was using the simplest smart phone I could find. That was until I was introduced to the Samsung Series of phones. My love affair began with the S5 and now I recently made the leap to the Samsung Galaxy S7.

Something dawned on me though when I was performing this upgrade – it did not matter what was in the phone if I did not have the proper protection for the phone. At the time of purchase I bought a simple case that I felt would provide adequate protection to this pocket size technological wonder.

As luck would have it, and as it does in every other aspect of my life, it was not near the protection it would need for my careless nature. Knowing I needed something with a little more protection, I decided to review Otter Box’s Commuter Series phone protector. 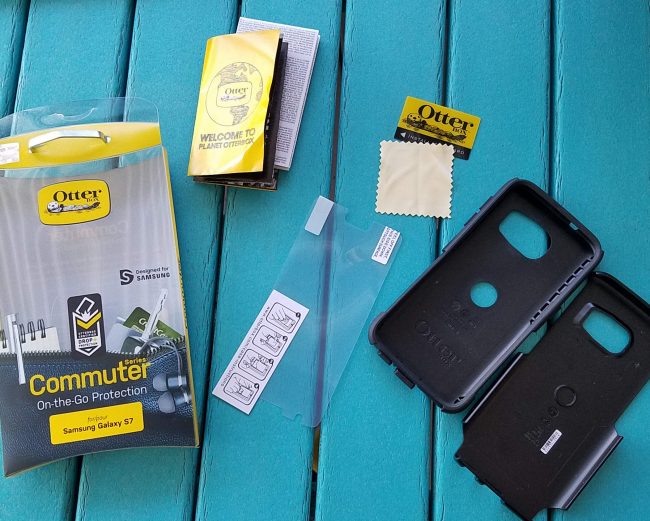 The Otter Box Commuter Series does provide on-the-protection and has a couple parts to it that come included in the box. The first is the rubber outer case that will basically wrap around your phone and then the [plastic overlay piece that locks this rubber outer core in place. It also contains a screen protector to place on your screen.

I had initial concerns about the potential bulk added to an already large phone and I quickly noticed that the thickness did not increase that significantly and the added “bulk” actually made me feel like my phone was protected.

The Otterbox Commuter Case has a couple of notable features such as Drop Protection (which does protect when dropped), Dust Protection (I can not confirm or deny this since my phone does not sit alone long enough to gather dust), Scratch Protection (Since I have dropped it a couple times and it comes out up scratched I would have to say this works), Dual Layer Protection (Yes, that second piece locking in the rubber piece makes the phone seem much more secure that without it) and Screen Protection (Since the protector goes around the screen I can see how this would protect, and since it has come out unscathed during drops, I would say it is working).

Over all I need a protector that would stand up to the massive abuse I knew this one would get. I have been testing it for a while now and it is not only nice looking but keeps the phone safe. If you want a protector that takes abuse then this is the one for you!