I just recently finished re-watching this absolute masterpiece, and frankly, I’m more floored than I was when I was a child. Back then it was just a spooky show that came on late at night on Toonami, but now that I’ve grown, I’m much more capable of analyzing it as a whole. As always, you can watch this fine piece of anime over at Funimation, this article contains some spoilers, and now let’s get down to explaining this amazing piece of cinematic horror.

Paranoia Agent is a psychological thriller created by director Satoshi Kon, and works to build tension through a mix of your typical slasher-esque chase scenes, as well as the general mistrust of one another, and PARANOIA (whoa an anime where the title plays into the plot, what a stretch of the imagination am I right?) that builds as the series reaches its climax. It also provides several lessons on integrity, and how much lying can weigh on someone’s subconscious, sometimes with extremely lethal results. Our story begins with Tsukiko Sagi, a shy character designer who creates a smash hit in the form of the immensely popular dog Maromi. As she’s walking home one evening, she’s attacked by an elementary schooler on inline skates. The police intervene and believe she’s lying about the attack until they get news of a second victim. A string of attacks is committed, with the victims only remembering three details about their aggressor: Inline Skates, a baseball cap, and a bent golden bat. 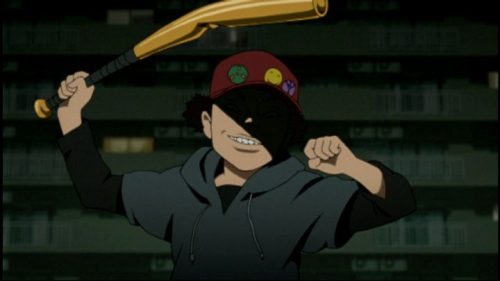 The series antagonist is fed by the communities tension, becoming ever more monstrous as lies and over exaggerations are laid out, and proceeds to carve a path of death and destruction through Tokyo, going from a simple school-age kid to a hulking monster, complete with a much more brutal, blood-covered weapon to fit. As “Lil Slugger” (The name the police give the attacker in the English dubs.) continues his slew of random assaults, the community begins to mistrust one another, thinking that anyone around the corner could be the killer. Two men, Ikari, a private security guard, and Maniwa, a “wandering knight” intend to confront Lil Slugger, but first meet Tsukiko, and it’s revealed that Maromi is based off a puppy that Tsukiko had as a child. One day, she accidentally dropped its leash, and it ran into traffic, being killed almost instantly. Fearing reprisal from her father, the young Tsukiko invents a story about an inline skate wearing, bat-wielding puppy killer. Lil Sluggers first “attack”. 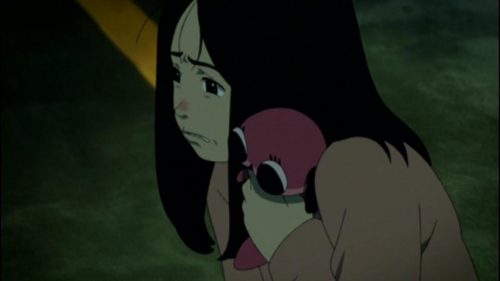 On her admission, it’s revealed that the Slugger is simply a figment of her guilt, and by admitting her faults, he’s defeated. In one of the earliest examples of Tulpas (Phantasmal entities created through the collective belief of a community) in media, a killer was born through the fear, mistrust, and general tension of an entire community, with them also using Maromi as a form of escapism to attempt to avoid their own problems. It was an absolute joy to watch, and frankly, I’m still on the edge of my seat.

Stay safe out there, watch your back, and don’t forget that Funimation has more great examples of fine anime like this. 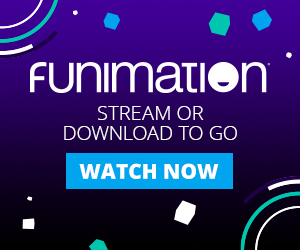