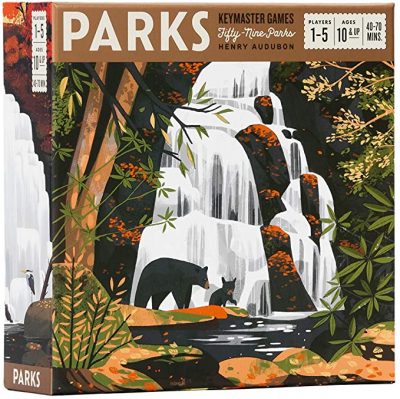 WHAT GAME IS THIS?

PARKS (“Park”) is a set collection, worker placement and little card drafting game. PARKS  comes from publisher Keymaster. Moreover, it is in partnership with the Fifty-Nine Parks project, a project to honor and preserve national parks in the United States. In the game, players will move their meeple (in PARKS, Hikers) on a road trip through the four seasons of the year, gathering resources and visiting national parks.

PARKS is a game for 1-5 players. During a turn, players take turns to perform the following actions:

In this action, players can take the corresponding action on the tile you just arrived: get resources (water, sunshine, trees, mountains), get canteen (water jug ​​- to perform more functions with water tokens), take pictures, etc.

Visit/conserve the park or purchase equipment

When you reach the last tile on the trail, you can choose one of three actions to take:
Visit the park: exchange the corresponding resource for a park pass. Each park corresponds to a number of points depending on the number and variety of resources.
Park conservation: save a random park (if you find yourself close enough to “visit” it and don’t want it stolen). Conservation park does not count. The first person to enter this box will also win the right to go first in the following season.
Buy equipment: use sunshine tokens to buy one of the available tools. You can use the effect of the tool cards for the whole game (replace resources with other resources when visiting the park, reduce resources when visiting the park, …)

Prepare for the next season

When all hikers reach the end of the trail, a new season begins. At that time, a new tile will be added, the order in which the tiles are shuffled, and the weather and characteristics for the new season are revealed on the Season card.

After all four seasons, players total points earned from park visits, photo shoots, and bonus points for reaching the goal on the Five card given at the beginning of the game. As a result, the player who scores the most points at the end of the game is the winner! 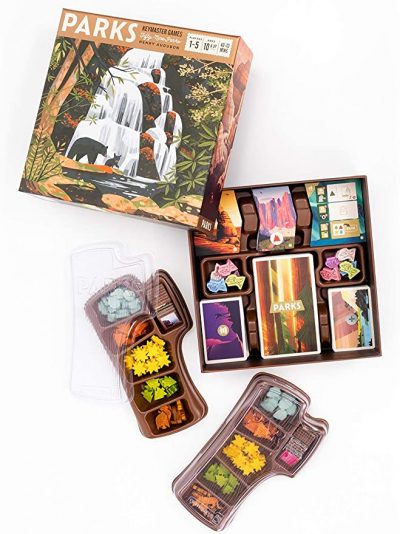 Where is the FUN ?

Say PARKS is a healing game because its art is very beautiful. Due to the background from the Fifty-Nine Parks project, PARKS has a great set of artwork available to make cards for the game. There are 38 artists with a variety of styles and techniques worked on this artwork (and more if you take the PARKS expansion – PARKS: Nightfall). The cards have high quality. They are large, and are comfortable to hold. So that, when collecting a card for (visiting a park), players have a real sense of accomplishment.

Besides beautiful artwork are quality components. Hikers and resource tokens are both made of wood, where the 12 wildlife tokens (which replace any token) are in the shape of 12 different animals. The token tray and insert are also very nice and sturdy. After unboxing, it’s worth it, no need to talk about playing.

Thematic of the game is very good. Gameplay is associated with the theme, creating the feeling that you are going on a real trip. Personally, my favorite part is the photography part, I took the camera all the time and also scored a lot of points.

The game creates interaction when players can win to preserve the park to block each other. For instance, players can see which resources that the others are trying to achieve. It is also about limiting the movement from others.

Although there is interaction, it is not too harsh and nor too cutthroat. In general PARKS is still a healing game, still chill, players can still carefree without solitaire.

The no fun part!

The game goes through four seasons, so by the middle of season 3 and season 4, players will feel a bit long with familiar actions (although the order has been changed), and if the game is played with 5 people, then Waiting for my turn is also a bit boring. The game is most fun to play 3-4 people, less than 1 hour.

1 player is not recommended! With solo mode, the game creates a virtual player (ranger – ranger) to race with him, and the decisive move is by flipping cards so it is quite unlucky. That also makes me uncomfortable with limited options and loses the healing feeling when playing the game. In general, it seems that the manufacturer tries to squeeze solo mode into a game that is already very good when playing multiplayer. But is it really better than nothing…

Nice game (super super nice), good thematic, relaxing play. The law is easy to understand, no need to read much. For peaceful people who don’t bite each other, people who like beautiful art, like nature and plants.