I run a lot of giveaways and often work with co-sponsors and co-hosts who want to write a blog post to share the contest.  Rather than send the entire HTML code via social media or email which sometimes can get broken or modified with script code elements removed or damaged there is an easier way to share script code that you may want to share with others.

This service is called Pastebin

Pastebin is a website where you can cut/paste script code and it will host that code and provide you with a URL link that you can share with others who want to get the same exact script code so they can easily copy/paste it into their own blog posts.

With Pastebin all you do is go to the site, login or register, and paste your script code that you want to share with others: 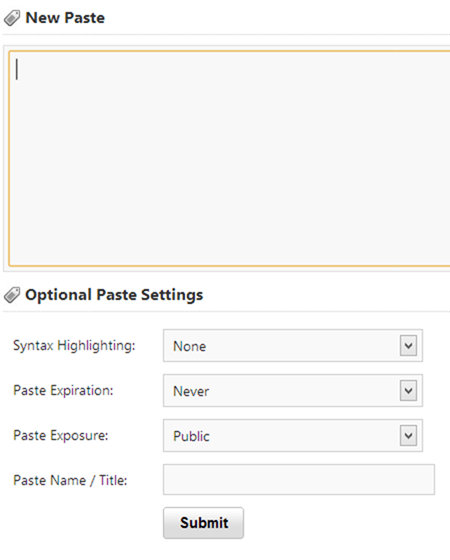 Once you do that you can choose to highlight the syntax, set an expiration term, set whether the code is public or for specific people and then set a name/title for your script code you are sharing.

Then you will be provided with a link like http://pastebin.com/nxVKwYhy for example which you will share with other readers or bloggers who need the script code.  When they click on the link they will be taken to a page that shows the script code for them to copy and the RAW Paste Data as well. 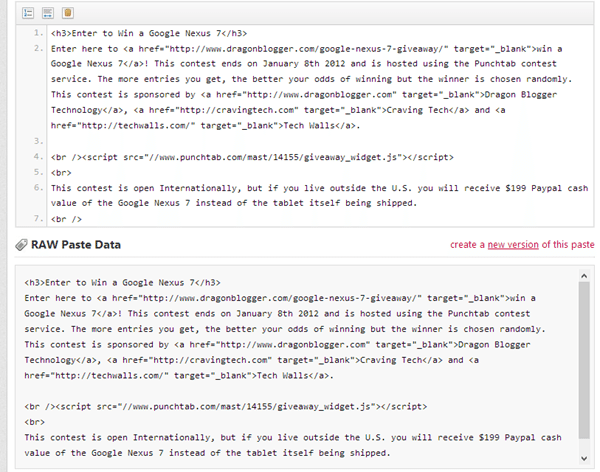 It gets even easier to, a user can simply click on Embed at the top of the page and get an embed javascript so that they can embed all of this code automatically in their blog post just by copying in the one embed script line.

They can also download the script code as a txt file as well.

If you need to share script code for giveaways, sweepstakes or contests and you want to make sure everyone posts the same code easily and simply, there is no easier way to share than with Pastebin which can not only save you time, but also save your readers confusion.