When I ran my 10 Days of Giveaways I had a very small advertising budget as I had only collected enough sponsorship for some of the prizes and not any additional for advertising or shipping costs (oversight on my part in fact).  I did however decide to test a giveaway promotion site called Emperola.com.  I decided that since my Google Nexus 7 giveaway was rapidly becoming the most popular, I would put all my eggs behind this one and do a little extra promotion for it.

In the end, I think it turns out that Emperola was a pretty good investment, I paid $10 for the 1 week featured listing:

Now, I leveraged Google Analytics to see how much referral traffic I got from Emperola.com, because Emperola has the giveaway hosted on their site with a link to the original giveaway page to enter it makes it easy to track referral traffic.

I saw my giveaway advertised in their mail listing for several days. 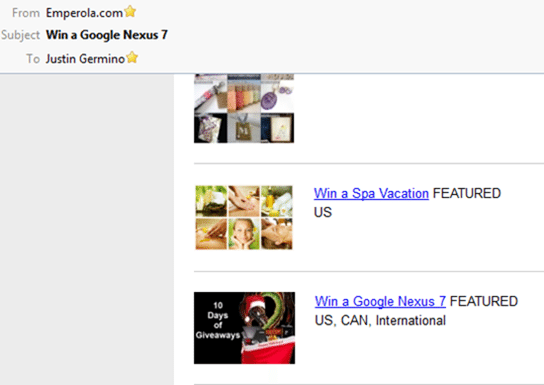 I also checked out my giveaway listing on Emperola’s website. 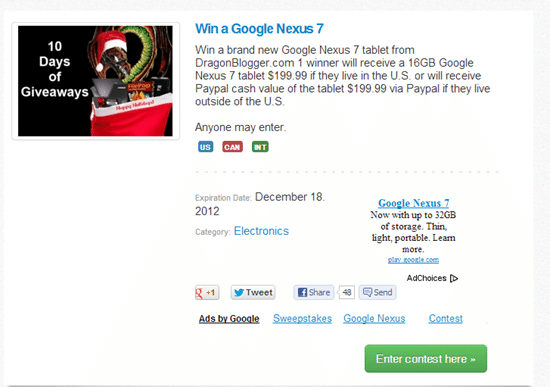 My Google Analytics showed the results on how many referral visits the Emperola network brought me. 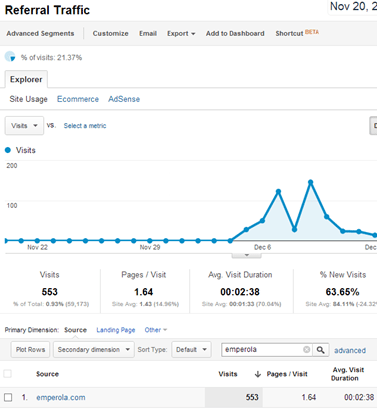 You will notice It shows 553 visits for a handful of days during which the featured promotion ran.  They had an average visit duration of 2:38 which is plenty of time to assume they entered the giveaway which takes seconds to join.

If you calculate my ROI this was $10.00 / 553 visits which is .018 CPA (cost per action) which is really good, less than 2 cents per visit and I have to assume most of those visits entered the giveaway because they would have had to make at least 2 clicks (1 to Emperola website from email, and a 2nd from Emperola to DragonBlogger.com why would they have done the 2nd click if they weren’t going to enter.)

This surely helped add a few thousand entries at least to the Google Nexus 7 giveaway and more importantly this was a new audience that I wasn’t reaching by just promoting the giveaway in my own Social Media networks.

Based on these results, I have decided that Emperola appears to be worth investing some advertising budget in if you want to expand the visibility of your giveaways or sweepstakes and boost participation.  I would recommend promoting and spending at least $10 if you are giving away a prize worth $100 or more, at least double if your prize is worth more than that.