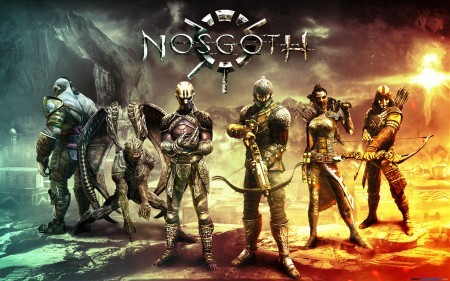 Nosgoth, is an online arena style third person shooter (say that ten times fast) for the PC that has recently begun a closed beta on the PC, and boy oh boy is it something to see. Set in the Legacy of Kain universe, Nosgoth isn’t quite ready to give up any tidbits of it’s plot quite yet. However, a brief amount of play will let you in on the basics. Vampires are the bigwigs, and the humans don’t seem to like that. Both sides often mention that the humans have begun a rebellion, but if they rebel like they play then it’s going to be pretty one sided. It would be like watching my juice box annex the dining room.

Both the humans and the vampires have four classes, each of which can be unlocked through artifacts that are received at certain levels, and runes (see cash). Normally I’m against any game with an in game credit charge feature, but there really isn’t anything you can buy with cash that you can’t get just by playing. After a few hours into the game I had earned a new class and several special tools and didn’t feel like anyone who shelled out all their lunch money had an advantage over me. The environments are also very stunning, I feel like each of the three available arenas could have come with a guidebook. How did that corpse get into that wagon? Who keeps leaving these alchemy stations everywhere? Whats with all these freaking birds? We may never know. 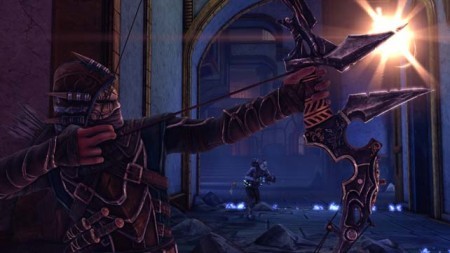 The humans focus on ranged attacks and each seem to have tools to deal heavy splash and area damage. They are difficult to master and in most situations a straight human on vampire fight will result in a dead human and a quenched vampire. However when the human team coordinates attacks and works in tandem to defend each other, they are almost unkillable. Unfortunately, with the beta in the condition it is in as of this review, team chat and party mechanics are flimsy. This results in you being thrown into a town with three other humans, and watching your death count climb ever higher as you wait to be… 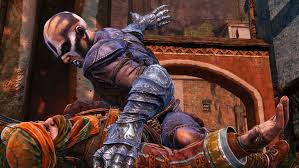 THE VAMPIRES. Normally I’m not at all interested in gimmick themed races, but after the first few minutes of vampire play, I was hooked. The vampires have no equipment to speak of, but that’s completely fine because they are a joy to play. Firstly every single vampire has the ability to climb nearly every wall and do some serious parkour. The only exception to this rule is the vampire that takes flight into the very heavens themselves. Well not the heavens exactly. More like a sky hell, I suppose. The vampires are each incredibly unique and one of the races even has the ability to take over the minds of other players and walk them into a mosh pit full of your re-dead friends. You can even become one of the other team for short periods of time in order to score a fantastic back stab. However when a 4v4 becomes a 3v5 the humans usually get suspicious and start shooting…everyone.

Unfortunately for Nosgoth, closed beta means there is still more work to be done, and hopefully they will start with some sort of party mechanic. Not that I mind meeting new people, but I can only stand so many “you guys suck” and “my team is lame” before I want to switch to the vampires and open that guy up like a Capri sun. Still that is inevitable in the world of online games, and it doesn’t have much impact on the game itself. I’ll be eager to see where this one goes.

You can find Nosgoth on Steam and play for free here: http://store.steampowered.com/agecheck/app/200110/