Being God is not as fun as you’d suspect, especially when your followers are not in the mood of respecting your will and are thinking of usurping you. Their approach might not be the most effective or smart one, but they seem to be undeterred in their attempt to build a tower that will puncture the skies. It is the high heavens from where you will make your stand and crush the Babel rising under your iron first. The premise is interesting but the way things actually happen are rather mundane and tedious. 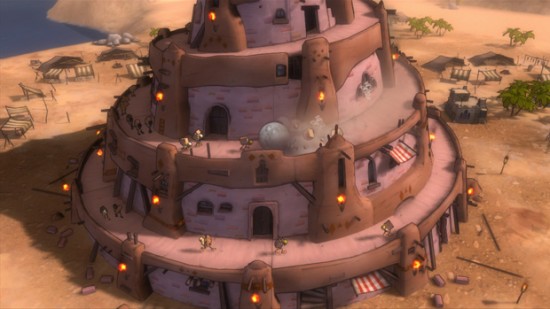 Babel Rising is basically another take at the popular tower defense genre, only this time there is not line of fortifications to erect to fend off the invaders. It is you against millions of mindless drones and despite your mystic powers, the odds are stacked against you. This is one difficult game but for all the wrong reasons, since the challenge comes mostly from the unresponsive controls and sub-par game mechanics.

Before each stage you can choose two elements and use them to bring down the structure your followers are trying to erect. They are diligently pushing forward so you need to time your actions carefully and dose your attacks, because despite being a God you are not quite omnipotent. The “ultimate power” is just as the name suggests one that can tip the scale in your favor, but you can’t use it all the time. 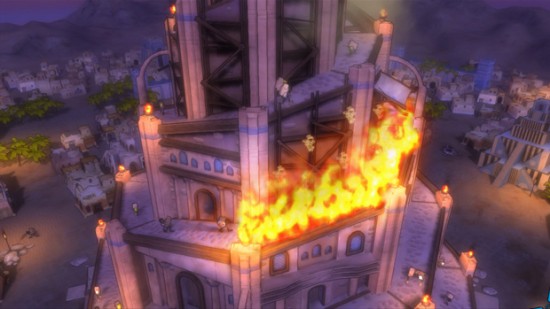 The main issue with Babel Rising is that despite its intriguing premise, the transition from interesting to tedious is incredibly fast. During the first few minutes of each stage you will strike down your subjects with ease, but the mechanics are so repetitive that it is impossible to feel any satisfaction. When things turn sour, you will start cursing and there is even the risk of forgetting your divine nature and utter some blasphemies of your own.

Tower defense games are so popular mostly because they are free and they can be played in browser during those few moments of free time that can’t be spent otherwise. Investing even as little as $10 for Babel Rising is not something that will appeal to many, because this game fails on so many levels that it is not even fun. I can’t spare more than two stars out of five for this title, but if you are hell-bent on experiencing a different type of tower defense game, take a look at this trailer.