Does The Poet’s Fire episode of The Following leave you with the impression that Joe is grooming Emma to take over?  I know I feel that way after watching the episode.  She seems to be in control of the rest of the group, at least what we have seen of it so far.  It also reinforces the “don’t trust anyone” theme that is playing through this twisted tale.

We know now that Rick prefers burning his victims to stabbing them, hence why he set the guy on fire that he did.  Of course, we also found out that the reason this guy was targeted was due to his bad review of Joe’s book.  In fact, Rick promised Joe he would get revenge on all the people Joe blamed for his problems that being the critic, the University Dean who denied Joe tenure, and Ryan Hardy himself.

The flashback scenes to Emma’s house give us even more insight to the relationship of these wanna-be serial killers, cause let’s face it they are learning from Joe right now.  Each time we get a little deeper into the lives of these people and see how they worked at the time.  Emma encouraging them to each have their own signature and praising Rick is interesting, at the same time with Jordy being admonished for copy-catting Joe’s eye ripping kills.  Plus we now see how Jacob and Paul were coerced into the “gay couple” thing to get close to Sarah. 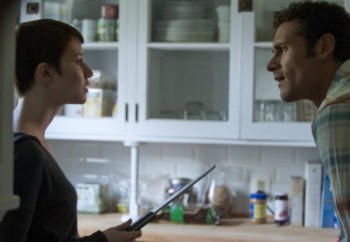 That knowledge lends to understanding of why Paul is having trouble with Emma and Jacob’s relationship, especially when it’s revealed that Paul and Jacob did eventually have something together without the prodding.  I’m not sure what made Paul do what he did when he kidnaped the girl from the convenience store but I’m sure it had something to do with needing power over someone else and Emma cutting him.  Of all of them she is turning out to be the most psychotic, but then again she is the second in charge and the only one any of them can get in contact with since Joe is in jail.

The one good thing about meeting Rick is Claire and Ryan now know that Joey will not be harmed since Rick bought all Joey’s favorite toys.  It doesn’t get them any closer to where he is but at least they know he is safe, for now.  They learn all this when they go to Rick’s house and his seemingly frightened wife, Maggie, tells them she has no idea about the charges and how her separated husband stabbed her when she asked for a divorce years ago.  That turns out to be false because we find out that Rick stabbed her to practice it, proclaimed he didn’t like stabbing, but went so deep that Maggie had to go to the hospital.  Apparently, Rick got over his aversion to stabbing since he killed the University Dean that way, watching as the life left the man’s eyes.

Debra talking to Jordy in the hospital, with a promise of him seeing Joe, lets us in on how no two people in Joe’s circle know what the entire plan is.  That way if one of them is captured, they can’t give away the others.  In his ignorance of who the FBI knows and doesn’t know is part of the group, Jordy tells Debra that he has no idea where Joey is, Emma and Maggie set that up.  Oops, now he’s gone and done it.  Maggie kills the agent who was protecting her in case Rick came back to the house after receiving a text that says “now”.  Debra feels extremely guilty about the death but I don’t think that puts her completely in the clear as one of Joe’s members just yet.   And what will they do now that Jordy has managed to commit suicide from his revelation? 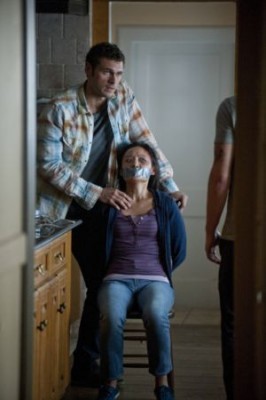 The dumbest thing that Ryan says in the entire episode is asking if the cult is limited to just the six they know about (before they find out about Maggie).  If there are nine different handwritings on the ceiling of Emma’s house how can there only be six in the cult?  I think the writers screwed that up royally.

Despite seeing more death this week, and about as shocking as in the first Following episode, the video sent to Claire at the end is even more disturbing.  Paul playing with Joey while Emma films it.  The pair are encouraging Joey to kill innocent creatures (a bug and a mouse) telling him it’s fun.  Claire and Ryan are horrified but having Joey say hi to Ryan (who he doesn’t even know) makes it personal.  Does this mean that Joe really believes Ryan is Joey’s father as was insinuated last episode and wants to torture both of them?  Only time will tell.