Pokemon Go isn’t all about collecting the Pokemon, the mobile game which is going wild also has two other elements to it right now which include the PokeStop and Pokemon Gym.  With a PokeStop you check in and get additional Pokeballs, Eggs and other random items, the higher your level the more variety of items you can find.  You can get revives, potions, and even raspberries from the Pokestop too.

Pokemon Gym’s are where you go to battle your Pokemon against opposing teams or train and gain prestige for your Gym if your team owns the gym.  But before I talk about training and battling, let me talk about how you prepare your Pokemon.

Pokemon have specific attributes which are critical to battling in Gym’s, these include their HP which is of course how much damage they can withstand, but also pay attention to their Type, because this is crucial to defeating your opponents in a gym.  CP which is Combat Power is a relative score and reflects how powerful the Pokemon is, the odd thing is it takes more into account than simply hit points and the ability damage that a Pokemon can do.  A Pokemon with less hitpoints, weaker abilities but higher combat power can still defeat a Pokemon that has more HP and does more damage, so CP does have an impact, think of it more like a level for your Pokemon, you may not see the hidden bonuses and benefits the Pokemon gets. 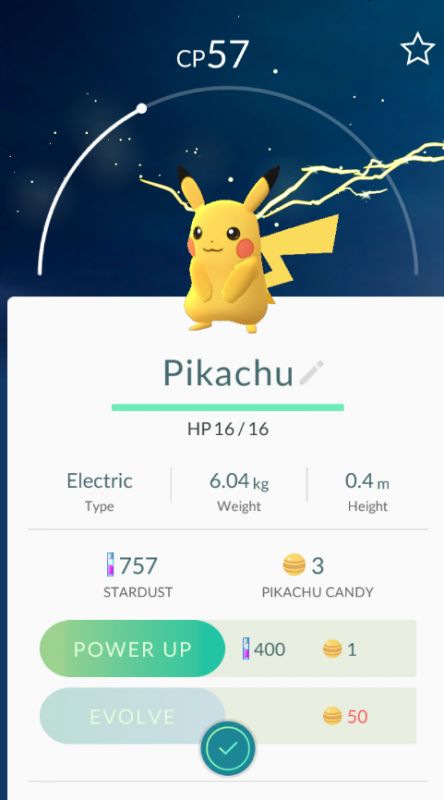 Combat Abilities makes a difference and as you collect Pokemon of the same type, look at the abilities the have.  I have 2 Ponyta below who are only 11CP difference and you can see one has Ember for 10 damage and Flame Charge for 20 damage as it’s special.  The other has Tackle for 12 damage and Flame Wheel for 35 damage as it’s second ability.  Always keep the Pokemon who have the most ability damage as the ones you Power Up to make sure your damage output is as high as possible. 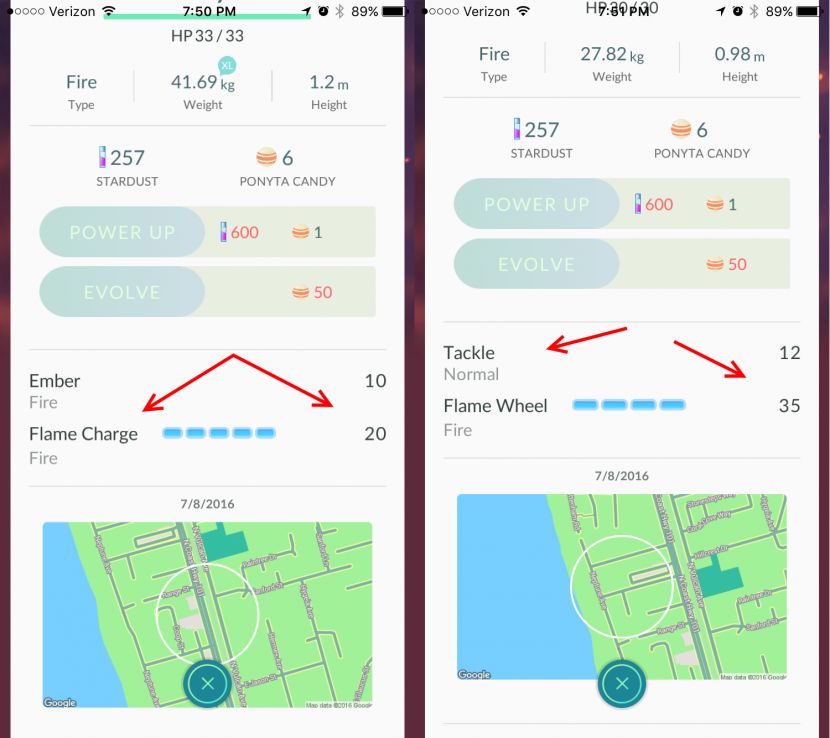 Secondly, in the second ability you will see blue bars or dots, these indicate how many charges you can store, or in the case of one big meter how long and many attacks you have to make before you can fill up your ability bar and use your special  combat ability.  I will go into 2nd ability in the combat portion in a bit. It is very possible to defeat Pokemon who are higher CP than your own, I would say give or take 200CP, I have had a 464CP Pokemon beat a 780CP before and some of this has to do with leveraging those ability damages and your Pokemon type.

Type is the element your Pokemon is, Fire, Water, Ground, Grass, Poison, Normal…etc.  There are many types, far more elements than the primary 4 most people think of (Air, Earth, Fire, Water).  Leveraging your Pokemon types in the Gym is how you really gain advantage against your opponent.  When fighting in a Pokemon Gym against other players, you always get to have a set of 6 Pokemon that you combat with.  This is your fighting 6, and you get to pick and choose which 6 to put in your line up.  You even get to switch Pokemon in the middle of a battle and put another one in your line up in place.  This is where you need to learn which Pokemon types do double damage against which other types, this can help you further maximize your damage output against other Pokemon and knowing that your water Pokemon does 2x damage against a Fire Pokemon is crucial to beating Pokemon that are a higher CP than your own.  There is an excellent Pokemon type chart that can be found here: http://pokemondb.net/type I am reprinting it, but the chart is interactive and you can click on it and get more details about each element chart, so make sure you visit.

Knowing that a flying Pokemon suffers 0 damage a Ground Pokemon is key to when you see Golem rocking a Gym.  Note whenever you see your attack say “Not Effective” switch out your Pokemon immediately in combat for one that at least does normal or is Very Effective or you are just going to waste your Pokemon HP.  When you lose all 6 Pokemon in a Pokemon Gym it costs a lot of Revive and Potions to boost their HP back to max and you can drain your inventory quickly.

So a Pokemon Gym usually will take your top 6 CP Pokemon and make them your default fighters, this is why you really should have a lot of element variety in your top CP Pokemon, don’t level up all one element type.  In my case below I have too many flyers, but I evolved a Pidget to that Pidgeot and didn’t put Stardust into Power Up for it.  Poison is a good type to have, and Grass is very effective at many Elements to. 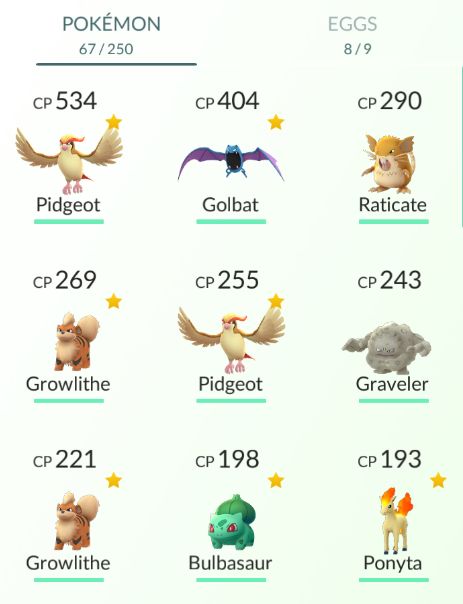 Normal is one of the Pokemon types that are only vulnerable to Fighting Pokemon.  They are also excellent at combating Ghost Pokemon like Ghastly, though Ghastly is also Poison.  A Pokemon that has 2 types is vulnerable to the same thing both types would be vulnerable to, but also is as effective as having both types as well, so use them wisely. 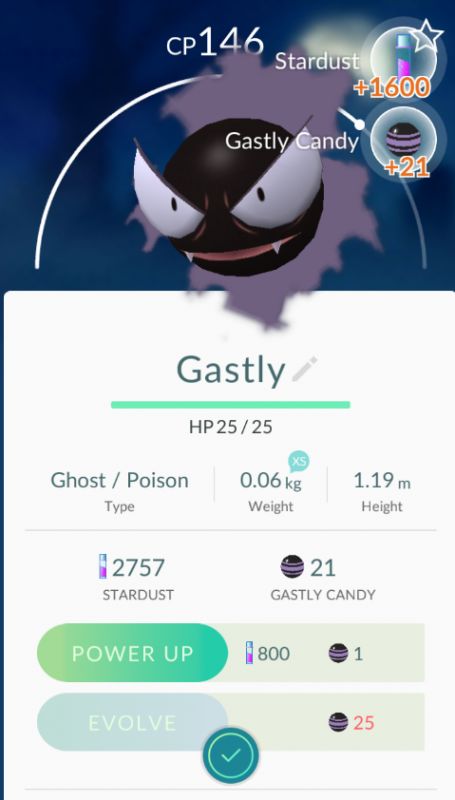 The Gym has levels, and the more levels the Gym has the more Pokemon can be stationed at the Gym, for a Gym that you own this may mean more of your own team can leave guard Pokemon there.  But for enemy team Pokemon Gyms this means you may have to battle more opponents and have to repeat the battle a few times as when you fight in a Gym and win, you are decreasing the prestige that the Gym has.  When the Prestige is lowered to 0 the Gym is unclaimed until a Pokemon is placed in it to guard.  You get huge XP boosts for owning a Gym for your team, and you gain XP from fighting other Pokemon and defeating them. You can become a Pokemon Gym leader by leveraging types even if your CP is lower, remember you get to fight a gym with 6 Pokemon so usually as long as you have a variety of Pokemon and your CP is around 200 difference you can take a gym.  Just know the more opponents you have to defeat the more you may end up having to revive your Pokemon and keep battling and taking one opponent down at a time, you must defeat at least 1 opponent in order to cause a gym to start losing prestige so you can take it over.  I have successfully defeated 3 Pokemon with a single Pokemon who was lower CP than all 3 before, but it was luck in this case and the Gym had too many ground Pokemon defending with my Pidgeot having a clear advantage. 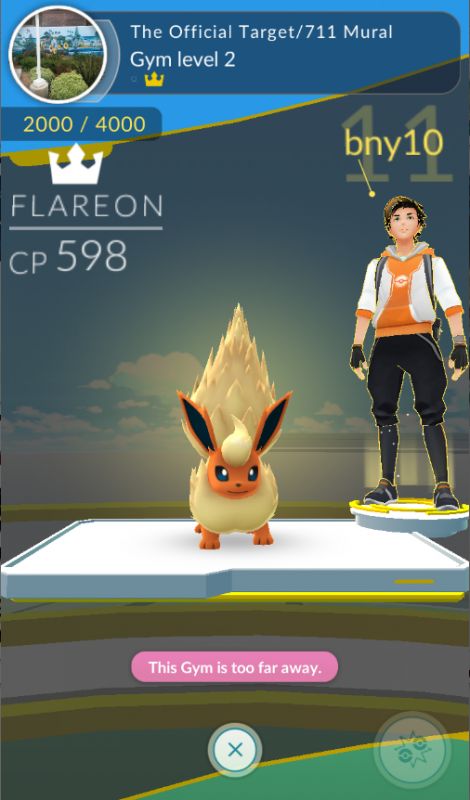 If your team already owns a Gym, like you are team Mystic and Mystic owns the gym, then instead of battling other Pokemon to remove Prestige from the other team, you are training your Pokemon in one on one fights and gaining prestige for your gym.  Each victory will increase prestige for your Gym and help level it up, leveling up the Gym increases how many others can leave defenders, but you can’t leave more than 1 Pokemon at a Gym to defend it.  But each Gym you leave a Pokemon at, you will unlock the shield symbol in the Store. 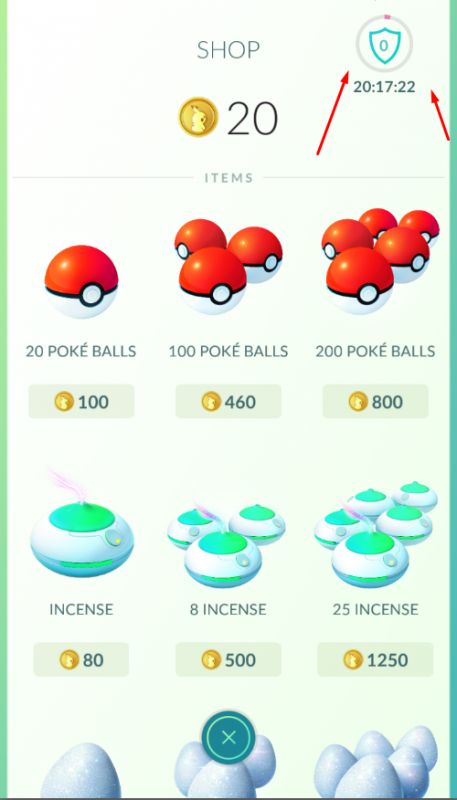 Every day you get to collect gold and Stardust from each Gym you are stationed at, right now I have never owned more than 1 gym, and it appears no matter what Prestige Level the gym is at, you only get 10GP per day from each gym that you are stationed at.  So you would have to have stations at 10 gyms to get 100GP in one day.  You also get Stardust to power up your Pokemon as well, which helps you Power Up your Pokemon faster.

With a relatively weak 404CP Pokemon now owning my local Gym, I use these tips and others to conquer gyms and collect my daily Gold Coins which give me the benefits of getting items from the Pokemon GO store without having to spend any real world currency.

Tell me your Pokemon GO Gym battle stories, have you taken over any Gym’s lately, do you own them for more than 1 day in a row or are you overtaken quickly?