This is a review of the Xiaomi Mi Band 2 which is a smart band or fitness band and has a very specific set of functions for tracking your steps, heart rate and more.  It is not a full smartwatch and doesn’t get compared against full featured smartwatches.  I have reviewed the Mi Band 1S from Xiaomi and this watch has identical functionality except the Mi Band 2 has an LCD screen and can show you the time, steps, estimated calories burned and remaining battery which is something the Mi Band 1S cannot do because it has no screen face.

So really let me break the review out into two pieces, and I combine showing both in the video above.  The Xiaomi Mi Band 2 watch itself and then the Mii Fit app.

The Xiaomi Mi Band 2 has a face that is nearly identical to the Veryfit 2 (ID 107) bracelet which I reviewed.  This is an oval face about 1.5″ in length (just under) and it fits comfortable on the wrist.  It gets inset into a silicone band which has a bunch of holes and adjusts easily for a variety of wrist sizes.  You have to take it out of the band to charge it, but it slips out and back in with ease. 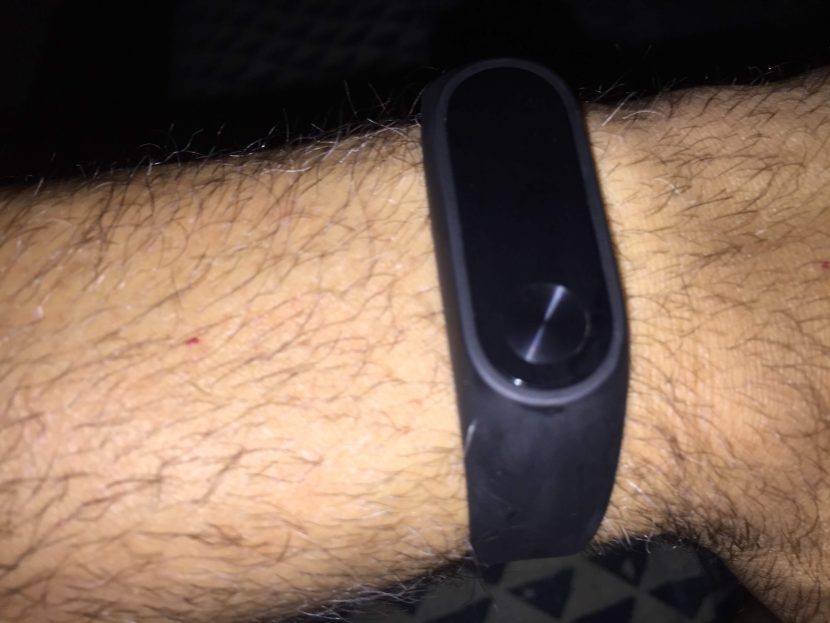 The battery life on the Xiaomi Mi Band 2 is the most impressive out of any fit band I have reviewed, it easily lasted 9 days on a single charge and this is in part due to its limitation that it isn’t actively monitoring the heart rate all day long.  This turns out to be one of the biggest drawbacks of the Mi Band 2 which is the same limitation of the Mi Band 1S in that it will only read your heart rate when you press the button or use the app to deliberately trigger it to read your heart rate.  Combine this with the fact that you have to hold your arm up with your arm bent across your chest or there is a good chance you will get an X and a bad read on the watch make this the only major frustrating thing about the watch.  I like a watch that monitors my heartbeat all day long, not just when I want to see what it is and have to remember to check it.  Also due to the obtrusive way you have to check your heartbeat you literally have to pause what you were doing and stand still to do a check.  On my wife’s smaller wrist this watch had a huge problem accurately reading her heartbeat and it is even less likely to get a read if you are laying down. 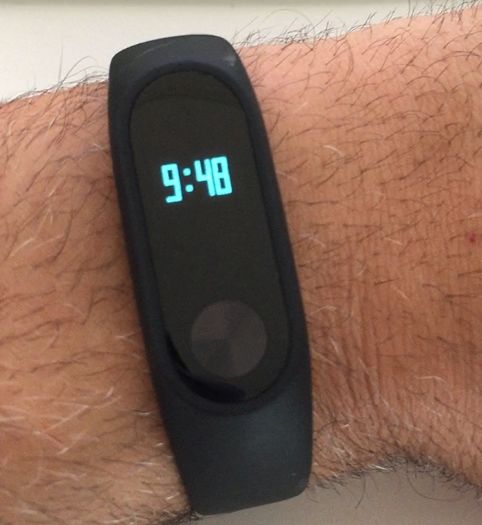 The Xiaomi Mi Band 2 is an improvement over the original Mi Band 1s in that it has a display that shows time, steps, heart rate, calories burned and battery life.  The Mi Band 2 will not show any calling data, SNS notifications on the screen, though will vibrate with notifications if you have it setup to do so.  It will do vibrating alarms to wake you up silently as well as does a good job tracking sleep data and syncing it with iOS or Android devices. The silicon band is fairly comfortable and have worn it for weeks non-stop with no issue with redness or irritation of the skin. I have also showered with it on fairly often and it is more waterproof than the ID107 bracelet which gave out under water. 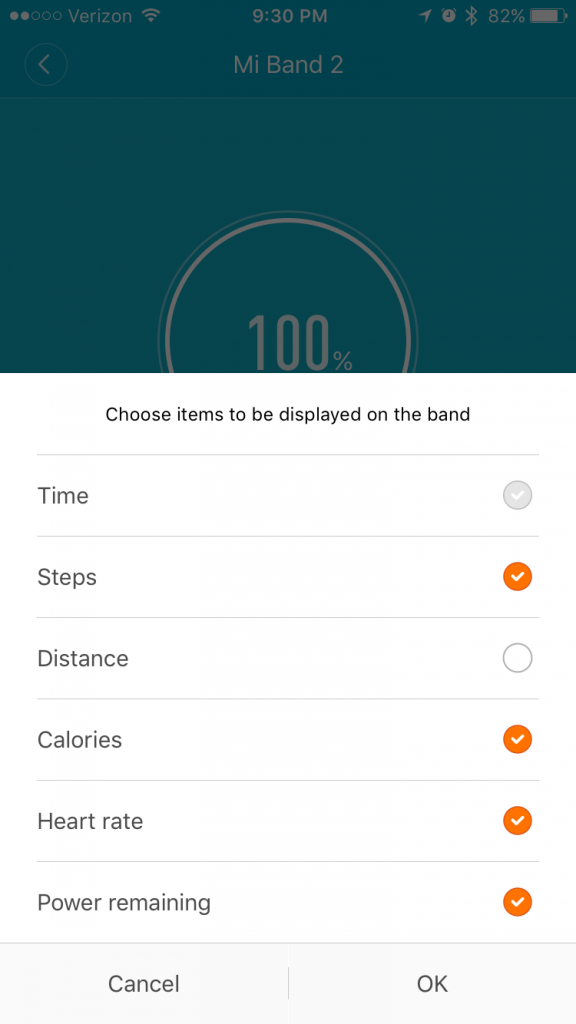 As you can see you can customize what you see on the Mii Band with the Mi Fit app, like you can have it not show power remaining or the distance if you don’t 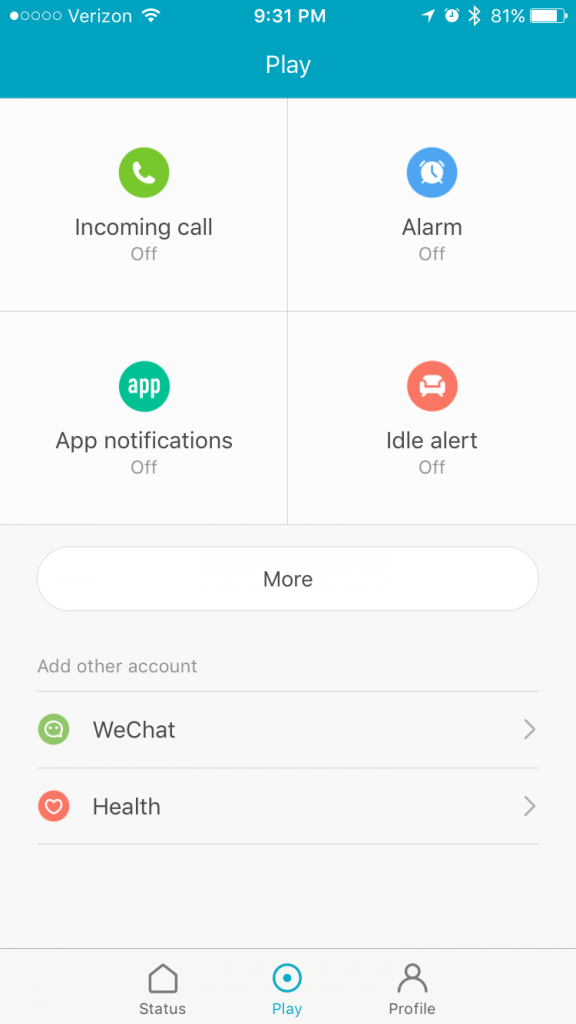 You can set vibration alerts for incoming calls, app notifications, idle (when you aren’t moving for a period of time) and even app notifications.  You can further isolate to SMS, Email DND and Goals.  Now remember in this watch you are only getting vibration alerts only when those notifications come in, this watch cannot display anything like caller ID, emails, texts…etc.  It only has the basic screens seen in the first option, so this watch is a fitness tracking watch, not a smart watch and know you can’t see Caller ID on the watch, only vibration to let you know your phone is ringing. 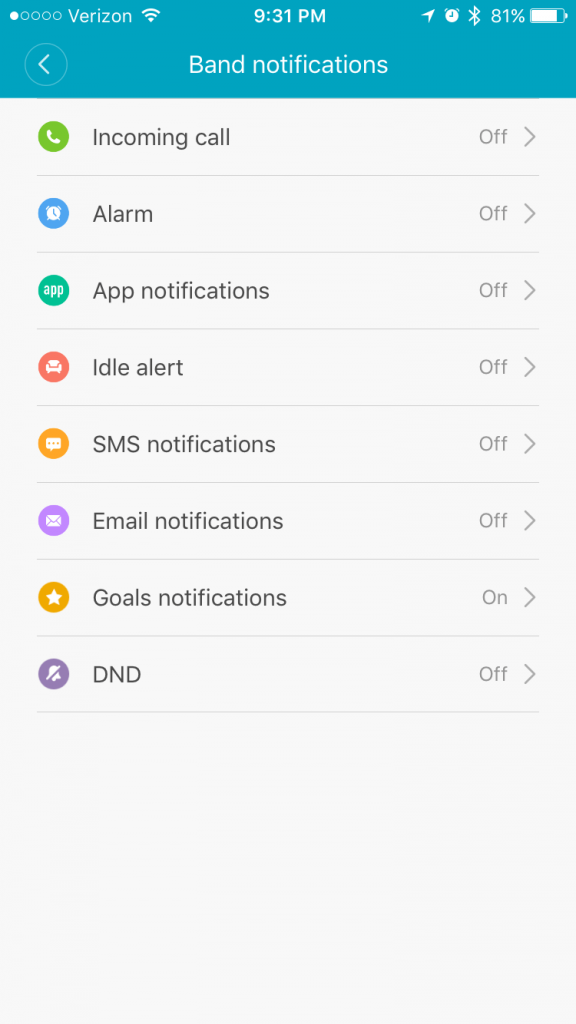 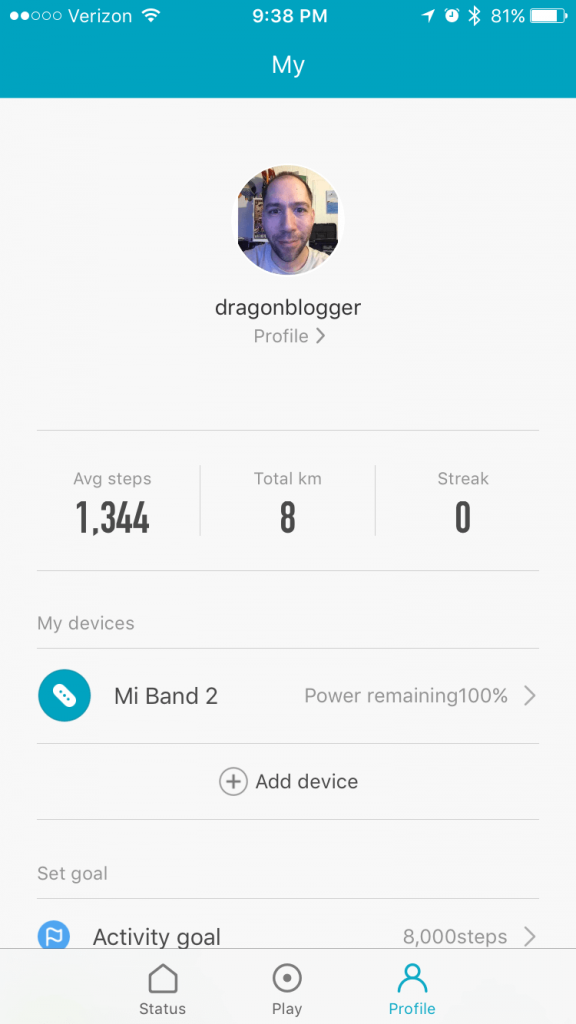 You can set activity goals like how many steps you want to take per day, I am using 8,000 as my current goal.  When you reach your goal you will get a little recognition vibration and symbol showing you reached your daily goal.

Overall the Sleep Data portion tracks much better than the VeryFit 2 smartwatch and it does a good job tracking and syncing steps however, and it won’t count steps while you are driving from my testing, it only counts walking steps.  Overall at the price, the watch has a longer battery life and better syncing of sleep data than the ID107 smart bracelet, but the ID107 had better heart rate reading. My only recommendations for improvement on the Xiaomi Mi Band 2 would be on the heart rate monitor, it should be able to monitor passively all the time as an option and have a faster read/more accuracy picking up without having to hold your hand in a specific position.

I didn’t notice but when you use the silent alarm and you tap it, it will put the alarm into “snooze” mode and trigger 10 minutes later, the watch will only turn off alarm mode if you actually get up, so you will want to turn off your alarm if you set a daily alarm and don’t want to have to be forced out of bed.  I had my alarm triggered on Sunday at 5am thinking I could just turn it off, but it keept going into sleep mode, and having to go into my phone app to disable the alarm made it not worth going back to bed.  So this is a good way to basically force you to get up since you can’t simply swipe your phone and shut off the alarm for good, it will detect you are still laying down and bug you again.