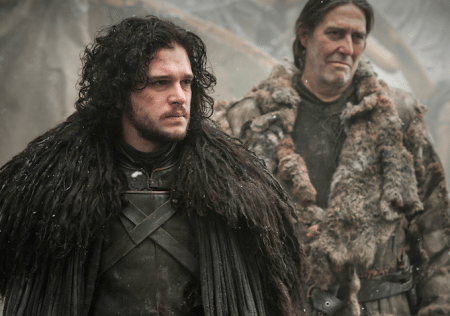 Game of Thrones is now over and my sadness sets in as we have to wait until next year for more new episodes. This is the longest episode so far, and it did not disappoint.  My finale party was a hit with great friends and great food. Time to recap the great moments and the sadness.  Reminder this post is full of spoilers.

We start with Jon walking beyond the wall into the forest where he is going to go see Mance Rayder.   The Wildlings surround him and he goes into the tent to meet with him. He tells him he is there to negotiate, Mance asks about Ygritte and Mag the Mighty, King of the Giants. He shows compassion and they toast to those who have fallen. Mance tells Jon he that enough people have died and all he wants is to lead the Wildlings through the Wall to safety from the Others and promises that no one else needs to die, but if they refuse then he will have no choice but to kill them all. 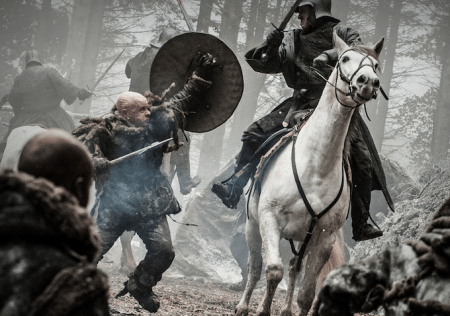 Just as their meeting is heating up and Jon reaches for a blade they are interrupted by the noise of thousands of men on horses. A huge army is starting to attack the forest from both sides.  Mance looks at Jon thinking its them trying to attack but Jon also very confused tells them its not them as they don’t have enough men.  I liked the overhead camera views they used to show the attack coming from both sides for the attack. As I haven’t read the books I was also confused as to who it was. 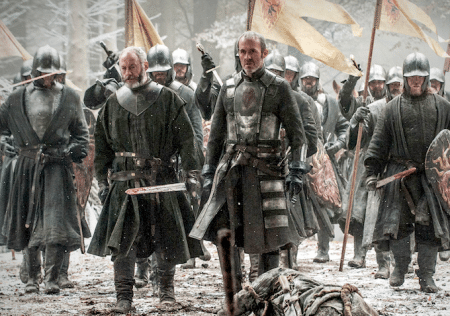 As the Wildlings die Mance yells for them to stop. There is Stannis and Davos with his newly bought army.  They question why a crow is with the Wildlings and Jon reveals who he is.  Stannis was a friend of Ned and asks Jon what should be done with Mance. He tells him to take him prisoner, sparring his life as he was shown when he was captive by them before, this is what his father would have done. Stannis takes his advice and takes Mance prisoner.

Back to Castle Black, the Night’s Watch are starting to burn their dead. Jon sees Melisandre watching him through the flames. After a few harsh words with Tormund, Jon takes Ygritte’s body beyond the Wall where she belongs and burns her himself. 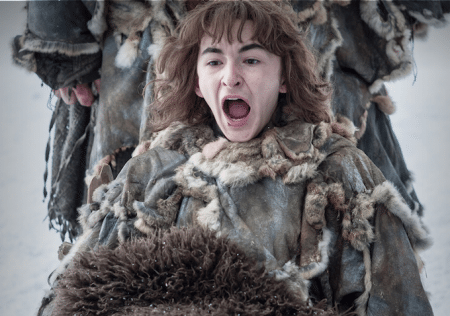 near Winterfell, Bran, Hodor, Meera and Jojen are about to reach the Three-Eyed Raven when they are attacked by crazy skeleton White Walkers. This was a big wtf moment. Even the book readers that were at my party had no clue as they assumed it was regular white walkers that attacked, but it was still very cool. Bran is forced to warg into Hodor again to start fighting them off.  An arm of a skeleton was stabbing  Jojen repeatedly and he is killed just before the arrival of a Child of the Forest.

Bran, Hodor, and Meera take shelter inside a cave beneath the enormous weirwood tree, where the Walkers cannot enter. The Child leads them to the base, through the caves and vines of the great tree. There is an ancient man who appears to have grown into the roots. He says that Jojen died so that Bran could find what he has lost. Bran asks if  he will be able to walk again. The elder man says “You will never walk again, but you will fly.” 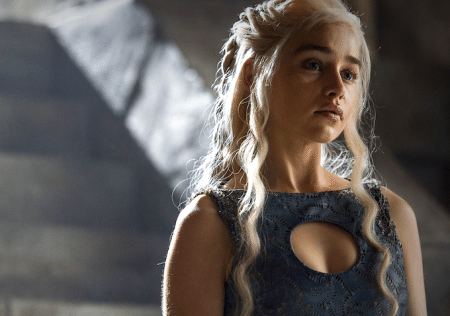 In Meereen, Dany is speaking with an elderly man who wishes to sell himself back to his former master. Shocked and dismayed, Dany allows him to do so on a yearly basis.  Ser Barristan warns her that the masters will take advantage of this.

Things turn from bad to worse when the next man enters, cradling a bundle. The man is crying and barley able to speak but manages to say “He came from the sky, the black one, the winged shadow.”

The man lays down his bundle and reveals the charred skeleton of his 3 year old daughter.  She was burned by Dany’s dragon Drogon.  Drogon also seems to be missing and hasn’t been seen for 3 days.  The Mother of Dragons and Breaker of Chains seems to have no choice for the moment but to imprisons Viserion and Rheagal in the catacombs. Mt heart was breaking for the poor dragons as they yelled out to Dany as she walked away like a baby calling for their mommy.  For me this was the most heart breaking part of the episode. 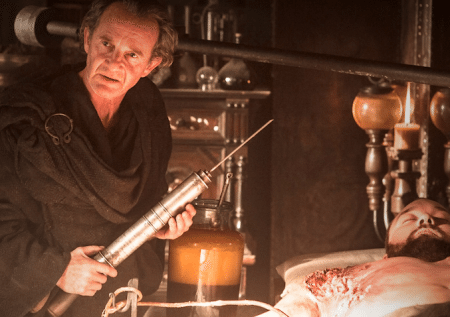 Back in King’s Landing, Cersei watches former Maester Qyburn begin his attempt to save The Mountain, Gregor Clegane from his massive and smelly wounds as he is dying from Oberyn Martell’s poison that was on his spear.  Maester Pycelle insists there is nothing that can be done. Cercei is not satisfied with that and relives Pycelle of his duties.  Qyburn tells Cersei “The process may. . . change him somewhat.”  “Will it weaken him?” she asks. “Oh, no,” Qyburn assures her.  This scares me a bit as he is already massive, strong and mean. What will happen that will change him? It can’t be good either way.

Cersei goes to visit her father, Tywin anf tells him that she will not marry Loras Tyrell.  He is starting to insists that she will, but Cersei is yelling she will not  leave Tommen with Tywin and Margaery alone, and threatens to tell everyone “the truth.”

Tywin looking confused actually has no idea what she is talking about.  Cersei tells him, “We were right there in front of you, and you didn’t see us,” she says. “Everything they say is true about Jaime and me. Your legacy is a lie.” Tywin refuses to believe her.

Cersei goes into another room where Jamie is reading.  They argue a bit about Tyrion and then Cersei starts being all sexual and throwing herself at Jamie saying she chooses him and doesn’t care what anyone thinks.  She kisses his gold hand and they start making out. 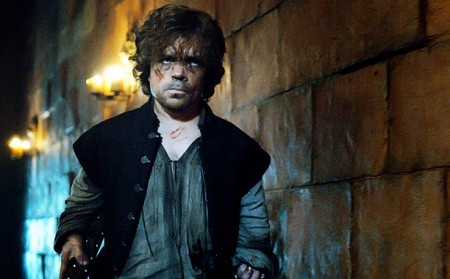 After nightfall Jamie goes down to the cell to see Tyrion. His death is supposed to happen the next day but Jamie is here to help him escape.  He takes him through a hallway and tells him where he needs to go. The kingslayer brothers share a brief moment in a hug and Jamie gives his brother a kiss goodbye.  As Tyrion looks up the stairs, he changes his mind and goes a different way.

Tyrion ends up in Tywin’s chambers. As he sneaks up in his loud shoes expecting to find his dad, instead he finds Shae in Tywin’s bed, and she thinks it is Tywin walking into bed and she calls him her Lion. After a moment of mutual frozen horror, the two wrestle a bit.  Tyrion finally strangles Shae to death with her own necklace. “I’m sorry,” he says, with tears in his eyes. 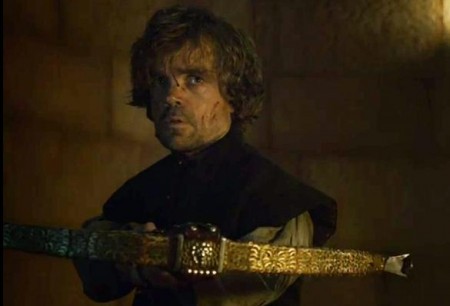 Tyrion takes a crossbow and begins to look for Tywin, who is on the privy. Tywin repeatedly tries to gain power in the conversation,  promising that he would never have let Tyrion die, no matter how much he hates him and repeatedly calls him his son. But after one too many references to whores, Tyrion shoots Tywin with the bow. Irritated at being shot Tywin claims that Tyrion is no son of his. “I am your son. I have always been your son,” Tyrion says as shoots his father again, and leaves Tywin Lannister to die on a throne of sorts.

Tyrion now needing a friend and a way out heads to Lord Varys.  He agrees to help him and hides Tyrion in a large crate and takes him to the docks. As Varys looks back at King’s Landing,  the bells have begun to toll. I guess he figures the Lannisters are finished now and decides to take a seat on the ship next to the crate with Tyrion. On a side note I love their friendship. 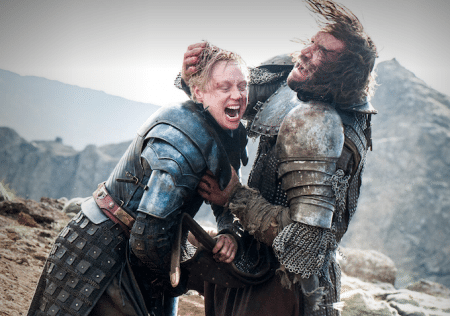 Ten miles from the Vale, Arya is practicing her sword movements and the Hound who is taking a dump are confronted by Brienne and Podrick. After a massive and slightly deliberate misunderstanding about which of them can best protect Arya. Brienne and Clegane begin to fight and beat each other to a pulp. The hound falls from a cliff to end their fight. Brienne and Podrick arecalling for Arya who is hiding in the rocks.

As they head in a different direction to look for her Arya makes her way to Clegane and he tells her he is going to die unless there is a Maester around the rock. 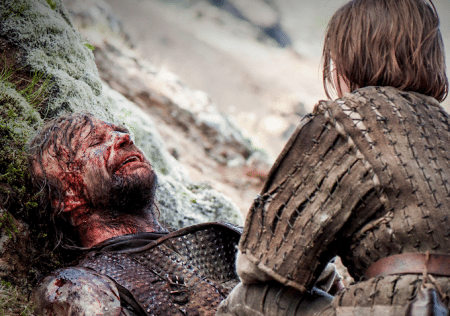 “You remember where the heart is?” he says, and she nods. The Hound says he’s ready to die and she can cross another name off her list, but Arya only stares at him. Clegane goads her, reminding her of Mycah the butcher’s boy, and saying he wishes he had raped Sansa during the Blackwater. He is now looking desperate and begins to beg for her to kill him.

Arya kneels but instead of killing she just takes his pouch of coin, and walks off, refusing to give Clegane the gift of mercy. She rides off and can see the salt ship being loaded up. She speaks with the captain asking if he can take her North and offers to pay for her passage and is willing to work. The captain tells her they are not going that way but that they are headed to Braavos.  She hands the captain Jaquen H’gar’s iron coin and says the words “Valar Morgulis.” The captain takes her coin and heads her to the ship.

It was a great episode overall and I can not wait to see what happens next season. Its a long time to wait and will not happen fast enough. What did you think of last nights finale episode?  Thanks for joining me on the recaps this season and look forward to sharing with you all again next season.