The latest generation Red Magic gaming smartphone is here and it is eye popping just how many features and power they managed to cram into this gaming smartphone.  The Red Magic 6 which just launched sports the Qualcomm® Snapdragon™ 888 and Kryo™ 680 Arm Cortex-X1·CPU processors with an up to 25% higher performance Adreno™ 660·GPU for what they claim is up to 35% faster graphics rendering compared to this GPU used in other smart phones.  This is a beast of a phone that also uses incredibly fast 12GB of LPDDR5 RAM which is 1.5 times faster than LPDDR4X and has an I/O bandwidth of 5500Mbps and up to 44GB/s throughput.  This means you get 50% more speed and less power consumption (approximately 20% less) compared to the previous generation of Red Magic gaming smart phone.

The UFS 3.1 storage on the Red Magic 6 also supports HS-G4 specs, and has a single-channel bandwidth of up to 11.6Gbps which is 2x faster than UFS 2.1.  You can install and run the most powerful mobile games at much faster speeds than other smart phones, and you have 3 new features in UFS 3.1 including write enhancer, deep sleep and performance tuning notifications.  This phone knows that mobile gaming needs fast Internet and so it is equipped with Wi-Fi 6E support at up to 3.5Gbps speeds (like anyone has that fast Internet) and it even supports 5G if you have 5G in your area. You also get Bluetooth 5.1 support as well.

The screen boasts an incredible 165Hz 6.8 inch FHD+AMOLED screeen with up to 500Hz touch refresh rate, this is incredible in a smartphone and truly makes this an ideal smartphone for professional mobile gaming, no longer do you need to be a PC or Console gamer to be a big time game streamer or competitive gamer, there are plenty of mobile gaming platforms like PUBG Mobile and others where you can really shine with this phone.  The phone also features a large single cell 5050mAh battery that supports 66W charging and Fast charge, this is incredible charging speed and if you buy the 66W charger, it can go from 0-100% charge in 43 minutes, but the included 30W charger will do 0-100% batter in 65 minutes. 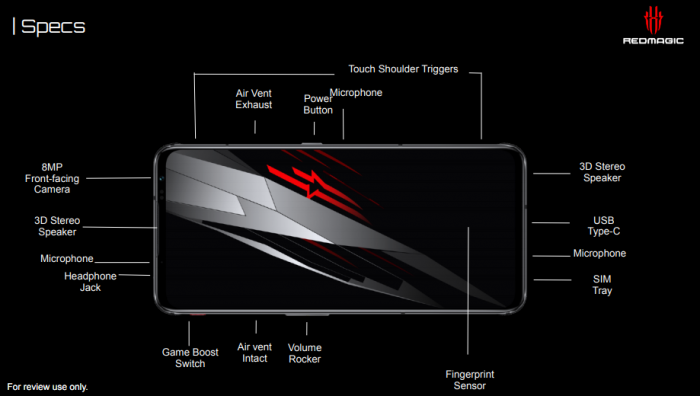 The phone uses Type C and has 3 microphones if you can believe it, as well as 3D Stereo speaker on both sides of the phone.  It does still sport a traditional headset jack, and is DTS Ultra X capable.  There is the 6th generation of ultra-thin Screen Fingerprint which can read and unlock the phone much faster than almost any other phone on the market.  The Red Magic 6 also has 3 rear facing (64 MegaPixel, 8 MegaPixel wide and 2 MegaPixel Bokeh) and a single 8MP front facing camera.  These camera’s boast wonderful shots even in low light vision and excellent macro shooting support.

As far as gaming is concerned, this gaming smartphone sports capacitive touch shoulder triggers with 400Hz touch sampling rate and improved anti-interference, this means you get 8.3ms response times and shoulder trigger support exists for Genshin Impact, Fortnite and League of Legends Wild Rift just to name a few games.  Now as far as the touch screen is concerned, you have 500Hz single finger support and 360Hz multi-finger touch sampling for ultra-responsive touch sensitivity.  8ms response times allow your reactions and movements to be faster in game.

Now all that power and gaming could come at a high heat cost, but the Red Magic 6 leverages a combination of 7 cooling technologies to keep CPU Core Temps up to 16°C lower.

The first is their built-in Centrifugal Turbofan which has up to 20k RPM, which is 20% faster than previous generations.  It also is only 28dB and uses a brushless motor, it is both energy saving and silent.  There are 59 fan blades as thin as .01mm and the max speed at the end of the fan blades is 14m/s. Another cooling factor is the multiple layers of Graphite, there is a graphene sheet on the back cover that has a high thermal conductivity of 400W/mK and a large area of 3600 square millimeters, which greatly enhances the reliability and thermal conductivity of the graphene sheet. This further disperses heat away from the chipset area. You have Vapor Cooling liquid cooling which is as thin as .33mm transfering the heat away from the CPU as well.

Now exclusive to the Red Magic 6 Pro is Aviation-Grade Aluminium with a conductivity of 200W/(mK) and the total area of the rear metal cover is 18,000 square millimeters. This one has thermal conductivity is increased by 71 times compared with Red Magic 5G.

Bottom line, if you are looking for the ultimate gaming smartphone and mobile gaming is your thing, then check out the RedMagic 6 Series Today! 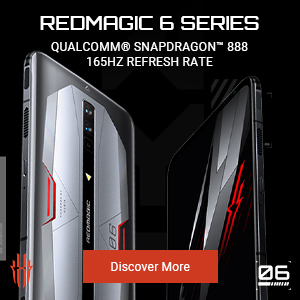