There’s a reason why “play” has always been the verb associated with video games. Yes, in part this is because the medium is interactive in a way that books, television and film will never be. Greater than that however is the fact that at their core video games have always been about a pure kick to the pleasure centers. They were never planned as a tool for broadening your mind or creating a discussion about global social issues. Some may have been attempted to accomplish both of those goals and while that’s admirable, the core of video games comes down to sheer entertainment. 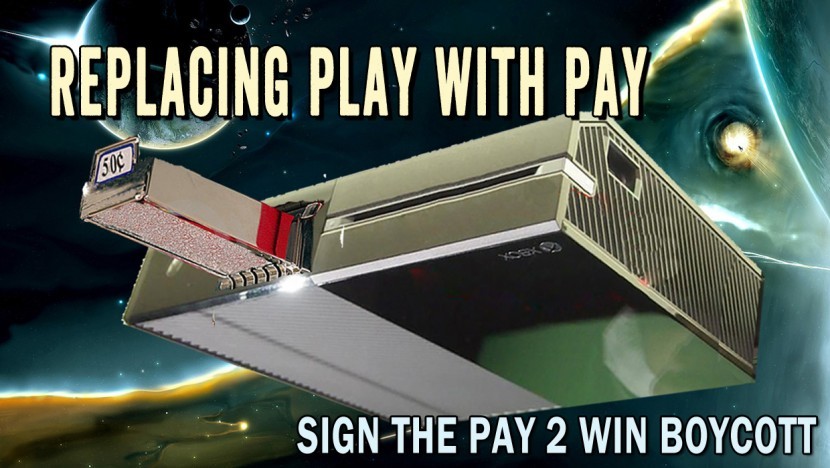 Microtransactions at their worst alter the focus of development and design away from pure entertainment and towards a paradigm centered on maximizing capital, a shift that not only alters the fundamental nature of what a video game is, but also squanders a number of opportunities to make games more fun and engaging, some of them with roots that go back to the hey days of video games.

To that extent, cheat codes have always been a vibrant part of the video game experience. Whether you used them to get past a particularly brutal level or simply to experiment with previously untenable strategies or goals pushing a few buttons and becoming invincible or kitted out with the optimum equipment has always been a huge appeal to gamers. Completing a game with skill alone is dinner and mucking around in the sandbox with impunity is dessert.

Pay-to-win removes that option from a single player experience. We’ve all seen the games that were free and offered endless hours of gameplay. Unfortunately they fail to expound on the harsh truth that the endless hours are there because accumulating the necessary resources to upgrade your equipment requires a Sisyphean grind. I don’t mind paying money for an enjoyable experience. It doesn’t even have to last for weeks if it’s fun enough. Not putting the costs upfront prevents developers from including features that truly serve to make the game more fun like cheat codes. I fully understand the merits of capitalism, but at a certain point the need for profit must be weighed against the benefits of delivering a quality product to the consumer. Game franchises like Grand Theft Auto have always had cheat codes as a central aspect of their appeal; how many gamers have bought these games with the sole purpose of utilizing cheat codes to cause riotous mayhem?

By focusing on leveraging micropayments and small transactions developers are wasting a golden opportunity to get people genuinely interested in video games. There are powerful mobile devices in the hands of millions of people and with things that were previously considered the sole domain of nerds gaining popularity there is a burgeoning market for high quality mobile games that is going untapped. The best gameplay experiences are being manufactured by smaller studios that don’t have the same massive resources and pool of talent as the heavy hitters of the industry who have been dipping their toes into the water. If a company like EA or Square took a page from the books of smaller indie developers and made something truly designed to sell not because of some calculation or slot machine style reward scheme, mobile gaming could truly become a force of its own.

If it were a trend that was limited to mobile gaming we might be satisfied simply to warn people away from games or developers that leveraged In-App Purchases. Unfortunately this insidious trend is spreading. Many gamers are turning away in disgust from games that require an endless stream of cash for success, myself included.

What’s truly scary, however, when it come the recent foray of micropayments into core gaming is that the choice of what is made and what is not, was taken away from the average gamer in mobile gaming, and it is entirely possible that this same phenomenon could transpire in gaming across the board.

A recent study performed by mobile marketing firm, Swrve, however, showed that of everyone who downloads mobile games a miniscule 1.5% of them purchase nearly everything available. While you’d think that logically the rest of the money being spent in mobile games would come from the other 98.5% who maybe buy one or two items. In truth the statistics are far more bizarre. Of that thin slice of the overall pie of 1.5%, there’s a segment of .15% of mobile game users who are responsible for 50% of all in-app purchases. Capitalism is largely considered a cousin of democracy wherein the will of the people is made known by their allocation of funds. However in mobile gaming, a very small minority are pushing an agenda which the vast majority doesn’t want.

If you yourself have come to recognize the danger of this trend, join us in making our voices heard and join our boycott.

Until big developers look at mobile and tablet gaming as something more than an easily milked cash cow and truly put in effort trying to make a product that’ll have you recommending games to your friends and family, I will be ignoring anything that doesn’t come with an upfront price tag. As for the recent glut of PC and console games that are absolutely laden with IAPs, you should leave them lying on the shelf untouched, because the more the masses join in the small segment that is willing to fork over endless amounts of money to enjoy themselves, the more developers will charge for every tweak, skin, upgrade and cheat code that makes “play” an appropriate verb to use.

You can sign the Pay to Win Boycott by going here >>>

Growing up in a rural town left plenty of time for Hardcore Droid staff writer, Will McCool to play video games, which he has been doing nonstop since the days of the Nintendo. Now living in a far bigger town (a city, really) he still spends plenty of time parked on the couch playing video games with his wife. On other days he writes, explores the marvels that the world has to offer and plans how best to clear zombies out of an urban area.