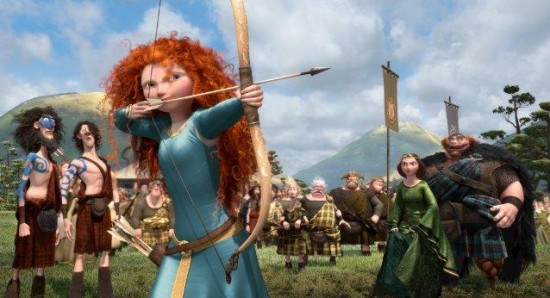 Have you forgiven Pixar yet for Cars 2? Perhaps a girl with red, untamed locks will help you change your mind. Brave is Pixar’s latest CG adventure to hit the big screen, and if you were disappointed by the studio’s 2011 poor vehicular outing, then consider this a peace offering. There is a caveat, however: You need to be patient at the beginning of the film; it’s not immediately apparent that you’re in for a treat.

Sure, the film is utterly gorgeous, perhaps more so than other Pixar films. Princess Merida (Kelly Macdonald), the heroine, with her amazing untamed and flaming-red hair which looks almost life like. Everything, from the fields and forests of medieval Scotland to the way each arrow flies through the air, is visually breathtaking. Alas, the films visual splendor can only hold one’s attention for so long, especially when the film starts off like so many other animated films, with the main character trying desperately to break out of the confines of her current lifestyle. Unbeknown to her father, Fergus (Billy Connolly) Merida wants to find her own way in life. Turning to magic, she accidentally unleashes a beastly curse on the land and chaos ensues.

If you can get past the initial cliche, however, Brave will reward you for sticking around. Merida’s rebellion leads her to an encounter with a witch, who casts a spell to alter her fate. Like all movie spells—and the wishes that motivate them—this one causes an unexpectedly bad outcome.

This is when it starts getting really interesting.

We’ll try not to give too much away at this point, but it becomes apparent that the rather slow beginning was actually crucial as it helps establish the characters and explains their relationships with each other. As the story unfolds, the film grows in complexity and becomes more entertaining. Yes, Brave remains a family-friendly film in some ways, but beyond the slapstick and burp jokes, there is depth here that isn’t commonly seen in a CG movie marketed towards children. It’s different from the usual pulling of the heart-strings of Toy Story pictures, something that’s more mature. This isn’t some two-bit laugh-a-minute flick starring talking animals that spout one-liners. It’s a tale about a mother and daughter coming to terms with each other’s differences, the take home message being that parents don’t always know what’s best for their children.

By the time the credits roll, viewers will most likely agree that Pixar is back, its almost like Cars 2 never existed. Brave is funny, exhilarating, well-characterised and moving. In fact, with Brave, it seems like the studio is trudging on new ground. Yes, Pixar still makes CG movies aimed at kids, but its films have evolved into something more personal and grown-up, just like its audience. Make no mistake, Brave is still a Pixar film with all the Disney trappings, but if you look more closely, you’ll realize there’s something special here. Something brave.

This review was brought to you by Michael, Michael is a huge movie enthusiast and a content writer on movies.com.au.