Okay, you don’t go into the theater to watch a movie like Cats & Dogs: The Revenge of Kitty Galore without checking both logic, reason and believability at the door.  With that being said the sequel to the 2001 movie Cats & Dogs is more entertaining and has many more puns and spoofs than the original film did.  The movie is about canines and felines leading double lives as secret agents who keep the world safe unbeknownst to human beings.

The movie lampoons most obviously James Bond, but you will see spoofs of Lethal Weapon, Silence of the Lambs, The Terminator and even the Tim Burton Batman movie with Jack Nicholson as the Joker. 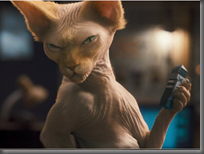 The movie stars Bette Midler who does a fantastic job voicing Kitty Galore a most evil feline bent on taking over the world and seeking revenge against dogs and cats.  One of the funniest parts of the film is the pet albino mouse that she is constantly toying with and torturing in her possession.  The cat itself is just wonderfully hideous to look at and you can’t help but gaze and think how can that really be a cat species.  (The sphinx is one of the more exotic cat species).

The heroes of the movie are Butch and Diggs who are voiced by Nick Nolte and James Marsden respectively.  Both dogs are canine agents out to stop Kitty Galore and to do so are forced to team up with Catherine a cat voiced by Christina Applegate.

The movie is all absurdity as the animals are on the trail but always one step behind Kitty early on.  They team up with a pigeon named Seamus and the movie laughably puns the stupidity of pigeons repeatedly throughout the film.

Most of the dogs in the film are recurring roles from the first movie even though the voice actors are not in most cases.  Lou the beloved beagle is now in charge of the Dog HQ and of course Butch is from the first film as well.  Sean Hayes reprises his role as Mr. Tinkles who is in captivity and caged like Hannibal Lecter which adds to some funny moments.

Wallace Shawn lends his voice to Calico which has you waiting to hear the phrase "Inconceivable" (you can’t help it).  A scene where they make fun of a cat lady and her house of "Stoner" cats had the parents cracking up and the little kids "not getting it".

Cats and Dogs: The Revenge of Kitty Galore was absurd, unrealistic but highly entertaining for the whole family.  Dragon Blogger rates this movie 3 out of 5 stars.

Note:  The only quip I have about the movie is the animatronics are overly "fake" looking and the scenes that keep switching back and forth between the live animals and the fake puppets detracts from the overall film.